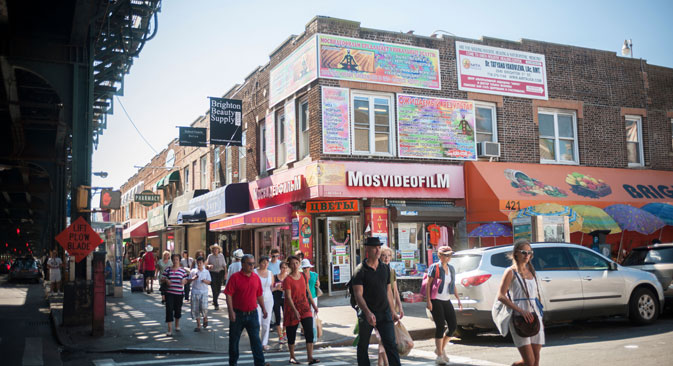 Russian New York is immediately associated with Brighton Beach, but the influence of Russian immigrants can be felt in other parts of the city as well.

Russians have been living in New York City for about 200 years. The first significant wave of immigrants from the Russian empire began in 1881, although there were Russians living in the city earlier.

The network of Russian businesses, schools, stores and restaurants that exists now in the Big Apple is as much a part of the fabric of the city as Chinatown, although maybe not as noticeable. 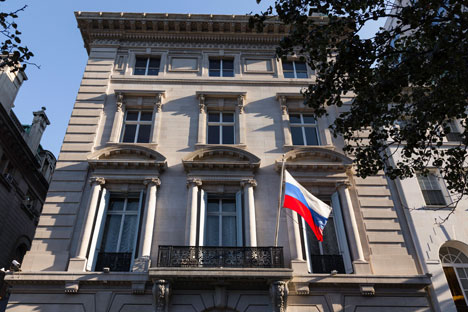 The Consulate General of the Russian Federation. Source: Press Photo

Holidays special to Russia are also celebrated in the consulate, which overlooks Central Park. Among the regular festivities are annual celebrations of Orthodox Christmas and International Women’s Day, commemorative events for the Battle of Stalingrad and Victory Day.

Fundraising for the cathedral, built in a style based on the Moscow Baroque, began in 1894, but it was 1902 before the first service was held there — and the building still wasn’t completed.

The representative office of the Moscow Patriarchate is located in the adjacent building, since the cathedral is a Russian Orthodox-Moscow Patriarchate Church, not a part of the Orthodox Church in America. The whole complex was recognized by the city of New York as an architectural masterpiece in 1973.

A lesser-known contribution of Russians to the city of New York is a statue of Vladimir Lenin.

Located on the top of the Red Square apartment building, (250 E. Houston St.) in the East Village, the 18-foot tall metal statue greets the city in an unexpected salute from the Communist world to the capitalist one.

The owner of the building, a former radical sociology professor at N.Y.U., bought the statue from Russian artist Yuri Gerasimov after the collapse of the Soviet Union.

It opened on May 24, 1986 — Brodsky’s birthday. Russian Samovar has welcomed Russians, Americans and tourists of all kinds, but the role of creative types — writers, musicians and artists —has remained strong through the years.

The restaurant often features lives music, both instrumental and vocal. 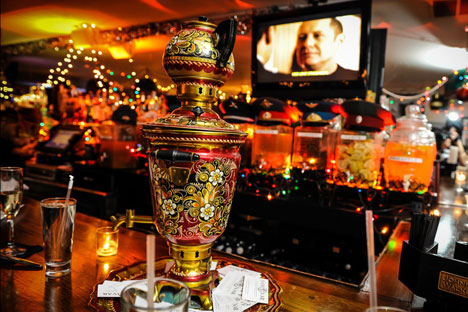 A newer Russian addition to the restaurant scene is Mari Vanna (41 E. 20th St.), which occupies a busy spot between between Flatiron and Gramercy.

Inside, Mari Vanna is furnished with typical elements of a Soviet home — crystal bowls, homemade-looking chandeliers, framed black-and-white pictures and other memorabilia that evokes nostalgic feelings in the heart of every guest who was born in or ever visited Soviet Russia.

Mari Vanna is good for an unusual spin on a business lunch ($24 covers an appetizer, a soup and a main course) or a dinner. The restaurant’s specialty is a wide selection of infused vodkas. 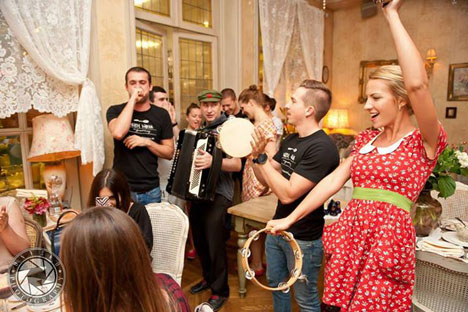 The most popular is the one infused with horseradish, but cranberry, honey and pepper-based “nastoykas” are also popular.

The Russian American Cultural Center (520 E. 76th St.) is dedicated to introducing the multinational population of the tristate area to the latest in Russian culture. Art and literature events, film showings and concerts are spread out over a few dozen different venues.

Among the current and upcoming RACC events are a talk about the social role of Jewish humor by Hunter College professor Emil Draitser (May 9, Hunter College, CUNY) and the poetry Compass award competition, which this year is dedicated to poetry of the father of Russian film director, Arseny Tarkovsky. Submissions are being accepted through July 31.

The Museum of Russian Art (80 Grand St., Jersey City, N.J.) started off by showing unofficial Soviet art that mainly came from a private collection of Alexander Glezer, one of the organizers of the infamous Nonconformist “Bulldozer Exhibition” in the Soviet Union in 1974.

The museum has moved on to younger generations of various Russian and Russian-American artists, and is currently hosting an exhibit of Daria Bagrintseva (March 29–April 6). It will feature the artist’s works from abstractionism to erotica.

According to Alex Rubin, who has spearheaded the initiative, the decision to give Dovlatov’s name to 63rd Drive in Forest Hills, Queens, where the writer lived and his widow and daughter still reside, should be made by the city officials within next few months.

If passed, Dovlatov Way will be the second street in New York named after a prominent Russian, after the Sakharov-Bonner corner, which commemorates the famous Soviet dissidents and activists Andrei Sakharov and Elena Bonner. The corner is located at the southwest corner of Third Ave. and 67th Street. The petition for Dovlatov Way at change.org currently has more than 14,000 signers. Organizers hope for 20,000.

Need a special gift but don’t want to go all the way to Russia to get it? Visit the new location of the Saint Petersburg Global Trade House (261 5th Ave.). Giant fur hats? Check. Russian nesting dolls? Check. From St. Petersburg Imperial porcelain to wooden jewelry to wool and silk shawls and the wobbly toys so loved by generations of Soviet kids, shoppers are sure to find a unique gift or a nice souvenir for themselves.

Of course there would be no Russian New York without Brighton Beach. This neighborhood, forever linked to Russian speakers, is located in southern Brooklyn bounded by Ocean Parkway, Belt Parkway, Corbin Place and the Atlantic Ocean. It’s also sometimes known as “Little Odessa”.

As the story goes, that part of New York was chosen by Soviet Ukrainian-Jewish immigrants of the third and the post-perestroika waves for its similarity with the Black Sea city of Odessa. Many establishments here, especially those located on the main strip, still use Russian as their main language and feature window signs in Cyrillic.

The Millennium Theater (1029 Brighton Beach Ave, Brooklyn) is currently being rebranded by a new owner, but it is sure to remain one of the main cultural venues in Brighton Beach. It has hosted events ranging from Russian Film Week to the Russian comedy show KVN to a staging of “Chapaev and the Emptiness,” based on the book by contemporary writer Viktor Pelevin.

Russian influence can even be found across the river in New Jersey. The Teadrop monument (51 Port Terminal Blvd., Bayonne, N.J.) was built by Russian artist Zurab Tsereteli to commemorate the victims of 9/11.

This monument to the Twin Towers looks almost as if it represents a single building because such was the view from the vantage point of the peninsula at Bayonne where the monument is erected.

In a speech accepting the monument in 2006, former President Bill Clinton said that Tsereteli’s sculpture had caught “feelings that cannot be expressed by words.”

Read more: When the Russian navy sailed into New York>>>