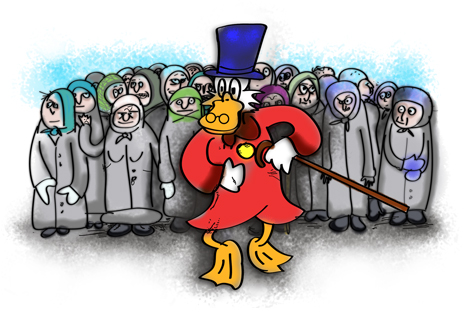 Money has been the source for an entire vocabulary of slang. In the past, the most common slang words for money were cabbage and dough.

The word “money” has spawned many slang synonyms in Russian. Some of them become supplanted by others, but there is a constant: As is the case for the lexicon referring to cars (which became “wheelbarrows”), the words that prevail are demeaning, thus belying a serious relationship with money.

In Russian as in many other languages, money has been the source for an entire vocabulary of slang. During the Soviet era, the most common slang words for money were cabbage (kapusta - капуста) and dough (bashlee - башли).

The cabbage analogy is logical: in a packet of bills it is possible to see something that resembles cabbage leaves lying against one another. As for dough, linguists believe this term derived from the Hebrew word bishul, which means “to cook.”

Profits from an intermediary transaction are informally known as fat, that is, literally “what appears on the top of a liquid food when it is cooked.” (In an old joke, a “businessman” buys eggs for a ruble, cooks them and then sells them for a ruble. When he is asked what he got out of this, he answers, “Fat!”)

And yet, the term old woman (babki - бабки) overshadowed both cabbage and dough in terms of popularity. The origins of this word as a synonym for money are not entirely clear. According to one theory, in the 18th century the bills bearing the image of Catherine II were called by this name. However, women’s images have not appeared on notes since that time.

After old woman triumphed over all its rivals and the term entered into general use, it gave rise to a new alternative — bablo (бабло), or “loot.” During the late 1990s, a popular saying went: The late 1990s saw the birth of an ironic and slightly cynical proverb: “Loot conquers evil” (Бабло побеждает зло).

When the law changed in the early 1990s to give Russians the right to possess foreign currency, new words quickly cropped up. In the slang words for the dollar, the bill’s color figured prominently: dollars were called “greeny” (гринами) or simply a derivative of the Russian word for green (зеленью).

Their related English slang term also made an appearance: “bucks” (баксы). This led to another term, Baku roubles. (бакинскими рублями).

Foreign money came to be known officially by an acronym, SKV, which stood for the Russian words “freely convertible currency” (Свободно Конвертируемая Валюта). When it was still impossible to freely change rubles to another currency, they were commonly called “wooden” (деревянными) — in contrast with the full-valued rubles of tsarist Russia.

During the period of rampant inflation of the early 1990s, stores started setting prices not in rubles, which were quickly losing value, but in dollars. However, because the dollar was barred as an official means of payment in Russia, price tags were marked with the price in “u.e.” (for uslovnye edinitsy (Условные Единицы), or “conventional units”) along with the current value of the “conventional unit,” which usually coincided with the current value of the dollar.

This period also saw the revival of a term for money that had been nearly forgotten since the inflation of the 1920s: lemon (лимон).

Although in the 1990s 1 million rubles was a rather small sum, after the ruble’s denomination and stabilization, the figure of a million regained its symbolic significance. Russia also has a popular TV show called “Who Wants to Be a Millionaire?” although the top prize is not one million, but three million rubles – about $100,000.

Other English words have also made their way into Russian slang.  Russian hippies were calling money “price” (прайс) as far back as the 1970s, while the word “cash” (кэш) has become a broker’s term today, but the Russian term nal нал) (a short form of nalichnye (наличных) which is translated as cash but literally means “available” is used more often.

In addition, it goes without saying that mani (мани), a mispronuciation of “money” is also a stalwart. The word gained popularity as early as the 1970s through songs by ABBA, Pink Floyd and Liza Minelli (in the film “Cabaret”).

In contemporary Russia, this trend has been continued by Sergey Shnurov, the soloist for the irreverent group Leningrad, who rhymes “money” (мани) with na karmane (на кармане) (“in the pocket”):

It’s nice when in the pocket

When you’ve got old women, you feel like a million