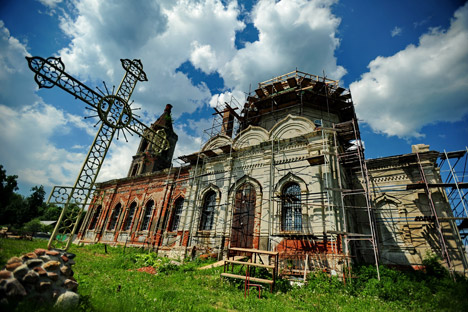 The resurrection of the Russian church began in 1988, when Orthodox Christians celebrated the one thousandth anniversary of the Baptism of Russia. Pictured: A church in Rozhdestevka village, Moscow Region. Source: ITAR-TASS

The destruction of churches in Russia is a real cultural catastrophe. However, many young volunteers have recently begun helping to restore the buildings.

Moscow is famous for its abundance of Orthodox cathedrals and churches, built in a whole variety of styles during completely different historical periods. However, an inhabitant of pre-revolutionary Russia would gaze up at these cathedrals with tears in his eyes – before 1917, in central Moscow alone, there were about 850 functioning churches. By 1991, after 70 years of Soviet power, there were fewer than 200 churches in the whole city. Churches were either destroyed completely or converted into shops, planetariums, cinemas and warehouses.

The religion which was not lost

The Bolsheviks fought the Orthodox Church which had unified Russians in an ideological way. But churches are not only religious buildings. They are also outstanding monuments of architecture and art. As Bill Murray once said in an interview to Ogonyok magazine: "War destroys people, but they are born again. But if you destroy their art, then you destroy their souls." 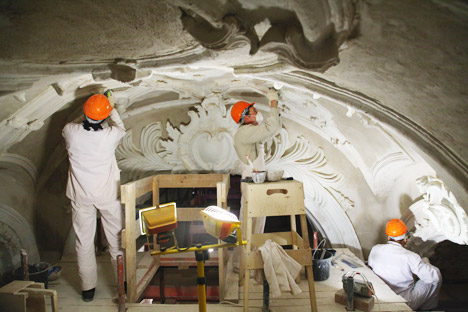 The resurrection of the Russian church began in 1988, when Orthodox Christians celebrated the one thousandth anniversary of the Baptism of Russia. The restoration of destroyed cathedrals is actually a lengthy process. First, you must find out who actually owns the building: the local rural district or the eparchy.

After that you have to obtain the blessing of the priest and to ensure support from the eparchy: until the church opens a parish, the eparchy will not be able to help restore the cathedral. Besides this, to open a parish you must gather a group of at least 20 people. Neither the state nor the Russian Orthodox Church takes on obligations for the restoration of churches and the opening of parishes – all of this is up to the faithful and enthusiastic local historians.

The charity organisation 'Selskaya Serkov' (Village Church) saves dying rural cathedrals: members of this organisation remove trees from the roofs; they clear broken bricks from the building, and conduct accident prevention work. This organisation exists on charitable donations and subsidies. 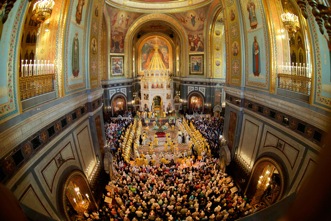 “During the last 20 years we have conducted a full restoration process in four churches, and accident prevention work in 12 churches, and our hands have touched more than 50 churches,” says Svetlana Melnikova, director of Selskaya Serkov.

“Sometimes while driving through the Tver region I look around and my heart bleeds at the sight of ruined and half destroyed churches. Even though nobody asks us to, we still stop and try to clean the cathedral of all the trees and grass. Often we volunteer to mow cow parsnip, which gradually destroys buildings. And it needs to be mowed three times during the summer! We receive a great amount of letters from all over Russia, many of which are from young people, saying 'help us save this beauty! Help the church!'"

Orthodoxy without a mask

In 1961, the Church of the Nativity of the Blessed Virgin, which was built in the18th century in Malye Vsegodichy in the Vladimir region, was targeted by thieves.

The criminals looked for valuables and dug up graves. A few years ago, at the initiative of Alexei Strizhov, a Muscovite, local villagers decided to rebuild the cathedral. The parish includes 15 whole villages which make up the district. However, only some 30-40 people attend services and 10 are involved in the church restoration process. “I believe that there aren’t any actual Orthodox people left, there are only people with Orthodox masks on,” says Strizhov. 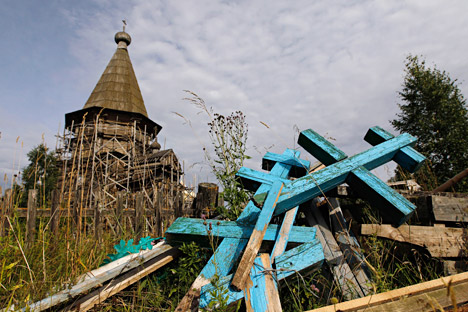 Neither the state nor the Russian Orthodox Church takes on obligations for the restoration of churches and the opening of parishes. Source: RIA Novosti / Alexey Kudenko

“Everybody is busy baptizing their children, because they want to be 'good', but in reality their actions differ from this intention. Even when they come to help build and restore churches, people often just hang out and have drinks, instead of helping to build.”

Strizhov said that there are now 170,000 people, including 130,000 adults in the area where he has been living since moving from Moscow. If all these people chipped in and donated $100, then “each month we would be able to restore one cathedral in our district.”

The restoration process at the Church of the Nativity of the Blessed Virgin is going very slowly. Five million rubles are needed to reconstruct the church, and Strizhov has only collected 240,000 now, and 150,000 roubles in the past. “Right now the main thing is to stop the destruction of the church,” he said.

The destruction of churches in Russia is a real cultural catastrophe. However, many young volunteers have recently begun helping to restore the buildings. They, along with history and architecture enthusiasts offer hope for the best.

Even in the darkest times, when churches were massively destroyed, there were still people in Russia who devoted all their strength to honour the legacy of the past. Peter Baranovsky, an art historian, is one of them. In the midst of the anti-religious movement, he rescued monuments of ancient architecture and campaigned to create museums there, to guarantee the safety of the buildings themselves. Baranovsky saved more than 90 cathedrals and churches. He founded the Kolomenskoye museum and a museum of the famous icon painter Andrei Rublev in the Andronicov monastery, which saved it from demolition.

According to legend, Baranovsky sent Stalin a telegram about the impermissibility of demolishing St. Basil's Cathedral, one of the symbols of Moscow and Russia. For his efforts, Baranovsky suffered repression and spent three years in a labour camp.