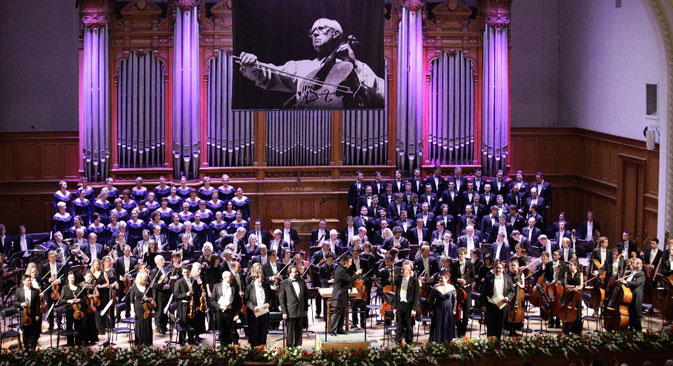 The Russian premiere of an unfinished opera by the great musician Dmitry Shostakovich was recently presented in Moscow.

Orango the ape shuffles before the Palace of Soviets, to the sounds of a jeering crowd. This is not just any chimpanzee, the ringleader proclaims: Orango can eat with a knife and fork, blow his nose, and even play “Chizik Pyzhik,” the Russian nursery rhyme character. Orango is half-ape, half-human, a grotesque capitalist experiment who now resides in the Moscow circus.

Such is the bizarre, fascinating conceit of “Orango,” the unfinished comedic opera by Dmitry Shostakovich. In 1932, the Bolshoi Theatre commissioned “Orango” in honor of the 15th anniversary of the October Revolution, but the project was soon abandoned. Nothing was known of it until 2004, when Olga Digonskaya, a musicologist at Moscow’s Glinka Museum, stumbled across a piano score for the prologue in Shostakovich’s archives.

Digonskaya called her discovery “an unbelievable stroke of luck.”

“My hands and legs were shaking,” she said. “I felt like Sherlock Holmes.”

After premiering in Los Angeles in 2011, “Orango” was performed for the first time in the composer’s native country on Friday, when Finnish conductor Esa-Pekka Salonen led the London Philharmonic Orchestra and the Yurlov Russian State Academic Choir in a concert at Moscow’s Conservatory.

“I’m so happy that it is finally being heard in Russia, by Russians, in Russian,” Shostakovich’s widow Irina said just before the concert, which was part of the UK-Russia Year of Culture and the International Rostropovich Festival.

Like Mikhail Bulgakov’s “Heart of a Dog,” “Orango” satirized the utopian science of the 1920s – namely, the ape-human hybridization experiments of the Soviet scientist Ilya Ivanov. After being sent to Africa on a mission to inseminate female chimpanzees with human sperm, Ivanov set up a primate lab in Sukhumi, where he continued his experiments until being arrested in 1931.

Shostakovich toured Ivanov’s lab when he was vacationing near the Black Sea; in a letter back home, he dismissed it as unimpressive. But his memories of Ivanov’s apes came in handy several years later when he received the commission to write “Orango,” based on a libretto by Alexander Starchakov and Alexei Tolstoy.

Russian Britten: A bond of friendship through the language of music

In the prologue, the master of ceremonies recounts Orango’s tale on the forecourt of the Palace of Soviets, Stalin’s titanic, unrealized skyscraper. Orango is the creation of a French scientist, he explains. After getting rich as a corrupt newspaper magnate, his simian, barbaric qualities became increasingly pronounced, and he was eventually sold to the Soviet circus. The prologue concludes with the crowd’s hysterical chant of “Laugh! Laugh! Laugh!” as the ape-man panics and struggles to breathe.

According to McBurney, “Orango” contains direct lifts from other experimental pieces Shostakovich was working at the time, including “Hypothetically Murdered” and “Lady Macbeth of the Mtsensk District,” as well as “a series of gags about Russian classical music,” particularly Mussorgsky’s “Boris Godunov.”

“There were some bits where I thought, ‘Holy cow, this is different,’” McBurney said. “He was such a fearless acrobat of sound.”

Conductor Salonen described “Orango” as “an outrageous melange of styles,” noting the influence of Shostakovich’s trip to Berlin, where he heard jazz and music by Kurt Weill.

“It’s like being at a fun fair, and being dragged into the spectacle,” said mezzo-soprano Sally Silver, who sang the role of Suzanna, Orango’s Parisian socialite wife.

Why “Orango” was abandoned remains a mystery, but the opera’s wickedly satirical spirit was likely a factor. By puncturing grand numbers with ironic jokes, Shostakovich mocked the very kind of triumphal spectacles that the Palace of Soviets was being built to hold. “What they had in mind was a celebration of the 15-year anniversary, but this was a parody celebration,” McBurney said.

By the end of 1932, the shift to Socialist Realism was already underway, and the opera’s style was quickly becoming out of date. In 1936, Shostakovich’s “Lady Macbeth” would be attacked in an infamous Pravda editorial, “Muddle Instead of Music.” The next year, librettist Starchakov was shot in Stalin’s Terror.

Digonskaya initially hoped that Moscow’s Helikon Opera would be the first to perform “Orango,” but the project died due to a lack of funding. “It’s a shame that Russia was only third [after Los Angeles and London],” she said.

However, the time may be ripe for Russian orchestras to take on “Orango.” “Now they’ll all jump on it, I’m sure,” said Olga Rostropovich, head of the Rostropovich Festival. According to McBurney, Valery Gergiev is one of several Russian conductors who have expressed interest.

“There will be more discoveries. Of that I’m certain,” she said, as the crowds filed out of the Conservatory.