Pistols at dawn: The Soviet Eastern versus the Classic Western 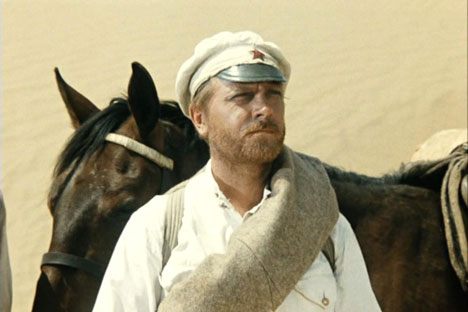 Comrade Sukhov from 'White Sun of the Desert.' Source: kinopoisk.ru

The Eastern is a cinematic genre that originated in the Soviet Union during the Cold War and that features all the traits common to its American ancestor, the Western. Although the people divided by the Iron Curtain held different worldviews and ideals, Soviet and Western spectators shared a love of chases, fights, shootouts and swashbuckling adventure.

The Soviet Eastern has two subgenres: the Eastern itself and the “Red Western.” The Red Western is virtually a copy of the American original: It is a film about cowboys and Indians, and the setting is the Wild West (for example, Vladimir Weinstock’s Armed and Dangerous, or the comedic Western A Man from the Boulevard des Capucines). Yet while real indigenous people acted in American films, in Soviet cinema the Indians might be played by Bulgarians, Serbs or Mongols.

The setting of the Eastern is the East, not the West — it takes place in the Asian republics of the Soviet Union (White Sun of the Desert, Officers, some episodes of The State Borders).

The first American Westerns took place during the American Indian Wars, the period of settlement of the wild territories of the West. Other possible settings were the American Civil War period or the early 20th century.

The setting of the Eastern is one of the most dramatic moments in the nation’s history: the Civil War or the turbulent decade immediately following it (White Sun of the Desert, Nikita Mikhalkov’s At Home Among Strangers, Edmond Keosayan’s The Elusive Avengers).

The protagonists: Red Army soldiers and the friends of the palefaces

In the early Westerns, the main protagonist — a cowboy, pioneer frontiersman, or the sheriff of a border town — is irreproachably virtuous and honest. Generally, he is a solitary hero seeking adventures, and sometimes a nomad. He might rob banks and trains, shoot left and right, and kidnap young women. He is an excellent shot (he often shoots from the hip and always without missing), a supreme rider, and an egocentric individualist, even-tempered and independent. He pursues only his own goals, whether they be for profit or revenge.

The moral constitution of the Eastern’s main protagonist, on the other hand, is always impeccable. He performs actions with dedication and in the name of the common good. The Soviet film censors simply forbade any other variations. The hero is in no way an individualist or loner; he almost always belongs to some sort of collective or association (for example, the Red Army or Cheka), and strives for lofty goals.

A feature of the Eastern is the international makeup of the good characters: Yashka the gypsy in The Elusive Avengers; Sayid the native of Central Asia in White Sun of the Desert.

Moreover, the main character in the Soviet film does not necessarily display “heroic” traits or exceptional talents. He might be physically weak, a poor horseman and an imperfect shot, like Mr. First in A Man from the Boulevard des Capucines, or the young soldier Petrukha in White Sun of theDesert. His main strength is his awareness of his ideological rectitude.

In the classic Western, the good characters are always the cowboys, while the Indians are depicted as exaggerated villains.

Christians and peaceful city-dwellers are portrayed superficially; usually these are people who are incapable of defending their positions, and who recognize the power of the strong and expect help from them (TheMagnificentSeven).

The Red Western, meanwhile, depicts the Indians with sympathy, as an oppressed people that are fighting for their rights. It goes without saying that the Christians themselves have the most positive characteristics.

American specimens of this cinematic genre nearly always have a love interest. The heroine is a noble-minded girl, a sacrifice, as in Mackenna’s Gold, and sometimes an adept swindler or even a prostitute. The hero of the Western has many former lovers — he is successful with the ladies.

As for the Eastern, for the most part there is no love interest. The exception is the Red Western, which has a heroine (for example the daughter of the plantation owner Poindexter in TheHeadlessHorseman; or an idealized singer from the saloon), but on the whole a hero in love might be rather inexperienced and unlucky.

The Eastern is notable for the general absence of a romantic plotline. The hero may already be married (like Sukhov in White Sun of the Desert, who writes letters to his beloved), or simply too busy with thoughts of world revolution. Sometimes, as in At Home among Strangers, female characters may be entirely absent.

Read more: Bondarchuk’s ‘Stalingrad’: In the trenches of IMAX