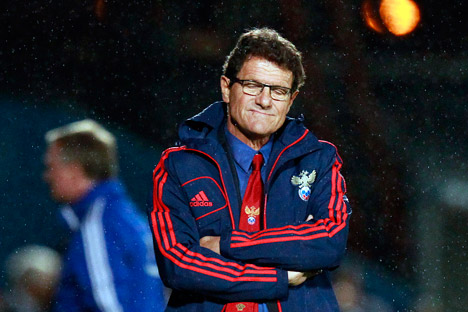 Capello: Brazil 2014 will help us gain experience of the real thing ahead of the following World Cup in Russia. Source: Reuters

Coach Fabio Capello is thinking long-term when assessing his squad's chances for this year’s World Cup in Brazil.

In modern football, it almost never makes sense for a manager to make long-term plans. After all, chances are he won’t be around to put them into practice.

Four years is an eternity, almost four times the average reign of a Premiership manager – less if you discount long-lived anomalies like Alex Ferguson and Arsene Wenger, who seem like creatures of another age.

So why then is ex-England boss Fabio Capello planning four years ahead in his new job with Russia? Worse still, he’s committing the cardinal sin of suggesting the upcoming World Cup isn’t the be-all and end-all of his career.

“Brazil 2014 will help us gain experience of the real thing ahead of the following World Cup in Russia,” he told the FIFA website in January. The 2014 World Cup – not the “real thing”? Heresy, surely?

Perhaps aware he had let something slip, Capello has been more circumspect since then, returning to more typically vague manager-speak. “I’ve always been an ambitious person, but the most correct strategy is to progress from match to match” was the entirely unhelpful answer he gave earlier this month when asked what his target was for the Brazil tournament in June and July. Only grudgingly did he admit that qualifying from the group stage would be a minimum standard of success.

Of course, being a 67-year-old multimillionaire with eight Serie A titles gives you the sort of perspective denied the typical layman, but Capello is in something of a unique position in Russia.

Unlike his fraught four-year reign with England, when he butted heads with FA bosses and eventually quit rather than submit to their demands to strip John Terry of the captaincy, Capello has almost untrammeled power in his new role. With his focus firmly on Russia’s first home World Cup in 2018, he has been given sweeping powers to oversee the country’s national sides from youth level to the senior team. That allows him to take the long view and bring through young talent in time for the “real thing.”

Russia’s qualifying campaign for Brazil 2014 went surprisingly smoothly as they won their group ahead of favourites Portugal, but a 1-0 defeat to Northern Ireland and a 1-1 draw with Azerbaijan flagged up problems breaking down stubborn, if unskilled defences. That is exactly what Russia will have to do in Brazil, where the draw pits them against defensively-oriented Algeria and South Korea in the group stage, as well as more attack-minded Belgium.

There are echoes there of England’s ill-fated 2010 World Cup campaign and their uninspiring goalless draw with the Algerians, something Capello acknowledged earlier this month. “I remember how Algeria can play from my work with England national team,” he said.

Russia have played only one game in the last four months, a solid 2-0 friendly win over Armenia in March, but the basic shape of the team is already clear from qualifying. Using a formation that shifts around but is basically 4-1-4-1, the Italian’s tactics are much like his England days, but Russia’s players give them a different spirit.

Jacques Rogge: Possibility of Summer Olympic Games in Russia can be discussed after 2018

Russia boast a wealth of midfield talent, led by captain Roman Shirokov, well known for his bombing runs from deep for Zenit St. Petersburg, alongside dependable Denis Glushakov and set-piece specialist Alexander Samedov, who has developed rapidly since being handed his international debut by Capello. The Italian has also managed to keep a lid on potential tension in the squad – Shirokov and fellow midfielder Igor Denisov have both clashed with their club management, but that has not been replicated in the national side.

In defence, veterans of Russia’s run to the Euro 2008 semifinals cling on, but have become less reliable and will not be around for 2018. In anticipation of that, Capello has been trying to blood new players like Dynamo Moscow right-back Alexei Kozlov and CSKA Moscow’s left-back Georgy Shchennikov, both of whom are likely to travel to Brazil and could play a big part in the years to come. CSKA goalkeeper Igor Akinfeev is one of the world’s best and the undoubted first choice for Capello.

In attack is where Capello has problems. Longtime front-man Alexander Kerzhakov has become something of a sideshow at Zenit, struggling for playing time as Brazilian star signing Hulk runs the show. Alexander Kokorin is Russia’s only really promising young striker, but so far he lacks the muscle to be a lone striker in Capello’s preferred formation. Third-choice Fyodor Smolov only recently ended a 21-month wait for a goal in a competitive match and is the butt of jokes from Russian fans.

While Capello looks to 2018, so too is the Russian government, but its preparations seem to be going rather less smoothly than those of the team’s Italian coach. Some stadiums are finished or nearly so, including Spartak Moscow’s new ground and the stadium in Sochi that held the Olympic opening ceremony, but they were already planned before 2010, when Russia won the right to host the World Cup.

Eight more stadiums, including the venue for the final, Moscow’s Luzhniki, are either to be built from scratch or need near-complete redevelopments of existing grounds, but so far they all remain without confirmed designs. Basic building work has started, but there is a limit to what can be done without a final plan, something that annoys Sports Minister Vitaly Mutko.

“The pace of designing the stadiums gives cause for alarm,” he told regional officials last month. “Deadlines are being broken, there are problems in every region.”

Of course, this could just be smart politics, a warning that delays will not be tolerated as the World Cup draws closer, and there remains plenty of time to sort out problems. Four years ago, Sochi’s Olympic Park was still a barely-landscaped marsh, after all.

Capello’s footballers may be gearing up for Brazil 2014 but they and the country are really preparing to host Russia 2018. The coach needs new players, the country needs new stadiums, but all eyes are on “the real thing.”