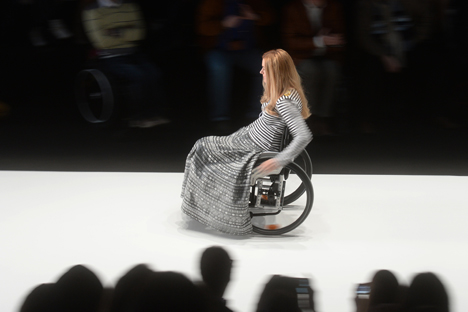 Russian designers are focusing more and more on clothing for physically challenged people. Whole collections are now being designed consisting of everyday outfits, children's suits and evening gowns for people in wheelchairs, as well as for those who suffer from infantile cerebral paralysis (ICP) or have undergone amputation – that is, strong people who are striving for beauty.

Over the last century, Russian society developed discriminatory attitudes towards people with disabilities. Most adults try to tactfully ignore the disabled, and children frighten each other, saying: "Don't look [at the disabled], otherwise you'll become like this."

In the Soviet Union, people as elsewhere, got injured and wounded or were born with a peculiar set of chromosomes, but their way diverged from the “ideal” of a country which proclaimed itself to be striving towards a bright communist society.

"In fact, there is not yet a full-fledged market in clothes for people with disabilities in Russia. That is, there is demand, and therefore this niche is presently open for business. What is important is to observe a balance between the need to provide special conditions for sale and reasonable prices for products," says Oksana Liventsova, a designer who has developed a collection for people with ICP.

Yet over the past couple of years, things have definitely started to move forward. Urban environments have gradually begun to acquire a friendly look: Special ramps in subways and lifts to footbridges have appeared. All sorts of organizations that help people with disabilities to feel beautiful have begun to spring up and now actively operate around the country.

One of these organizations is the Bezgraniz Couture (“Couture Without Borders”) project. It was founded in 2010 by Yanina Urusova, a social entrepreneur, and Tobias Reisner, director of a social fund called Dialogue in the Dark. The project aims to encourage professional designers to develop clothes for people with disabilities and special needs.

The project has been growing in popularity every year. The Bezgraniz Couture 2011 First International Competition involved about 60 designers from different countries, and a couple of years later this number had risen to 80. In 2014, the fashion show formed part of Mercedes-Benz Fashion Week Russia. At one of the event’s venues, in Moscow's Manezh, designers Daria Razumikhina, Masha Sharoyeva, Sabina Gorelik, Oksana Liventsova, Dima Neu, Svetlana Sarychev, Albina Bikbulatova, Christina Wolf and Miguel Carval showed off their work.

"People with limited physical abilities want to dress up," says Daria Razumikhina, a designer that has developed a collection with striped sailor vests at its core, as well as brightly-coloured cardigans and spectacular ornamental skirts made of thick fabric which sits well and does not get into the wheels of wheelchairs.

This year, the designer duo of Dima Neu and Svetlana Sarycheva have developed a line of sportswear for people with prosthetic arms and legs. The special feature of this collection is a voluminous bag which, apart from its main purpose, also compensates for the absence of a symmetrical load on the spine due to the loss of an arm.

Oksana Liventsova, meanwhile, has come up with a collection named Odyssey for people with ICP who have difficulties coordinating their movements. Her transformer models, in which some elements fit tightly and support the body while others create volume, come with comfortable easy-to-use zip-fasteners and hooded collars.

"To create industrial production-ready collections, we need entire experimental laboratories engaged in researching specialized techniques for fitting and various ways of using different stiffeners to support the spine and other parts of the body. This requires an approach completely different to the normal one used when designing conventional clothes," says Oksana Liventsova.

There is another organization in Russia dealing with the problems of people with disabilities and issues of adapted fashion – a community called Ortmoda. At Ortomoda, they not only create fashion for people on disabilities, but also provide jobs for them. For example, Maxim Katush, who has a hearing disability, is responsible for their website, and has recently also became a model who demonstrates modern menswear for young people.

Alexandre Vassiliev on history of fashion

A modeling school for disabled people, Special Fashion, has also appeared in Russia in recent times. The school's first fashion show was held in the city of Tyumen in 2005. Today, the Special Fashion project holds design contests for clothing adapted for people in wheelchairs, people with abnormal deviations in their figure and people with limited mobility, as well as for those who need the help of special walking aids to move.

It is therefore quite possible that the country will soon be able to enjoy not only the performances of its Paralympians but also international recognition for its young designers who are creating adapted designs and proving successful with Russians in wheelchairs – people who are strong and contagiously cheerful.