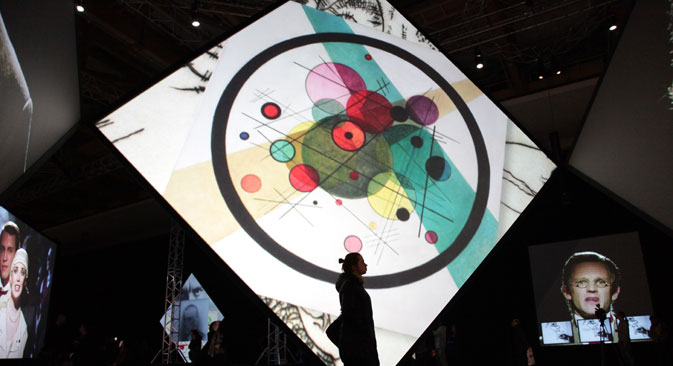 An exhibition of animations of classic art works of the Russian Avant Garde has been put together by British film director Peter Greenaway and his wife, the Dutch theatre director, Saskia Boddeke. The “Golden Age of Russian Avant-Garde” has opened in the Moscow Manezh as part of the Russia-UK Year of Culture.

Peter Greenway talked about the production of a film about Eisenstein, the life cycles of Russian art and avant-garde as illusion.

Kommersant: When and where did you become acquainted with Russian avant-garde for the first time?

Peter Greenaway: I studied to be a painter, and in the art school, Russian avant-garde was a part of the general theoretical course on the transformation of art in the 20th century. Until that time, artists were engaged in illustrating the Holy Scripture or ancient stories, and ideas that could be expressed in the portrait or landscape genres were associated with moralising and didacticism in one way or another. We can say that painting became a respected profession for the first time in the 20th century.

However, for me as a filmmaker, the avant-garde became relevant in connection with Sergei Eisenstein. By the way, I have just returned from Mexico, where we are shooting a film about Eisenstein’s work for the local film industry. To understand Eisenstein, one needs to dive deep into the artistic context of his times. And by the time I was 16-17, I had already known something about most of the key figures in the Russian avant-garde.

K.: What is your approach, your interpretation?

P.G.: In the West, people know Mayakovsky and Malevich, they know Rodchenko and Lisitsky a little less, but as for other avant-garde artists, their knowledge goes no further than their names and a minimal acquaintance with their works. And even in the case of the most famous figures of the time, we have only a very slight idea what kind of people they were. We plunged into the study of the context in order to incarnate them – literally – on the screen and to understand their psychology. My contribution to the final result is the text, or rather a collage of their manifestos, newspaper headlines, letters and so on.

I selected 12 characters of different degrees of fame and tried to get them to interact with each other. It is not that difficult to turn the avant-garde into a play: they talked all the time, argued, quarreled, sometimes very rudely – Malevich did not like Eisenstein, Kandinsky considered himself to be more talented than all the others, and so on. I did not want to turn it all into a melodrama, after all, the main thing here is their works, and words are only swarms around them.

In fact, my work limited itself to the script: everything you see is the work done by Saskia Boddeke. She managed to think up how to use my text, how to place screens, she selected actors (almost all of them are Russian). Initially we planned to do this project in the Tretyakov Gallery, and wanted to compare the golden age of Dutch art with the avant-garde, but this did not happen for financial reasons.

K.: What has been changed in the version for the Manezh?

P.G.: We had to concentrate exclusively on Russian artists. Dziga Vertov, El Lisitsky and Alexander Rodchenko turned to be perhaps the most important for me – to a large extent, these three artists began the things being practised everywhere now.

Of course, Mayakovsky is also interesting, but there is a problem in the translation, although we cannot say that this exclusively concerns the literature – as visual literacy also must be taught. We thought a lot about how to do this. I assume that an objective museum display just cannot exist. All museums were created artificially – someone built them and someone formed the collection. For example, Tate was built by sugar producers. Guggenheim Museum in New York was established by merchants.

K.: You always complain that there is no imaginative cinema, but only a literary one. However, when you find yourself in front of a picture, you are looking for a book, a detective story in it.

P.G.: Perhaps the most important historical work in English is “The History of the Decline and Fall of the Roman Empire” by Edward Gibbon. However, it is clear that Gibbon wrote not about Rome, but about Britain, deliberately selecting examples that would be relevant. History is our playground, and any actions in it are justified by the fact that we do not know how it all was in reality.

As for the images and texts, then, indeed, we perceive history primarily through written sources, and believe that they are authentic in some sense. Picasso painted variations on “Las Meninas” by Velazquez, Francis Bacon remade works by Raphael, and so on.

After that, most people, unfortunately for me, watch movies for the stories, and painting is no more than a tale for them.

K.: While studying the history of the avant-garde, have you found the answer to the main question about it - why did it end?

P.G.: I think that art trends have their own life cycles. At first, they are powerful, but their effect gradually dissolves and fades away. Besides this, history can demonstrate a number of examples of the short lives of art trends. The Pre-Raphaelites, for example, existed only for six months, and then they quarreled. However, I have digressed.

Mao Zedong was asked once: “What do you think about the French Revolution?” He replied: “It is still too early to draw conclusions.” This also applies to the historic position of the avant-garde. You have asked why the avant-garde ended, but people cannot even agree on the date of its beginning. Some people say that it dates back to 1905, while others believe that it started in 1917. According to some versions, the avant-garde ended by 1928, and perhaps existed until the early 1930s, when “socialist realism” was finally established as a style convenient to the authorities. However, actually, the avant-garde is a bit of an illusion, don’t you think?

K.: Do you work with art because it is difficult for you to find money for new movies? Or is the creation of such installations more interesting for you?

P.G.: Cinema has died and I even know exactly when it happened – on September 30, 1983, when the TV remote control appeared on the market. And now only a small number of people attend strange places known as the “cinema”, as compared with the watching of movies and videos at home. This is understandable – why should one sit in darkness? Man is not a nocturnal animal. Cinema has turned into wallpaper. Besides this, movies are based on literary narratives that have changed little since the 19th century.

Cinema does not have its own Joyces or Borgeses. For over 8,000 years, our life has been dictated by men of letters, they wrote all the holy books, all the instructions – from diapers to aircraft carriers. Maybe it is high time to change the paradigm in the digital age. However, cinema surely has nothing to do with this.