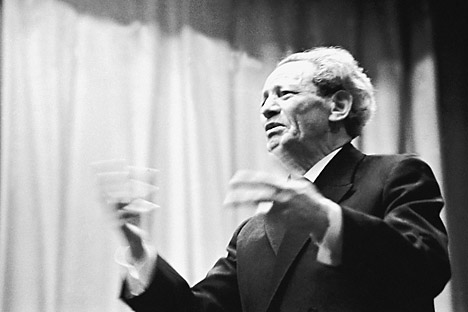 Magician, hypnotist, seer, psychic, Wolf Messing was a sort of Count Cagliostro, in terms of the mystery that surrounded him. Hitler was afraid of him, and Stalin and Beria took his words seriously. However, separating legends and myths from reality is almost impossible.

Wolf Messing was born in a Jewish shtetl in Poland in 1874, when it was still part of the Russian Empire. His parents wanted him to become a rabbi, and they sent him to a seminary. But Wolf was not as fond of the idea. He felt that he has another mission in life, and decided to escape. He ran off to the first train he could find and boarded. He didn’t have money for a ticket, so he hid underneath a bench to avoid the ticket inspector. But the inspector eventually found him, yanked him out from under the bench by his collar, and demanded a ticket. Wolf then handed him a piece of old newspaper. The inspector punched the paper and said: “You’re an odd duck, you know? Why are you hiding when you have a ticket?” This was the moment when Wolf realized he could manipulate people and alter their behaviour through the power of suggestion.

That train brought him to Berlin. At first he lived in poverty, washing dishes, shining shoes; starved to the point of fainting. Then he managed to get a gig at the circus. The acts he performed blew away his audiences and he quickly became popular. Only Messing could find hidden things, read minds, predict the future, and use the power of suggestion. And he did all of it without any trickery or the help of assistants. It wasn’t just magic tricks, but real miracle working and clairvoyance.

One day the circus stopped in Vienna while on tour. Two great scientists in attendance were interested in meeting the phenomenon Messing - Sigmund Freud and Albert Einstein. And so the three of them met up to do some experiments. Messing said to Freud: “Make a wish, and your wish is my command.” Then he came to Einstein, and pulled three hairs out of his mustache. “Is this what you wished for?” he asked, turning to Freud. “Yes,” Freud replied.

Messing was a frequent traveler. His experiments attracted the interest of a variety of people. Those who visited him include Mahatma Gandhi, Marilyn Monroe, and Polish President Piłsudski. When Hitler came to power, Messing returned to Poland. There, in one of Warsaw’s theatres, he made ​​his famous prophecy. Messing said: “If Hitler goes to war against the East, his death awaits him.” When the Fuhrer learned of Messing’s prophecy, he became infuriated. He announced a 200,000 Reichsmarks bounty on Messing’s head. The hunt was on. After the Nazis seized Warsaw, Messing was arrested by the Gestapo. The street patrol stopped him:

- You’re lying. You’re Messing. Let’s say hello to the Jewish magician! They’ve been waiting for you in Berlin.

And then the patrol punched Messing in the mouth. He lost consciousness and woke up at the station. Thankfully, his gift saved him. He was able to mentally order the Gestapo to go into the cell. They obeyed and went inside, not understanding what they were doing. Then Messing locked them inside and escaped, running off towards the Soviet border.

They were well aware of him in the Soviet Union. Stalin sent him a private jet and ordered him to be delivered to the Kremlin. Accompanying Messing, were NKVD men in uniform.

— Show me what you can do, — said Stalin. — Come visit me tomorrow out at my country-house. It’s simple. Judging by your reputation, you won’t even need a permit.

The next day, Messing passed unabatedly through all the security checks to Stalin's country-house. He convinced the guards that he was Commissioner General of State Security Beria, and thus he was able to pass through all the cordons.

The next test was more difficult. Stalin ordered Messing to go the state bank and take out one hundred thousand roubles, just like that, without a single document. When the day came, Messing drove to the central bank, entered the room, showed the cashier a blank sheet of paper and asked him to give him one hundred thousand roubles. The cashier did everything he asked. The magician put the money in the briefcase and returned to the Kremlin.

It is not known whether Mikhail Bulgakov had heard about Messing; it is likely though. However, in general, all these tricks were very similar to the ones Voland performs in ‘The Master and Margarita.’

While in Russia, Messing did not cease to engage in prophecy. First, he predicted the impending outbreak of war, missing the mark by just one week. He also said that the war would start in the last decade of June 1941. Then, before the war, he said he had visions of Soviet tanks entering Berlin.

He and Stalin had a complicated relationship. Of course, Messing was not his personal magician, as is commonly believed. Stalin had no need for a court magician. Yes, it’s true that Messing could read minds, but Stalin himself already knew the thoughts of his entourage; and he kept his own thoughts carefully concealed from the rest. Therefore he had no need for a telepath and psychic. It is also unlikely that Stalin would have liked that someone could read his thoughts. They met, but just a few times.

Nevertheless, Messing had an impact on Stalin. They say that Stalin was even afraid of him. The legend goes that when Messing secretly made ​​his way out to Stalin’s country-house in March 1953, Stalin asked him:

- So you can predict the future, right? Well do you know when you are going to die?

- After you, Comrade Stalin, – Messing responded.

- That means you know when I am going to die?

From the horror of this prophecy, Stalin’s eyes rolled back, his mouth fell agape, and his eyelids became heavy, just before collapsing onto the carpet.

Surely this is legend. But it’s hard not to like the story of a wicked king dying at the hands of a good magician…

On the other hand, Messing couldn’t save himself with his spells. The last years of his life he spent seriously ill and terrified of death. When he was taken from his home to have an operation, he said, looking at his very portrait, “It’s over, Wolf. You’re never going to see this place again.”

Messing died and his mystery has remained unsolved. Some say, classified documents related to Messing are still kept in the KGB archives. But none of the documents could surely explain his miracles.