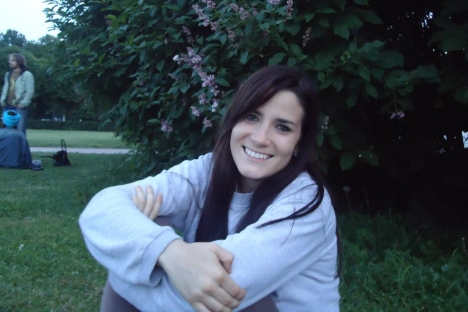 American journalist Louise Dickson arrived in Moscow two and a half years ago from Minneapolis. In an interview with Afisha Gorod magazine, she shared her impressions of the ups and downs of living in Moscow, including politics, sporting opportunities, gypsy taxis, difficult landlords and the Russian obsession with dill.

I came to Moscow in the fall of 2011. I did Russian history in college and, having completed my studies, decided to come here. I had found a job in Moscow while still in the States and in my first year here taught English at the English First language school.

Then one of my friends suggested I apply for a job with Russia Today, as several of my acquaintances were already working there. I have been working as a business editor with RT for nearly a year now.

When the events in Crimea started, it was hard, as many of my friends in America did not understand what was going on here and urged me to leave. It is not easy to stay here at the height of such important political events, especially when you don't quite agree with everything.

Now things have calmed down a bit, but I don't think we have seen the end of it. The crisis in Ukraine is continuing and no-one has yet come forward with a way out of it.

On getting around in Moscow

I am from Minneapolis, which has a population of two and half million people. So after that, Moscow seemed to me like a very big place. I lived in New York for a while but I like Moscow better: From the urban planning point of view, it is one of the most convenient cities in the world. Unless of course you are driving.

The metro here is much better and easier to use, although it does not run 24 hours. There are, of course, some unpleasant incidents: brawls or drunk people. But still I am not afraid of going by the metro on my own, even late at night.

I am quite comfortable about hailing “gypsy taxis”. I like that it is cheap - you can get almost anywhere for 300 rubles ($8.3) - and allows you to act more spontaneously as you don't have to wait for the taxi to arrive [“gypsy taxis” are private cars that offer a taxi service and can be flagged down anywhere on the street, thus obviating the need to call and book ahead –Ed.].

Of course, it is an expensive place. It is a well-known fact that in New York, a journey on the subway has always cost the same as a slice of pizza. In Moscow, I cannot even think of a similar equivalent. Everything here, with the exception of vodka and cigarettes, is getting more expensive all the time. Basically there are only three things that are cheap here: drinking, smoking, and using public transport. Having said that, renting a flat here is cheaper than in New York.

On housing and parties

I rent a flat near Park Kultury metro station and share it with two Russian friends. It is fun and I learn new Russian words every day. Of course, I sometimes have some disagreements with my flatmates. For instance, our fridge is always stuffed with dairy products, which I can't stand. Each time I open it and see all that milk, cream, sour cream, kefir, etc., my stomach turns.

Want to understand Russians? "Watch the film 'Irony of Fate'

I used to rent a flat in Taganka together with another American and an Irish girl. The people we rented the flat from were not very pleased to have foreigners as tenants, so they asked the woman who lived in the flat below us to keep an eye on us and call them every time something was wrong.

For example, she would report to them whenever we had a party, although we never invited more than 20 people. After one of those parties, the landlord and his wife came to see us, started to pick on us, finding fault with everything, and finally just told us to leave.

In America, we too have large parties at home, though usually people would come for a couple of cocktails and then go to another place to party. Whereas here, parties at home are a more serious affair, it is usually an adventure for a whole night. In recent weeks, I have had a farewell party to go to almost every weekend, as there is always somebody from among my friends who is leaving. It is a bit depressing.

At the same time, I make more and more Russian friends. What I like in Russians most is their sense of humor: I and my friends often joke about politics, we like being sarcastic.

On doing sports in Moscow

During a bike ride to the Novodevichy convent. Source: Personal archives

In the summer, Moscow is the best place on earth. There is something happening here every day, I don't miss a single open-air festival.

In the summer, I ride my bike. My favorite route is along the embankment from Gorky Park to Novodevichy Convent. I like the area near the Sportivnaya metro station.

Who said there's no way to ride a bike & look classy at once?

When my mother visited Moscow, we took a stroll there and she said it reminded her of a quiet neighborhood in New York, like South Brooklyn.

Moscow is far from an ideal place for cycling. For example, Minneapolis has a far better network of cycling routes and almost 20 percent of people there go to work on their bikes, even in winter. Over the past two years, I have seen many changes for the better, although still there aren't enough cycle lanes.

In winter I do cross-country skiing. I often ski in Sokolniki, in Neskuchny Sad, sometimes go to the country. I had to bring my skis from America though, as they are twice as expensive here.

On Russian food and Moscow restaurants

As for restaurants and bars, I go to the obvious places: Lyudi kak Lyudi, Solyanka, Produkty, Strelka. I also often go to Mayak, but I don't like it there as there is too much smoking. Of places that offer nice views of Moscow, I like Jerusalem, the rooftop restaurant at the synagogue.

I don't try to go to American places specifically, except for McDonald's – I love McDonald's. Of course, I have been to diners and burger places, like Beverly Hills or Shake Shack. They are similar to restaurants back home. You can tell it by the napkin that you put on your lap: if by the end of the meal it is all greasy, that means this is real American food.

In Russian cuisine, I – like many other foreigners – don't like the dill, which for some reason is added everywhere. When I eat out, I usually specifically ask not to be given any dill.

On the environment and littering

One of the worst things about Moscow is how dirty it is. At first I could not understand why everybody advised me to wear slippers indoors, which is not something we do in America.

"My life in Russia" : Anthony Arndt from Minnesota, USA

On one of my first days here I came to a friends' housewarming party and did not take my shoes off, and I remember that people were giving me strange looks. But when a couple of weeks later I had a look at the soles of my shoes, I realized why. Now I always take my shoes off when indoors and always carry my pair of slippers on the train or to the banya.

People in Moscow do not take particularly good care of their shared space, for example nobody cleans entrance lobbies or hallways in their apartment blocks. Often, when you are invited to somebody's place, you see a lovely, expensive, newly refurbished flat, but the entrance to the building is in a horrible state.

Also, there is a lot of litter in Moscow, as people don't use litter bins, spit everywhere, or park their cars on sidewalks. They sometimes even drive on sidewalks! I once was cycling on the sidewalk and I was run down by a car. Luckily, I was not hurt but I was shocked by that incident. I had thought that sidewalks were safe.