Bolshoi Ballet to go on tour in the U.S. in May 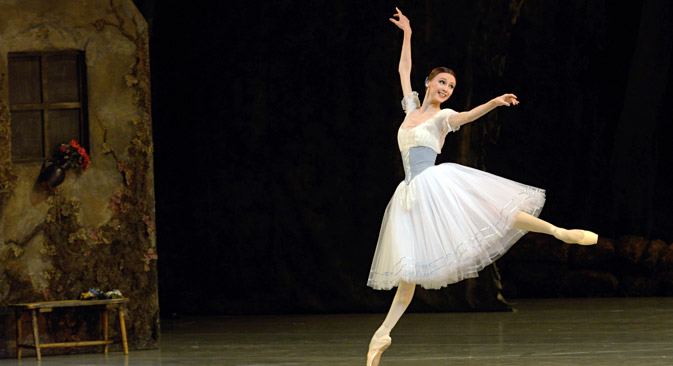 The renowned Moscow ballet company will also perform in New York in July. During the tour, the theater will present its classics – the ballets Giselle, Swan Lake, Spartacus and Don Quixote. Fans will also get the chance to see the Bolshoi’s premier dancer David Hallberg.

The Bolshoi Ballet is to visit Washington, D.C. on a tour from 20 to 25 May, and will also perform in New York from 15 to 27 July, RIA Novosti learned from Sergei Filin, the artistic director of the Bolshoi Ballet. Filin is hopeful that the planned tour will take place, despite the currently difficult political situation.

“This time, we will bring only one performance of Giselle to Washington, in the version by [Soviet choreographer] Yury Grigorovich,” said Filin.

He also confirmed the composition of the cast. “The first performance will take place with the participation of a beautiful couple, the star duo – Bolshoi prima ballerina Svetlana Zakharova and our theater’s premier David Hallberg. I am very pleased that David – a talented American dancer – will be representing the Russian theatre in the U.S. capital. I think this is a great story, especially in the current situation,” he said.

According to the artistic director, main roles in Washington will also be played by Anna Nikulina, Yekaterina Krysanova, Artem Ovcharenko and Ruslan Skvortsov. Giselle will not undergo any special editing, and will be shown to the American audience in the same way that it is performed in Moscow.

“In July, I hope, we will go on tour in New York City with an even larger cast – together with an opera troupe, a chorus and an orchestra. They are eagerly awaiting us there. I know this because recently I was in New York, and all the questions that people asked me concerned the arrival of the Bolshoi Theater. Everybody is living in expectation and anticipation of seeing the performances of our artists. And I have no doubt that the audience will be extremely interested,” said Filin.

The ballet company will give three performances in New York City: Swan Lake in the version by Yury Grigorovich, Spartacus, also Grigorovich’s original interpretation, and the ballet Don Quixote in the latest interpretation by Alexei Fadeyechev.

“Don Quixote is a real emotional Moscow-style performance, [with] which we can present and achieve special success today,” said Filin. The selection of performances was made jointly by the touring department of the Bolshoi and the inviting party.

“There is less of an ideological component here, a more business-oriented approach, as the people who are bringing in the Bolshoi Theater need to understand that they should have saleable performances. Traditional performances always enjoy great success, and today we have something to be proud of and something to show in these performances,” said Filin.

As for the opera troupe, it will present the opera The Tsar’s Bride in a concert performance, concluded Filin.

Based on materials from RIA Novosti and Interfax.