The blissful exile of Vladimir Nabokov 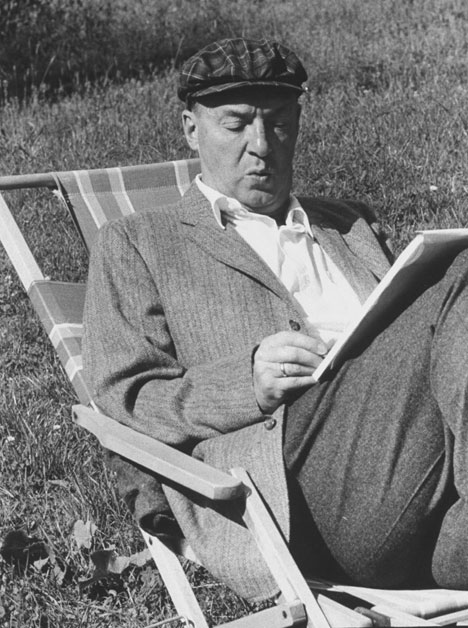 Even as an old man, far away from the beloved Russia of his youth, the eccentric literary genius would proclaim that he had harbored dreams of exile from an early age.

A New York Times journalist interviewed Vladimir Nabokov in Montreux, in the hotel he had lived in with his wife Vera since they had left the United States, where they had spent more than 20 years of their lives. At the time, the writer was 72 years old. The novel Lolita (1955) had brought him success, but had also closed the doors on the Nobel Prize to him.

In Switzerland, Nabokov was reunited with the paradise of his Russian infancy. The lakes, the mountains, his adored Vera (his loyal collaborator) and his son Dmitri, who at the time lived in Milan, were all he needed to devote himself to his two passions: writing and collecting butterflies.

In that interview, journalist Aldem Whitman asked Nabokov if his life at all resembled what he had imagined it would be like when he was young. “My life thus far has surpassed splendidly the ambitions of boyhood and youth,” the writer replied, adding: “In the first decade of our dwindling century, during trips with my family to southern Europe, I imagined in bedtime reveries what it would be like to become an exile who longed for a remote, sad and unquenchable Russia under the eucalipti of exotic resorts. Lenin and his police nicely arranged the realization of that fantasy.”

“At the age of 12, my fondest dream was a visit to the Karakorum range in search of butterflies. Twenty-five years later, I successfully sent myself, in the part of my hero's father (see my novel The Gift), to explore, net in hand, the mountains of Central Asia. At 15, I visualized myself as a world-famous author of 70 with a mane of wavy white hair. Today I am practically bald.”

Nabokov would preserve the happiness that he experienced in his early childhood like a treasure, projecting it over and again in the mirror of his novels. In them we find the simple delights of life that his mother, Elena Ivanovna, taught him to appreciate, as if she feared that this Eden would vanish someday, as it ultimately did.

The many faces of Nabokov's Lolita

At the age of 20, Vladimir left Russia and said goodbye to his first love. The hurried exile and the loss of his beloved one became both his wound and the leitmotif of his works. In 1919, part of the Nabokov family settled in Berlin, while Vladimir and his brother Sergei travelled to England to study Russian and French literature at Cambridge University.

Their father, Vladimir Dmitrievich Nabokov, was an intellectual and one of the founders of the Constitutional Democratic Party, which stood against the 1917 Revolution. In exile in Berlin, Nabokov Sr. ran a liberal newspaper, Rul (The Rudder), in which his son published his poems and short stories. First in Berlin, and later in Paris, Nabokov Jr. produced eight novels that were written in Russian and set in the German city; Mary, published in 1926, was the only exception. Vladimir wrote constantly and earned a bit of money as a film extra, a ball boy and the author of a Russian grammar book whose first exercise contained the following sentence: “Madame, the doctor has arrived. Here is a banana.”

Vladimir Nabokov, the oldest of five children, was born into an upper-class St. Petersburg family the same day as Shakespeare, April 23rd, in 1899. He was brought up by foreign governesses, who over time were replaced by male tutors. The Nabokovs enjoyed summers in Vyra, a few miles from Petersburg, in a large house with numerous bathrooms. Vladimir recounts in his autobiographical memoir Speak, Memory that he wrote poems while holed up in one of the bathrooms. Those poems were read by the poetess Zinaida Gippius, who through Nabokov’s father sent him a terrifying message: “Tell your son that he will never be a writer.”

Falls were spent on the beaches of the Adriatic Sea, or in Nice or Biarritz, and winters at the family home, at 47, Bolshaya Morskaya Street in St. Petersburg. As the firstborn, Vladimir was a spoiled child. His father taught him fencing, tennis and boxing. Vladimir also inherited his father’s interest in chess, and above all, his love of literature and Lepidoptera. While still in short pants, Vladimir had already learned all the nouns and verbs in three languages (English, Russian and French), words that as a writer he would play with in his style to construct ambitious “perfect lies” that still bewitch the reader who falls under his spell.

His individualistic character was incompatible with any group, even during his school years. The child that wrote compositions sprinkled with “foreign words” and did not take part in games could not have charmed either his classmates or his teachers at the elite Tenishev School. At the age of 11, Vladimir Nabokov realized it would be difficult for him to “fit in in any setting,” but instead of dramatizing it, he converted his isolation into a positive value.

As an adult, he continued to be a “gentle loner” with hardly any contact with other writers. We will never know how much truth was there behind that pride of his that made journalists suffer. He demanded them to send interview questions to him in writing. He would reply to the questions in kind, would dictate how the final texts must appear and oblige his interviewers to receive authorization prior to publishing them. Vivian Darkbloom (that was his anagram) promised that he didn’t give a damn about criticism, but his wrath could be heard from the top of Swiss mountains when some critic did not “correctly” interpret his work.

Though reserved and even reluctant with journalists, Nabokov was very eloquent and outspoken during his lectures on literature. In the United States, university students at Wellesley and Cornell listened in amazement and delight to Professor Nabokov’s sharp remarks about the works of Dostoevsky, Thomas Mann, Hemingway, Faulkner and Pasternak. To be fair, the author of Ada and Pale Fire had several saints on his altar: Tolstoy, Chekov, Bely, Proust, Joyce and Kafka.

There is a lot to say about this extraordinary character, who reached the age of 78 with short pants still on, had memorized entire dialogues from the Marx Brothers, despised Freud, didn’t drive, and wrote standing up and with a pencil. There is a lot more to say about someone who enjoyed his aperitif with a glass of Tío Pepe (never vodka) and some almonds. In the afternoons, he would play chess and Russian Scrabble with Vera. His biggest dilemma at eleven o’clock at night was whether or not to take a sleeping pill.

There are volumes written about that big boy who spoke with the insecurity of a child, but I invite you to read his novels and laugh with him. Nabokov emphasized laughter over pain. He wanted his readers to exercise the muscles of laughter, the laughter that is born in the belly and supplies oxygen to the brain. And although sadness cannot be avoided, for Vladimir Nabokov, life was “a slice of fresh bread with butter and mountain honey” that had to be enjoyed. He did that until the end, July 2nd, 1977.