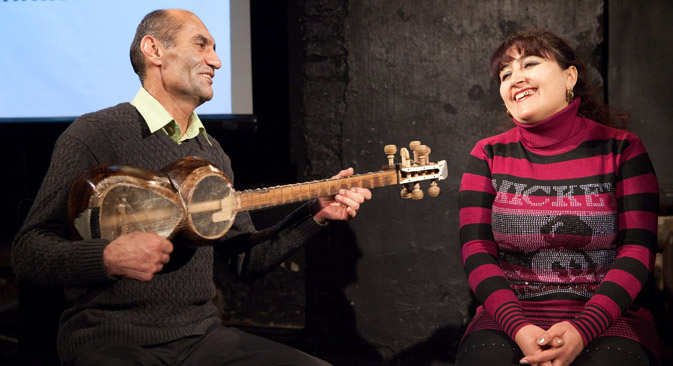 Actors (janitors, builders, and workers from Tajikistan and Uzbekistan) have received a special award at the country’s most prestigious theater festival, the Golden Mask, for the play “Akyn-Opera” held at Moscow’s Teatr.doc. The play’s director, Vsevolod Lisovsky, talks about what the migrant workers do on stage, and how they do it.

Vsevolod, how did the janitors wind up on stage?

I had a rough idea, and then started searching for characters. I tried to go to Yaroslavka, where migrants stand around looking for work. I told them that there was work in a theater and they should talk about themselves.

I stood with a sign in the snow, frozen, but there was no sense in it: One came up but got spooked and ran away. It was more effective to publish an announcement in the special resources for migrants: They probably use the internet. All of my actors had opened accounts on Facebook. For them, internet technology is not entertainment but a link to their homeland.

My interference in the play is minimal: I just help bring the stories to the audience. I don’t change a single word. They sometimes ask how to pronounce something correctly in Russian. I tell them, but I propose that they not be shy and just speak as they speak. People simply go on stage, sit on a chair and tell life stories, play music, and sing songs…

And what are the stories?

You know, they are different. For example, the Uzbek boy Shakhier talks about the tough time he had with his classmates or how his knowledge of Russian literature helped him score a moral victory over evil registrars in a polyclinic.

His problems are not so much national but adolescent: He is new in school; he is not very confident in the language; he doesn’t understand some of the realities. Naturally, children bully him. And on stage he talks about how he must pull it together and handle these problems. At the polyclinic, they wanted to send him on to hell, but in the end, he got what he wanted anyway. I think it is a very life-affirming story.

What kind of problems do adults have?

Adults can dance about a mid-life crisis: When a person is 45, he is not very happy and can dance about it. An  adult may talk about how hard it is to have three wives or how when sitting in an Uzbek prison, he began to see the beasts that crouch inside of everyone.

He may talk in poems about the time when as a child he heard about Valentina Tereshkova’s space flight and decided that Tereshkova was his Russian neighbor Auntie Valya and wanted to ask her to show him the rocket but couldn’t because he didn’t know Russian.

Another tells the story of the first time he came to Russia. He talks and sings a comparative analysis of our various construction projects. These are just basic things.

Does the composition of authors and the cast of performers often change?

The premier was in September 2012 and the original cast included Pokiza Kurbonasenova, Adzham Chakoboyev, and Abdulmamad Bekmamadov. We perform about once a month. Right now there isn’t a permanent cast. So, the program changes at each performance. It’s a pity that Aman left with his excellent Karakalpak dance about a midlife crisis.

There was Anvar with his wonderful polygamist confession – he had three wives – but he vanished. Usually there are three to five people in each play and they tell different stories each time. Thus, there’s no chance of ending up at the same play twice.

We’d like to do a regular program, but it won’t work out. Someone is always unable to make it; someone has left; someone just disappears. Two actors have disappeared, one under very mysterious circumstances.

Adzham and Abdul are out of work at the moment. At the Golden Mask awards ceremony, Abdul offered to repair things cheaply for members of the jury and the public. I really hope that our small and medium-sized businesses will be interested in the unique opportunity to employ laureates of the Golden Mask national theater award.

They can be janitors or plumbers; they can do finishing-up work; they can do different things – they’re jacks of all trades. Nobody has anyone like that.

Is there a material incentive for performing in the theater?

The theater doesn’t pay them. The actors split the revenues from the tickets, but the money, quite frankly, is not outrageous. Alexander Petlura gave them suits so they could attend the Golden Mask ceremony at the Bolshoi Theater. If something is needed, we go begging and searching for it...

Are there many migrants in the audience?

Not at all. The funny thing is that people appear on stage for two years and never invite their relatives or friends even once… because all this is separate from their fundamental life.

“He called his wife and boasted that he won the ‘Mask’?” “What for!” Pokiza’s husband doesn’t let her come to the play if she doesn’t have pilaf and tea prepared. These are two nonintersecting realities.

Maybe they need different stories on the stage?

“Akyn-Opera” is a play about migrants with migrants in it, but it isn’t orientated towards migrants. In the near future our group will launch the project “Theater for Migrants.”

We will go with a group of actors from Teatr.doc to places where migrants gather and give short performances. We will touch on sore points and topics that are important and interesting to them.