Fish for a king, fish for a pauper 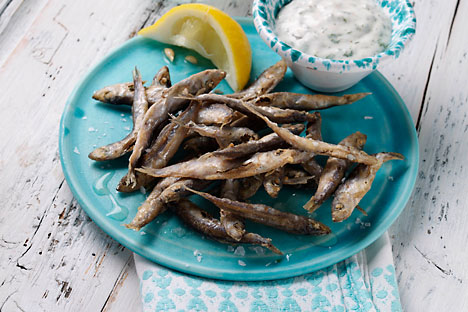 Baltic smelt is the best with lemon and bread. Source: Lori / Legion Media

Smelt and vendace have a special cultural significance for the city of St. Petersburg. One of these fish, both of which inhabit the largest freshwater lake in Europe, was considered to be food for commoners, while the other was served at the tsar’s table.

Lake Ladoga, the largest freshwater reservoir in Europe, has always provided St. Petersburg with the finest freshwater delicacies. Two of the species of fish found in the lake have a special cultural significance for the city – the smelt and the vendace.

The vendace, the smallest member of the cisco family, was served at the tsar’s table during coronation banquets, while smelt was traditionally considered to be the food of St. Petersburg’s commoners.

Five facts about the Russian karavai

While vendace is difficult to come by, smelt – an exquisite greenish fish no more than 15 centimeters in length – can be found all over food counters and restaurants in St. Petersburg during the spring fishing season in April.

Petersburg housewives have a quick recipe for cooking smelt. They add a handful of flour to a plastic bag with fresh (always very fresh) fish, and then throw the smelt on a heated pan with sunflower oil and add salt.

The total preparation time is about five minutes. No gutting, no cleaning, just lemon and pepper to taste. A nice glass of Chablis accentuates the fresh, slightly nutty flavor of the delicate fish, but it can be served with beer as well.

Cooks from the Russian northwest even compose poems about their favorite staple fish, singing the praises of Lake Ladoga and describing the unusual, elusive odor of the fish, which at times can resemble cucumber or fresh watermelon.

The pinkish vendace, which is considered to be an aristocratic delicacy due to its tenderness, has to be cleaned, though not necessarily gutted. The vendace is not as simple to get on the table as smelt.

This fish is very sensitive to environmental conditions, and Lake Ladoga’s waters (along with most Baltic Sea basin waters) are not the best. Smelt catches also decrease every year, although they are still significant at an industrial level.

But do not despair. If you happen to make it to Lake Valdai in the Novgorod Region – home to Vladimir Putin’s favorite rural residence - in the spring, you still have a shot at tasting the rare fish. The lake’s ecology is well-preserved, and there is plenty of vendace to be found in the waters.