Eurovision’s bearded lady gets conservative Russians hot under the collar 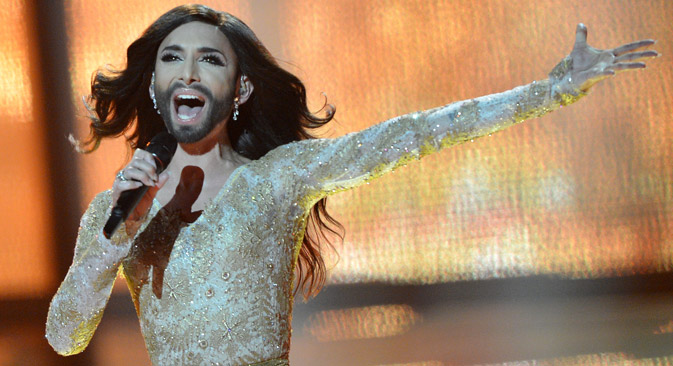 Eurovision winner Conchita Wurst attracted much attention not only for her looksm but also for her singing. Source: Vladimir Astapkovitsch / RIA Novosti

Transvestite Conchita Wurst's triumph for Austria in the Eurovision Song Contest whipped up a storm of controversy in the Russian media. Conservatives publicly condemned the bearded lady’s win and questioned European morality, but bloggers were more open-minded in their reaction to Wurst’s victory.

The victory by bearded Austrian transvestite Conchita Wurstin last week’s Eurovision Song Contest, while hailed in by many Western Europe as a triumph for freedom of expression and tolerance, was widely derided by the Russian media.

Some politicians and officials condemned the bearded lady's win, and a number of programs defending so-called “traditional values” from people like her were broadcast on the main Russian TV channels.

The participants of a talk show on the Rossiya 1 TV channel also expressed their opposition, with host Boris Korchevnikov calling Wurst's performance a requiem for the European Union and traditional values. In his opinion, "Europe in general has lost its senses," and this character, "neither male nor female," burning in the fires of hell, perfectly portrays the state of today's European Union.

Firebrand leader of the Liberal Democratic Party of Russia (LDPR) Vladimir Zhirinovsky even went so far as to claim that "we liberated Austria for nothing," and added: "Europe has diarrhea with blood and foam."

The Russian blogosphere, however, received Conchita Wurst's victory with a surprising lack of judgment.

Open minds in the blogosphere

"I don't see anything unusual. This is a show. I liked the winner, her voice and song were great!" wrote blogger sen semilia on livejournal.com, and this opinion was shared by many. "Oh my god, what news this is – a man in a dress on stage. Judging by the reaction, you'd think that nobody had ever seen this before," wrote mona cenia.

It is not entirely clear what exactly officials are criticizing - the sexual orientation of the singer, or the image of a woman with a beard. If orientation is the issue, then world-famous Russia pop duo Tatu already exploited the lesbian image fifteen years ago.

And the issue is a woman with a beard, Russian circuses were already showing them in the century before last, and in Portugal there is even a full Catholic Great Martyress with a beard.

Furthermore, the role of the transvestite is in high demand on our stage. Verka Serdyuchka, who is extremely popular in Russia, is the cross-dressing artist Andrei Danilko, who represented Ukraine in Eurovision 2007 and got second place there, among other things.

And in the popular Russian comedy Election Day, the bearded frontman of the group Umaturman sang a song called You're a Transvestite, Masha in women's clothing 10 years ago - and there was nothing. No one resorted to loud political statements.

The show must go on

Most Russian bloggers perceive the bearded lady on the stage as a show, and are posting Queen videos in which Freddy Mercury sings in a dress.

"This is a show, and shows – particularly with provocative images – always have been shocking in pop music, and suddenly they have decided that this is some violation," Irina Krashennikova wrote on her blog.

PHOTO OF THE DAY: The opening ceremony of Eurovision 2014

"The people who are astonished and are going into hysterics over Conchita Wurst's win are hiding behind a concern for children's psyches. These types of people are either hypocrites, or they do not notice the obvious," wrote blogger Natalya Kramushenko.

In addition, Kramushenko recalled that there are many alcoholics in the country disfiguring the psyches of children, and that no one is outraged by their behavior, but yet when it comes to some foreign singer who nobody will remember in six months’ time, their outrage has no limit.

This view is shared by many others. Den04 wrote: "Murders, rape, and the promotion of drugs are shown on TV and in movies every day. And children even play violent video games. So why aren't parents outraged about this? But a talented artist sings at Eurovision, and hysterics begin..."

The user also wrote: "I don't understand this stupid society. Bodybuilders also have beards and mustaches, but if you were to tell them that they were immoral, you'd wake up in the hospital with a concussion and could discuss "morals" with your neighbors in the ward."

But no particular frenzy broke out in the blogosphere. Many bloggers simply do not watch Eurovision, as they feel that it is too shallow, and many were just left cold by the issue of whiskers on a woman's face. There were also those who condemned the Austrian singer, but with somewhat hackneyed, repeated clichés about the protection of traditional values and depraved Europe.

But if it were not for the loud statements of a few newsmakers who evidently decided to trample on the outcome of the European show, few would have noticed the hair on Conchita Wurst's face.