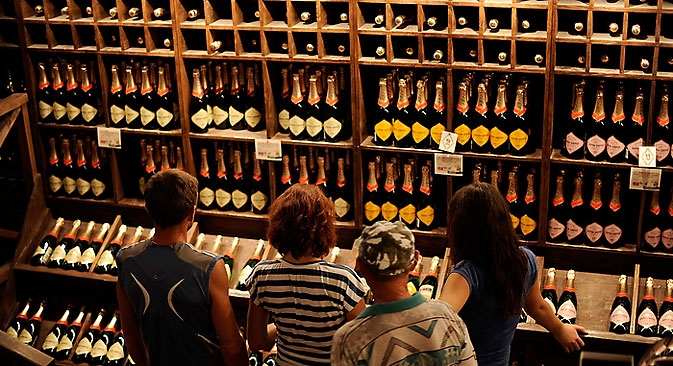 Abrau Durso is made in the champagne style and it's a true taste of imperial Russia. Source: Mikhail Mordasov

Winemaker Igristy Vina brings a little Italian sparkle to the Russian market with the purchase of Contarini.

Try to imagine the most likely buyer for a large, established prosecco producer in Italy; chances are a sparkling wine house in southern Russia might not be the very first to spring to mind. And why should it? Given that the vast majority of national output is still cheap, bulk-production offerings, Russia's nascent quality-orientated wine industry has understandably tended to focus on improving its infrastructure and wines, rather than expanding into new territories.

However, as the industry continues to grow in confidence, its more adventurous figureheads are realising that they cannot rely on domestic production and the Russian market alone. Consequently, in an unprecedented move, Russian sparkling wine producer Igristy Vina sealed a deal to purchase the Italian brand Contarini in April of this year, the first such acquisition of a prosecco maker by a Russian firm.

Igristy’s timing could not be better: in 2013, more than 307 million bottles of prosecco were sold worldwide, with sales continuing to grow as the classic Italian wine continues to cement its status as the affordable sparkler of choice.

Igristy reportedly paid €8m (£6.6m) for the property, in addition to inheriting debts of more than €20m. But considering the staggering popularity of this “Champagne lite” party-starter, this may be a modest price to pay when weighed against the potential volumes to be shifted worldwide.

Contarini currently exports around 500,000 bottles of prosecco to Russia annually; once the dust has settled, Igristy Vina plans to increase this supply to 1m bottles, as well as using the Italian premises for their own brands. With western demand for Russian domestic wine virtually non-existent, it looks like a shrewd move ­‑ if not a safe bet ‑ to invest in such a worldwide phenomenon as prosecco.

Russia's oldest sparkling wine house, Abrau-Durso, started the ball rolling back in 2010, with the purchase of Château D'Avize, a derelict property in France’s Champagne region.“As we continue to grow and learn as an industry, it was only natural that we would start to look outward,”says Abrau chairman Pavel Titov. “A diversified portfolio is a safer portfolio.”

Mr Titov now produces an organic brand of champagne, Foliage, which has already found success in the Russian market and is poised for a wider distribution this year. Abrau is also planning to expand output to more than 30m bottles over the next couple of years — a fact made all the more significant when you consider that no one associated Russia with quality winemaking until the early part of 21st century; before that it would have been simply unthinkable for a Russian winemaker to invest in an established region.

By throwing off the lingering psychological shackles of Soviet socialism and investing serious sums, brands such Abrau Durso, Igristy Vina and Château Le Grand Vostock have shown remarkable improvements in quality over recent years. Their priorities now seem to be expansion of production and investment in new enterprises — both classic indications that the industry is in good health.

Whether their focus will now be on building export markets for existing Russian wines (only Abrau-Durso currently exports to the UK) or on increasing their holdings in global brands remains to be seen. One thing, however, is certain: the wine world will be seeing a lot more roubles and Russian bottles in the years ahead.