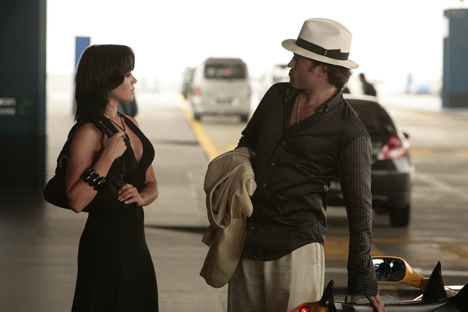 In Russia, changing attitudes to foreigners have always been reflected in the representation of characters from abroad in Soviet and Russian film. RBTH attempts to trace the changes fictional foreigners undergo through the decades in USSR and post-USSR cinema.

In Russia, foreigners have always been treated controversially: either as cunning and powerful enemies or as civilized and rich friends from abroad. This attitude was reflected in the characterization of foreigners in Soviet and Russian film. RBTH attempts to trace the changes fictional foreigners undergo through the decades in USSR and post-USSR cinema.

In the 1930s Soviet movies, life in the USSR was depicted as free and joyous, in contrast to the grim reality experienced by capitalist countries. But ordinary foreigners in Soviet films of the time were not all pictured as enemies or monsters. Often they were honest, kind-hearted men and women struggling with the capitalist oppressive system.

Movies like The Big Game (1934) and Black Skin (1931) deal with American factory workers, underpaid or even fired in the U.S., and finding new life in Soviet Russia. The Circus (1936) is a musical comedy in Hollywood’s best traditions, but the film also deals with racism.

The film’s main character, Marion Dixon, played by the Soviet star Lyubov Orlova, is an American circus artist who has an interracial child and is blackmailed by her manager. Only in the Soviet Union does she find acceptance and a new love.

Flight to the Moon from The Movie Circus. Source: YouTube

The times changed after the beginning of the Cold War, when the Soviet state began treating foreigners as enemies. The late 1940s saw the appearance of big-budget propaganda films about ruthless U.S. politicians and militarists trying to disrupt a fragile peace.

One of the first anti-U.S. films is Encounter at the Elbe (1949). In this movie Lyubov Orlova again plays an American, only this time she is a glamorous, cigarette-smoking spy.

In the following years foreigners in movies were either Nazis, cold-hearted, cruel and cynical (in war films), or cunning spies, trying to steal military secrets or involved in sabotage (political and spy thrillers).

The Dead Season (1968) manages to combine both types. The villain of the film is an ex-Nazi professor who invents a gas that turns people into obedient slaves, then seeks to sell the gas to an unnamed Western intelligence agency. The antagonist of The Dead Season is so inhuman and grandiose that he could compete on equal terms with any U.S. superhero comic villain of the time.

On the other hand, right after the war, the image of discreet and hard-working foreigners was still in use. The Russian Question (1947) tells the story of an honest American journalist who visits the USSR and writes a book debunking the myths of poverty and totalitarianism in Soviet Russia. The book then sparks a scandal in America that eventually costs the hero his career and even his marriage.

By the 1970s, foreigners began to appear regularly in the USSR – on business or other trips. No longer a propaganda myth, they were now real people who could be seen in the street. So it became apparent how different they were in terms of culture, habits and behavior.

This “alienation” was reflected in cinema. Foreign characters became eccentric, even otherworldly. They could be intelligent and a little goofy, like Professor Bill Hansen from Autumn Marathon (1979). Hansen is completely clueless about the Soviet way of life, but very curious, which is a frequent source of comic relief.

Otherwise foreigners could be flamboyant, free-spirited and assertive, like the Italian cast of the big budget action-adventure film The Unbelievable Adventures of Italians in Russia (1973). The protagonists dress in unfamiliar clothes, behave strangely and loudly, and basically charm everyone they meet. In any case, at some point during the 1970s the negative portrayal of foreigners metamorphosed into a much more positive one.

By the late 1980s, official USSR ideology was nothing more than an empty shell. Living standards were dropping, and the crime rate and corruption were on the rise. In these circumstances, Soviet people began to perceive the West as a paradise. The wheel had come full circle, and now it was the grim reality of USSR and Russia that was set against the joyful, free and wealthy life of the West.

Foreigners were now depicted as civilized, intelligent and rich people, shocked by the turmoil and savagery of Russian reality. In Window to Paris (1993), a wardrobe in a St. Petersburg communal flat opens onto the roof of a Paris apartment. Beautiful and delicate Parisian Nicole, who lives in the apartment, is lured into Petersburg so that she can’t interfere with the inhabitants of the apartment, who travel back and forth trying to make money on credulous Frenchmen. Nicole gets harassed by the locals and ends up nearly losing her mind.

There were many other films which, although they pictured the West as the land of abundance and civilization, did so while implying that foreigners have the same problems as Russians. Movies like Intergirl (1989), American Daughter (1995), and Winter Cherries 2 (1990) are centered on Russian women who marry a foreigner and move abroad – the dream of just about every Soviet girl of the 80s. But eventually, this turns out to be even harder for them than their dire existence at home - Russian characters have a hard time finding their place in the Western world, which is rich and beautiful, but lives by different social norms.

The final change occurred somewhere around the 2000s. Russia had by then recovered from a long crisis and integrated itself in the global economy. The 70-year old Soviet myth of a better life abroad has fallen apart, giving way to reality. In contemporary Russian cinema, Westerners are neither enemies nor benefactors. Basically, they are just the same, sharing the same emotions and pursuing the same goals as Russians.

In The War (2002) a Russian soldier and an American actor fight alongside each other to save the actor’s fiancée, who is being held hostage by Chechen gunmen. In the more recent action film The Apocalypse Code (2007), special agents of the FSB and CIA cooperate to eliminate a nuclear threat to the world, so giving birth to a new cinematographic myth.