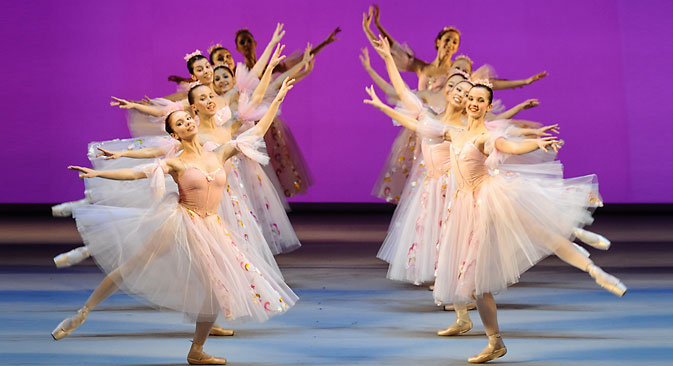 Bolshoi Ballet to go on tour in the U.S. this summer. Source: Photoshot / Vostock Photo

After a series of high-profile scandals at the Bolshoi Theater led to a change in leadership, fans of opera and ballet have been left wondering which direction the theater will now take. The Bolshoi has now announced the details of its repertoire for the 2014-2015 season, which includes five operas and three ballet premieres - and also takes a few risks.

Following a series of high-profile scandals at the Bolshoi Theater, opera and ballet aficionados have been left wondering which direction the theater will now take. Now under new leadership, the theater has announced the details of its repertoire for the 2014-2015 season, which features several artistic choices that are bound to raise eyebrows.

The operatic repertoire in the new season will include Verdi's Rigoletto, The Queen of Spades by Tchaikovsky, The Marriage of Figaro by Mozart, and Carmen by Georges Bizet, as well as a children's opera by Sergei Banevich called The Story of Kai and Gerda.

Catch a Bolshoi Ballet broadcast at the movies

In its new season, just as in the current one, the Bolshoi Theater is to continue its “Bolshoi Ballet in the Cinemas” project, in which it broadcasts performances by the famous troupe around the world. More than a thousand theaters in fifty countries are involved in the live broadcasts and reruns, which go out on Sundays. The full list of participating cities and theaters around the world can be found on this website.

One would think that five full-length opera productions is a serious undertaking for new director Urin and music director Sokhiev, who both recently were named to their positions.

But two of these operas have already been performed. Petersburg director Lev Dodin will be directing The Queen of Spades, which he also presented in 1999 in Paris. It is a well-known opera and the new production will be an updated version.

Rigoletto will be directed by Canadian director Robert Carsen, who submitted it last year it at the Festival d'Aix-en-Provence.

The directors who have been invited to stage the other performances learned their trade in drama, not opera, which is much riskier. Opera aficionados could be forgiven for worrying that these productions may be more like dramas than operas.

The Marriage of Figaro in the youth theater program will be directed by Yevgeny Pisarev. The youth program itself is worthy of special mention: It is a kind of social platform for young performers that are brought in from all across the country. The program arranges auditions and gives them a chance to prove themselves on the big stage.

Carmen will be staged by the head director of the Russian Youth Theater, Alexei Borodin, with whom Bolshoi's current director Vladimir Urin worked for seven years at the children's theater in Kirov in the 1970s.

The Story of Kai and Gerda will be staged by a young director named Dmitry Belyanushkin. It seems only natural, actually, that the children's performance would go to a young director.

Urin openly admitted that it is difficult to put together an ideal season in ten months. “Putting plans together so quickly for the new season was very difficult in such a short period of time. Yes, probably, the plans include some compromises..." he said, promising that "long-term plans will be much better."

Just three ballet premieres have been announced. There will be a world premiere of Hamlet (presumably with music from Dmitri Shostakovich's symphonies), while Mikhail Lermontov’s novelA Hero of Our Time will be set to music by Ilya Demutsky.

Broadcasts of the 239th season

Live broadcast in April 2015 (date to be confirmed)

Meanwhile the old Legend of Love, first staged at the Bolshoi in 1965 and already a classic, will be choreographed by Yury Grigorovich. Legend is set to music by Arif Melikhov and based on a drama by Turkish communist poet Nâzım Hikmet - a sure-fire formula for success. It is a tried and true, classic example of Soviet choreography.

Prokofiev's descendants, however, are very unhappy with the choreographer and it is doubtful that they would give him permission to use this composer's music for any more performances. They took offense at Poklitaru's interpretation of the ballet Cinderella, which featured the heroine dancing in a brothel.

The composer's descendants are insistent that neither their famous ancestor, nor the fairytale’s original creator Charles Perrault would have approved of the choreography.

Now the Donnellan-Poklitaru star duo have embarked on reinterpreting the work of another classic of Soviet music, Dmitri Shostakovich, and are holding negotiations with his descendants. Critics remain doubtful that they will be able to come to an agreement, but Vladimir Urin is confident that they will succeed.

The other ballet, A Hero of Our Time, is based on three chapters of the eponymous book written by the great Russian poet Mikhail Lermontov: Bela, Taman, and Princess Mary. Director Kirill Serebrennikov, artistic director of the progressive Gogol Center theater, has been invited to stage the ballet.

Serebrennikov has already made a name for himself by staging The Golden Cockerel opera by Rimsky-Korsakov at the Bolshoi in 2011. His direction caused a scandal after he remade this traditional children's fairytale as an evil adult tract set in modern times.

Both Hamlet and Hero are to some extent dark horses, because the theater is experimenting with them and the outcome is far from certain.

Unfortunately, the Bolshoi Theater has no plans to tour Russia next season. The company is an internationally promoted brand and continues to be in great demand at the world’s most prestigious theaters. Urin has given vague promises for future tours around the country, but the first priority is foreign countries, and the very first stop is the United States.

Bolshoi Ballet to go on tour in the U.S.

On June 12-13 Bolshoi's opera company will perform The Tsar's Bride conducted by Gennady Rozhdestvensky, and the Bolshoi ballet will perform Swan Lake, Don Quixote, and Spartacus in New York from July 15 to August 1.

In the fall the ballet troupe will travel to Japan, where it will be performing Swan Lake, Don Quixote, and La Bayadere in Tokyo and five other cities from November 20 to December 7.

The ballet and opera companies will be at the Hong Kong Arts Festival at the end of March 2015. They will perform The Tsar's Bride opera and Flames of Paris and Jewels ballets.

And in July 2015 they will tour Brazil with two ballets (Spartacus and one other as yet to be determined).