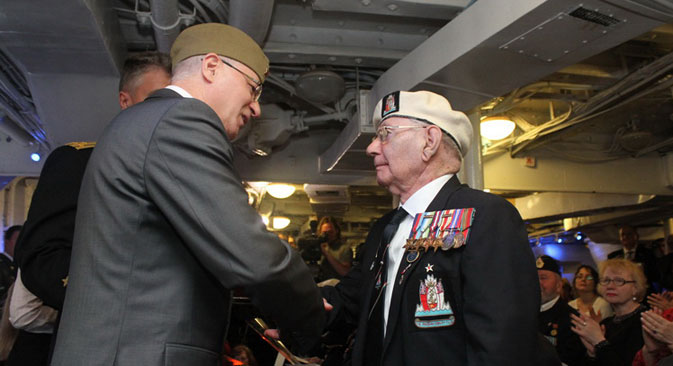 It’s been a long time coming but, on May 9, 2014, 19 British veterans who served on the Arctic Convoys finally received their prestigious Ushakov medals from a grateful Russia. The Victory Day ceremony, on former convoy escort HMS Belfast in London, marked another step in the campaign to recognise the heroism and sacrifice of British sailors who manned 78 convoys that took millions of tons of supplies and munitions to Russia from 1941 to 1945.

While convoy veterans of other nationalities received their medals years ago, the British Government proved slow to allow Russia to acknowledge the key role played by British sailors, until an agreement was reached in 2012 between Vladimir Putin and David Cameron. All surviving veterans will now be recognised with the highest Russian naval award, named after Admiral Fyodor Fyodorovich Ushakov (1745-1817), who never lost a battle – or a single ship – despite leading the fleet in 43 engagements.

The Arctic Convoys, making what Winston Churchill called “the worst journey in the world”, normally from Loch Ewe in Scotland to Murmansk or Archangel, lost 85 merchant ships and 16 warships to attacks from the German navy and air force, while suffering the onslaught of Arctic ice and huge waves.

On the eve of the presentation – made in the presence of British and Russian dignitaries by Russia’s chargé d’affaires Alexander Kramarenko – a group of British veterans plus a contingent of their Russian counterparts met and mingled in the Churchill War Rooms in Whitehall. Here, in the underground headquarters of the British war effort, event organiser Tim Lewin donated two Russian awards, an Order of the Red Banner and a Soviet Victory Medal, along with the original crest of convoy escort HMS Ashanti, to the Russian Arctic Convoy Museum.

The old soldiers and sailors then listened to speeches and watched a film of the fabled “succeed-at-all-costs” Pedestal convoy to Malta in August 1942, before informally reminiscing about their own stories of survival and remembering fallen comrades over dinner.

While their political masters may have grown increasingly estranged over recent events in Crimea and Ukraine, the warmth and camaraderie between these men stood in sharp contrast. Austin Byrne, 92, sailed in Convoy PQ 13 as a gunner on SS Induna which was torpedoed on March 30, 1942. He spent four days in a lifeboat in fearsome conditions before being rescued by a Russian ship. “A 16-year-old boy in the boat cried for his mum because he was freezing to death,” Mr Byrne recalled. “An American sailor, Russell Bennet, who was was badly burnt, never cried, never moaned.

“When we sighted land, he said, ‘Turn the ship boys so I can see it; put an oar in my hand so I can rock my body.’ He was a wonderful man. He died as well – and but for the Russians, I would be dead, too.”

Also present and still cutting a striking figure in his heavily medalled uniform was Ivan Lytkin. Now 88, the Siberian faked his birth certificate in order to fight, and served behind enemy lines in military intelligence. Today, he sees it as his duty to remind his fellow countrymen and the rest of the world of the sacrifices involved in defeating fascism. Though he never sailed in the Arctic Convoys he is particularly happy to help publicise this often-overlooked chapter of the war. Speaking through an interpreter,
Mr Lytkin’s delivery was passionate and lyrical as he recalled a time “when Mother Earth was weeping with pain”.

Central to his theme was the necessity never to forget. “Human memories are very complicated and when a single person loses his memory, it’s a tragedy for that person,” he reasoned. “But when a whole society loses its memories, there is no hope for mankind. Yet, while we are alive we will remember.”

Echoing this theme was English veteran, Charles Erswell, who served on several convoys including PQ 18, the biggest of the war and one of the most vital, following on as it did from PQ 17, which lost 24 of its 35 merchant ships to enemy action

As a gunner on HMS Milne, Mr Erswell, 90, experienced his share of horror, and remembers having to recover the name tags of the dead rescued from a sunken merchant ship. He also recalls another sinking on the same day. “It went down stern first, absolutely vertical,” he said. “There were about five or six lads climbing up the fo’c’sle as it was going down, and one managed to get to the bow. He was sat astride it, waving at us, calling out for us to help, but we couldn’t get there, it went down that quick.” 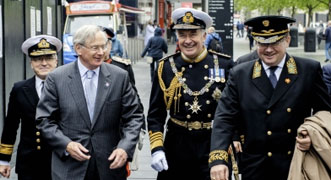 Mr Erswell is under no illusions about the sacrifice made by Russia during the Second World War. “I think that we owe the Russian people a debt which we can never repay,” he said. “I know we did our little bit in helping them with our convoys, but every man, woman and child in Russia was involved in the war. They lost millions of people.”

Although saddened by the fact that many of his friends died before they could be honoured (no Ushakovs will be awarded posthumously), Mr Erswell is adamant that he will enjoy the award fully. “Do you see these medals?” he asked, pointing to his well-decorated chest. “The Ushakov means more to me than all of these put together.”

‘It was the most memorable day of my life’

As I enjoyed a restaurant meal with my former shipmate, after we had received our Ushakov medals, a man came up to our table.

He shook our hands and said: “Thank you for what you did for my country during the war.” I replied: “My country owes the Russian people a huge debt for their sacrifice, without  which we would all be speaking German!

After he went back to his seat, we found he had paid for an extra drink for us. I went across to thank him and was introduced to his wife and two of her friends. I thought it was a really kind gesture.

We bid farewell to his party and when we asked for the bill, the waitress said there was no charge. It had been paid for by the gentleman who had just left! It was one of the highlights of our two-day trip to London.

As veterans, we’ve always been treated as VIPs by the Russian people and the award of the Ushakov medal aboard HMS Belfast on Victory Day made it the most memorable day of my life.

The programme of events, involving both British and Russian veterans, was made possible by the involvement of Russian sponsors, including St Petersburg electricity supplier Lenenergo and shipping giant Sovcomflot.