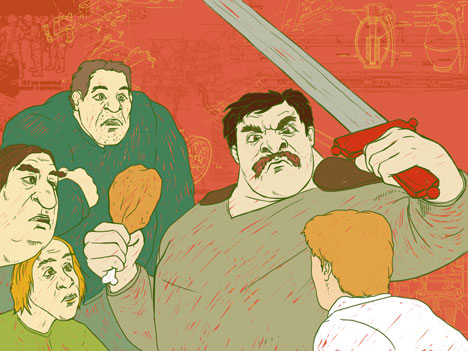 RIR presents an an excerpt from the Strugatsky Brothers' Hard To Be a God (Chicago Review Press).

On another planet, which is going through its Middle Ages, scientists from Earth live, pretending to be local aristocrats and trying to save the planet. “Hard To Be a God” by brothers Strugatsky was a groundbreaking novel for Soviet intellectuals of the 60s, but the questions it rises remain pressing to the present day. In it, the flaws of the oppressive regime were shown metaphorically. Recently, a screen version of the cult novel, filmed by late Aleksey German, came out. In this excerpt, we look upon a bar brawl in town of Arkanar, and may enjoy a vivid and at times truly Rabelaisian language of the novel in the new translation by Olena Bormashenko. “Hard To Be a God” is out in Chicago Review Press.

“Why shouldn’t we have a drink, after all?” Baron Pampa inquired irritably, grabbed Rumata’s sleeve, and hurried toward the bar through the narrow passage between the tables, scratching people’s backs with the spikes of his armor. At the bar, he snatched the capacious ladle that was being used to pour wine into cups out of the owner’s hands, silently drank it down, and declared that all was lost and the only thing left to do was make merry. Then he turned toward the owner and inquired thunderously whether this establishment boasted a place where noblemen could decently and modestly spend their time, without being annoyed by the presence of various tramps, scamps, and thieves. The owner assured him that this was just such an establishment.

“Excellent!” the baron said majestically. He tossed a few gold pieces at the owner. “Bring the best things in the house for myself and this don here, and let us be served by some respectable matron and not some cute little coquette!”

The owner conducted the dons into the clean half himself. There weren’t many people there. In the corner, a party of gray officers was sullenly making merry—four lieutenants in tight-fitting uniforms and two captains in short cloaks with the stripes of the Ministry of the Defense of the Crown. Two young aristocrats, sour-faced from general disenchantment, were sitting looking bored by a window, behind a large narrow-necked jug. Not far from them was a cluster of impecunious dons in shabby tunics and darned cloaks. They took tiny sips of beer and constantly looked around the room with thirsty eyes.

The baron collapsed on a seat at an empty table, looked askance at the gray officers, and grumbled, “Even this place has some tramps.” But then a stout woman wearing an apron brought out the first course. The baron grunted, took his dagger off his belt, and started to make merry. He silently devoured hefty chunks of roast venison, heaps of pickled clams, mountains of lobsters, tubs of salads and mayonnaise, washing it all down with waterfalls of wine, beer, or mead, or a mixture of wine, beer, and mead. The impecunious dons

started to trickle over in ones and twos, and the baron would meet them with a grand wave of the hand and a guttural growl.

He suddenly stopped eating, stared at Rumata with bulging eyes, and roared in a monstrous voice, “It’s been a long time since I’ve been in Arkanar, my noble friend! And to be honest with you, there’s something I don’t like around here.”

“What is it, Baron?” Rumata asked with interest, sucking on a chicken wing. The faces of the impecunious dons expressed deferential attention.

“Tell me, my friend!” the baron uttered, wiping his greasy hands on the hem of his cloak. “Tell me, noble dons! Since when is it the custom in the capital of His Majesty the King for the descendants of the ancient races of the empire to be unable to take a single step without bumping into all sorts of shopkeepers and butchers?”

The impecunious dons exchanged glances and started to move away. Rumata glanced into the corner where the gray officers were sitting. They had stopped drinking and were looking at the baron. “I’ll tell you what it is, noble dons,” Baron Pampa continued. “It all comes from cowardice. You tolerate them because you’re scared. Yes, you, you’re scared!” he bellowed at the nearest impecunious don. The man’s face turned pale

and he walked away with a wan smile. “Cowards!” barked the baron. His mustache stood on end.

But the impecunious dons weren’t much use. They clearly didn’t want to fight; they wanted to eat and drink.

Then the baron threw his legs over the bench, grabbed the right side of his mustache with his fist, and, glaring into the corner where the gray officers sat, declared, “But I’m not scared of a damn thing! I beat up the gray scum whenever I have the chance!”

“What’s that beer barrel wheezing about?” a gray captain with a long face inquired loudly.

The baron gave a satisfied smile. He got up from the table with a clatter and clambered onto the bench. Rumata, raising both eyebrows, started eating a second wing.

“Hear me, gray scum!” the baron bellowed as if the officers were a mile away. “Know that three days ago, I, Baron Pampa don Bau, gave your kind a good thrashing! You see, my friend,” he said to Rumata from beneath the ceiling, “we were drinking with Father Cabani at my castle. Suddenly, my groom rushes in and tells me that a band of gray soldiers is tearing up the Golden Horseshoe. That’s my inn, on my ancestral land! I give the order: ‘Saddle the horses!’—and we’re off. I swear by my spurs, there were about twenty of them there, a whole gang. They had captured some three men, then got as drunk as pigs. These shopkeepers don’t know how to drink . . . so they started walloping everyone and breaking everything. I grabbed one of them by the feet—and the fun began! I chased them all the way to Heavy Swords. There was blood—you won’t believe me, my friend—up to the knee, and the number of axes they dropped—”

Here the baron’s tale was interrupted. The long-faced captain motioned with his hand, and a heavy throwing knife clanged against the breastplate of the baron’s armor.

“About time!” said the baron. He hauled a huge two-handed sword out of its sheath.

With unexpected agility, he jumped down to the floor; the sword swept a gleaming arc through the air and cut through a ceiling beam. The baron swore. The ceiling sank, and debris rained on everyone’s heads.

Everyone was now on their feet. The impecunious dons recoiled and clung to the walls. The young aristocrats climbed onto a table for a better view. The grays, holding their blades in front of them, formed a semicircle and started taking small steps toward the baron. Only Rumata remained seated, trying to gauge which side of the baron he could stand up on without getting in the way of his sword.

The wide blade was rustling ominously as it described gleaming circles above the baron’s head. The baron was awe-inspiring. He bore an uncanny resemblance to an idling cargo helicopter.

Having surrounded him from three sides, the grays were forced to stop. One of them had carelessly stood with his back to Rumata, so Rumata bent over the table, grabbed him by the collar, flipped him onto his back into the plates with leftovers and struck him beneath the ear with the edge of his palm. The soldier closed his eyes and went still. The baron cried, “Slaughter him, noble Rumata, and I’ll finish off the rest!”

He’ll kill all of them, thought Rumata with displeasure. “Listen,” he said to the grays. “Let’s not spoil a pleasant night for each other. You can’t stand against us. Lay down your weapons and leave this place.”

“Hey!” said the baron. “I want to fight! Let them fight! Keep fighting, damn you!” As he spoke, he advanced on the grays, sword rotating faster and faster. The soldiers retreated, turning visibly pale. They had obviously never seen a cargo helicopter.

Rumata leapt over the table. “Wait, my friend,” he said. “We have absolutely no reason to quarrel with these men. You don’t like their presence here? They’ll leave.”

“We’re not leaving without our weapons,” one of the lieutenants informed them sullenly. “We’ll get in trouble. I’m on patrol.”

“What the hell, take your weapons,” Rumata gave permission. “Sheathe your blades, hands behind your heads, single file! And none of your tricks! I’ll break your bones!”

“How are we supposed to leave?” the long-faced captain said irritably. “This don is blocking the way!”

“And I’ll continue to block it!” the baron said stubbornly. The young aristocrats laughed derisively.

“All right,” Rumata said. “I’ll hold the baron, and you run by, and better hurry up—I won’t be able to hold him long! Hey, you, in the door, out of the way! Baron,” he said, hugging Pampa around his ample waist. “My friend, I think you have forgotten something important. As you know, your ancestors only used this glorious sword for noble battle, for it is said, ‘Thou shalt not bare thy blade in a tavern.’”

The baron continued rotating the sword, but his face turned pensive. “But I have no other sword,” he said uncertainly.

“You think so?” the baron still hesitated.

“You know this better than I do!”

“Yes,” said the baron. “You’re right.” He looked up at his furiously spinning wrist. “You may not believe me, my dear Rumata, but I can keep this up for three to four hours in a row—and I wouldn’t even get tired. Oh, why doesn’t she see me now!”

“I’ll tell her about it,” Rumata promised.

The baron sighed and lowered his sword. The gray soldiers ducked and rushed past him. The baron followed them with his eyes. “I wonder, I wonder . . .” he said indecisively. “Do you think I was right not to send them off with a kick to the rear?”

“You were absolutely right,” Rumata assured him.

“Well,” said the baron, sheathing his sword, “since we didn’t succeed in having a fight, we now finally have the right to have a bit of food and drink.” He dragged the still-unconscious gray lieutenant off the table by his feet and barked in a booming voice, “Hey there, kind hostess! Food and wine!”

The young aristocrats came over and politely congratulated them on the victory.

“Nonsense, nonsense,” the baron said complacently. “Six miserable thugs, cowardly like all shopkeepers. I scattered two dozen of them in the Golden Horseshoe. How lucky,” he turned to Rumata, “that I didn’t have my fighting sword that time! I may have carelessly bared it. And even though the Golden Horseshoe isn’t a tavern but only an inn—”

The hostess brought some fresh plates of meat and fresh jugs of wine. The baron rolled up his sleeves and dug in.