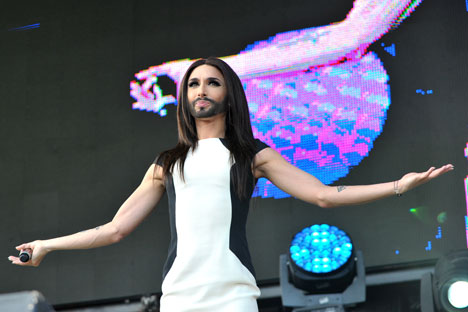 The bearded winner of Eurovision 2014, Austrian transvestite Conchita Wurst, has agreed to come to Moscow for an “after-party” competition. However, the concert is likely to be performed behind closed doors in light of the controversy surrounding the singer in Russia.

The bearded winner of Eurovision 2014, Austrian transvestite Conchita Wurst, has agreed to come to Moscow for an “after-party” competition. However, in light of the negative reaction the singer’s win garnered among political figures and representatives of conservative groups in Russia, the concert is likely to be performed in secret.

Even before the contest, the management of the Russian TV channel Muz-TV had planned to invite the winner of Eurovision to the presentation ceremonies of its annual awards, only to change its mind after the transvestite’s victory. Nevertheless, Wurst may yet come to Moscow, and at that as early as the end of May.

The invitation, which has been accepted by Wurst, was issued by promoters organizing a Eurovision “after-party” in Moscow. However, the venue for her likely appearance is a secret that is being closely guarded.

“A couple of days ago, I personally talked with Conchita, and she really wants to come here for a visit, as she considers Russia a very romantic country, and knows that she has a lot of fans here, after all, she earned third place in the Russian national vote,” said Dmitry Melnikov, who regularly organizes Eurovision parties.

“Conchita is the winner of the Eurovision contest, and like other stars, who in the respective years after their victories have visited Moscow, should also come here,” he added. “However, due to the special attitude towards Wurst in our country, there are a number of conditions on her part. The main demands are complete security and privacy.”

The singer’s visit to Moscow depends on whether she will be able to find a time slot for this party, given her tight tour schedule, which was organized long ago. 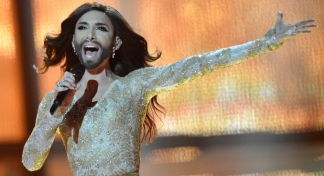 Eurovision’s bearded lady gets conservative Russians hot under the collar

For example, on May 28 and 29 she is booked to appear at two big shows in Vienna. So it is possible that Wurst will simply have no free time to come to Russia.

Meanwhile, a member of the Legislative Assembly of St. Petersburg, Vitaly Milonov, has asked the Ministry of Culture of the Russian Federation to “... prohibit the singer Thomas Neuwirth, acting under the pseudonym of Conchita Wurst, to appear in concerts in Russia.”

However, the response of the ministry’s press service, inter alia, stated “... the competence of the Ministry of Culture does not extend to banning visits to Russia by bearded women and men.”

Based on materials from Rossiyskaya Gazeta and Gazeta.ru.