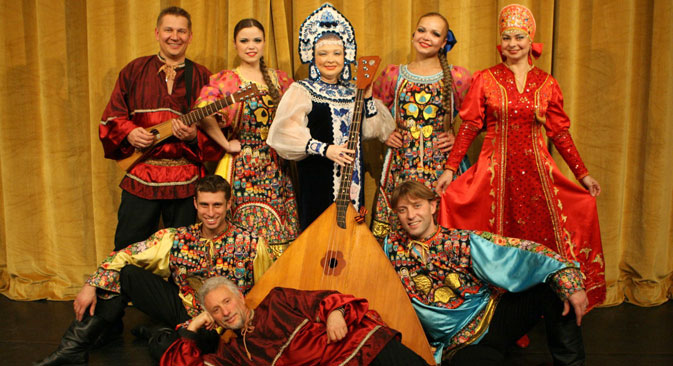 Russian folk musicians in New York work to pass their rich heritage on to a new generation.

Russian folk songs, like all folk songs, were never new and never get old. Their origins are unknown, and yet their words are familiar to everyone.

Their varying motifs reflect the wide, multi-ethnic expanse of an enormous country with a complex past: the percussive chant of a Cossak march, the undulating lullaby of a lonely village, the monotonal hymn of a Northern tribe supplicating the midnight sun.

Their evocative, poetic lyrics often personify nature to embody human emotion. They are at their most beautiful when sung in harmony, as they traditionally were, thereby allowing the singers to bond through this shared expression.

It was the communal aspect of this music that first drew Irina Zagornova, director of the New York–based Russian children’s folk group the Golden Rooster, to this genre.

“I love Russian folk because even the sad songs have this life-affirming energy. Back in the day, women used to gather together at night and sing, and that was their way of healing one another, of showing that they all had the same problems and no one was alone. And then men tilling the field would sing to pass the time and unburden their troubles and show they were all in it together, as well,” Zagornova said.

“These songs have been around for centuries, but because they’re about such universal, human issues, they’re still so relevant today.”

Zagornova graduated from the prestigious Mussorsky Conservatory of Music in St. Petersburg, and when she immigrated to New York in 1994 with her husband Leonid, a bass balalaika player, she founded the Golden Rooster in order to pass these ancestral songs on to a new generation of Russian-Americans.

The ensemble performs a wide repertoire, including themed programs that illustrate traditional celebrations like weddings and Christmas.

There’s a fair number of melancholy tunes as well, but director Mikhail Smirnov focuses mostly on the mirth: “Ninety-five percent of Russian folk songs are very depressing; the other 5 percent is the best party music, and it makes everybody have a drink.”

The third Russian folk ensemble in New York, Russian Carnival, is largely orchestral, and its music enables listeners to truly appreciate the nuanced wonders of Russian folk instruments: the balalaika, a triangular three-stringed instrument whose pure, high-pitched tone makes every melody sound plaintive; the bayan, a heavy button accordian that beautifully groans as it delivers its music; the bass balalaika, a mammoth version of its cousin that never fails to frighten onlookers both with its epic size and its sonorous reverberations; and the domra, a long-necked instrument that resembles a lute. Led by domra player Tamara Volskaya, Russian Carnival often brings an innovative twist to familiar tunes.

Despite the skill required to sing and play these tunes, Irina Zagornova said that feeling the music is just as important. “Russian folk music is meant to be felt because it’s very deeply emotional.

That’s why, when performing, you really have to connect with the audience and convey every single thing that you’re feeling. It’s kind of like being in love; if you’re going to do it right, then you can’t hold anything back.”

Folk Russian songs everyone must know

Subboteya - “Saturday evening”- an upbeat, fun song that also displays some of the characteristically cheeky humour of Russian chastushki.

Tonkaya Ryabina- “Thin Rowan-Tree”- a poignant and poetic ballad about a tree in love with an oak, whose aching longing is best expressed when sung in harmony.

Lyetat Utki- “The Ducks are Flying”- a romantic melody whose soft, dreamy tone captures the feelings of a woman waiting for her beloved to come home.

Ah, ty step shirokaya- “Oh, the wide steppe”- a staple of the male choral tradition, the deep resonance of the bass voice perfectly embodies the vast and misty steppe.

Korobeiniki – a song that tells of a meeting between a peddler and a girl, in which they haggle over the price of goods in a veiled metaphor for courtship. Outside Russia, "Korobeiniki" is widely known because of its appearance in Tetris and is often referred to as "The Tetris Song".