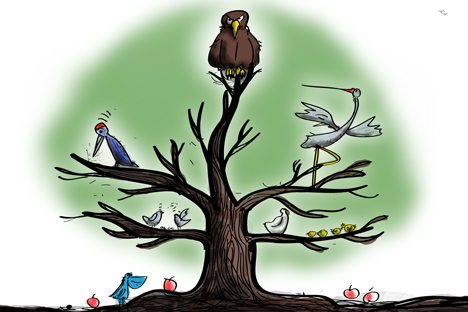 Some surnames come from ancestors, other define roots and nationality. Sometimes last names can even reveal a person's key character traits.

The times when all that a person needed was a name are long gone. Sooner or later, it was inevitable that the need to differentiate one Ivan from another would arise. The easiest thing was to specify whose son a particular Ivan was: This is how Russian surnames originally came about.

In Russia, surnames appeared comparatively recently: in the upper classes, in the 16th century; and among peasants, after serfdom was abolished, in the late 19th century. Typical Russian family names end in “-ov”, “-ev”, or “-in”.

In other words, originally Ivan Petrov meant Ivan, son of Pyotr. In generations that followed, the original last name was retained as the family name, while the name of a person's father served as a patronymic: e.g. Vasily Ivanovich Petrov is Vasily, son of Ivan from the Petrov family.

Many modern last names contain first names that have fallen from wide use, for example Makarov (Makar) or Lukin (Luka). The most typical Russian surname is considered to be Ivanov, although the most common surname in Russia is in fact Smirnov (from the wordsmirny, meaning meek): Smirnovs make up 1.8 percent of Russia's population, while Ivanovs, only 1.3 percent. Still, the three most typical Russian family names, often mentioned as a sequence, are: Ivanov, Petrov, Sidorov.

There are relatively few surnames in Russian that are based on the names of occupations: Kuznetsov (from kuznets, meaning “smith”), Rybakov (fromrybak, meaning “fisherman”), Plotnikov (from plotnik, meaning “carpenter”), Meknikov (from melnik, meaning “miller”).

But there are quite a few surnames based on names of animals: both wild (Medvedev (from medved, bear), Volkov (from volk, wolf), Sobolev (fromsobol, sable), Bobrov (from bobr, beaver) and domesticated (Kozlov (fromkozel, goat), Baranov (from baran, ram), Bykov (from byk, bull). The last name Kotov or Koshkin (from kot or koshka, cat) is quite common, while the name Sobakin (from sobaka, dog) is distinctly less so.

Interestingly, two of the most popular football presenters on Russian TV at the moment have last names formed from the names of waterfowl: Channel One's Viktor Gusev (from gus, goose) and NTV's Vasily Utkin (from utka, duck).

Two famous Russian poets from the second half of the 20th century had last names formed from the names of religious holidays: Andrei Voznesensky (from voznesenie, Ascension) and Robert Rozhdestvensky (from rozhdestvo, Christmas).

The ending "-sky" is a form of answering the question: “Whose?” or “Where from?” It is more common in western parts of Russia and, most probably, came from Polish.

The endings of surnames are a key not only to a person's nationality but also to their gender. Most Russian surnames change their ending in the feminine: usually the letter "-a" is added at the end (Ivanova, Sorokina), or "-sky" changes into "-skaya" (Moskovskaya).

However, last names ending in "-ich" and "-ko" are gender-neutral, with the female version not changing its form even when the name is declined (names ending in "-ko", which are particularly common in Ukraine, remain unchanged in all cases, irrespective of whether the person is male or female).

Public figures (for example, politicians or writers) often replace their family names with pseudonyms. Vladimir Ulyanov, who before the revolution signed some of his works as Lenin (according to one theory, after the Siberian river Lena) remained in history as Vladimir Lenin.

Proletarian writer Alexei Peshkov had both his first and last names changed: in literature, he is known as Maxim Gorky (meaning maksimalno gorky, or “as bitter as it gets”). In the 1920-30s, as part of a campaign to obliterate the past, many cities in the Soviet Union were renamed and some of the pseudonyms ended on the map of the country: Perm was renamed into Molotov; while Nizhny Novrogod became Gorky (the original names have now been restored).

Many writers often give their characters names suggesting particular traits or personality types by way of giving readers an insight into what kind of people these characters are. For example, the main character in the classic Russian 18th century play The Minor by Denis Fonvizin is called Prostakov (from prostak, simpleton). Or one of the less pleasant characters in another Russian classic, the 19th century play Woe from Wit by Alexander Griboyedov, is called Molchalin (from the verbmolchat, to be silent).

In the 1920s, in his play Heart of a Dog, Mikhail Bulgakov named one of the least sympathetic characters Klim Chugunkin (from chugun, cast iron) - which must have caught Stalin's eye, as the play was banned. Tell-tale names happen in real life too: One of the best Soviet fencers had the last name Krovopuskov (from puskat krov, or “to let blood”).