'Leviathan’ wins award at Cannes, and accolades from critics 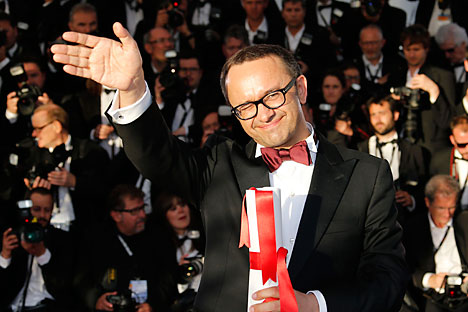 Russian director Andrei Zvyaginstev's Leviathan became the bombshell of the penultimate day of the Cannes competition, prompting some to describe it as its main sensation. "A new masterpiece from Russia," said British newspaper The Guardian.

"Will Leviathan win the Palme d’Or?" wondered Variety magazine. Zvyagintsev, considered a loyal disciple of Soviet great Andrei Tarkovsky, has created a sweeping and powerful film, rich in texture and overflowing with emotion.

The story it tells takes place on the shores of the Barents Sea, but it could have happened in any country in which the interests of an individual run counter to the interests of the state and the outcome is clear in advance.

A shameless mayor sets his eyes on the house where Nikolai lives with his wife and son, and wants to buy the property almost for nothing, basically seize it from the family.

The mayor, who looks and behaves like a crime boss, has everything under control, from the police to the courts; and knows how to suppress anybody who dares to oppose him.

A domestic drama with some comic elements turns into a tragedy that is reminiscent of some of the real-life stories you can read in a newspaper. A private tale becomes a diagnosis for the whole society, and then a forecast for the future.

The Cannes audience were confused: Nobody expected Zvyagintsev to come up with such a radical statement. His film touches on all the sore spots of modern Russia: corruption, which has become unassailable; an ordinary man's helplessness against a state official; the one-hand-washes-the-other pact between co-conspirators in the criminal state business; and the church that is ready to sanctify anything that brings money.

The diagnosis is convincing and recognizable down to every little nuance. The details are exaggerated, like for instance, the characters' non-stop drinking. Alcohol in these amounts would down an elephant, but they seem to be coping with it fine, and the audience laughed when a completely drunk traffic policeman gets behind the wheel of his car, saying: "I'll be fine, after all, I am the traffic police!" Comic relief helps to ease the inevitably depressing aftertaste.

Filming was done mostly on location, with the shells of houses, churches and ships as they are in real life. The only part made in a studio was the skeleton of the whale washed up onshore, a metaphor for a life that is expiring in the absence of oxygen.

The day after the screening, reviews were ecstatic. "Leviathan is hunting bigger game. It is a movie with real grandeur," said The Guardian.

The reviewer for the Screen magazine admired the film's visuals: "The northern Russia landscapes, all bathed in a chilly blue light that seem to freeze souls are the backdrop, and Philip Glass’s mighty waves of sound leave no doubt that an unusual experience is about to unfold on the screen. As it indeed does."

Will the film be released in Russia?

The hall for the Leviathan news conference was packed, and the cast and crew were met with applause. One of the questions that kept coming up was whether the film will be released in Russia.

While acknowledging that the film’s subject was controversial, the director was at pains to point out that it was a universal theme: “It is about a human's lot, and not only in Russia: Clashes between an individual and the state to this or that extent happen in all parts of the world.”

Zvyagintsev also defended the use of swear words in Leviathan, and denied that the film had overused coarse language. “Trust me, every single word there has been thought through and weighed very carefully. The way people speak, like they do in real life, this is what creates the atmosphere,” he said.

“Language cannot be castrated, any bans or restrictions are out of place here. There is after all a prior agreement with the audience and the poster contains a warning that there is offensive language in the film. Those who want to avoid it will not go to see the movie."

"The film was created with support from the Culture Ministry and the Russian Film Fund," added the film's producer, Alexander Rodnyansky.

"We did not set ourselves the goal of having a conflict with the authorities,” Zvyagintsev continued. “We already have another film idea and we shall launch it into production, I see no obstacles there.

“The world is diverse and should be looked at from different angles, all flowers should be allowed to grow in it. I hope the authorities realize this. And I firmly intend to live in my country and continue to make movies," the director said, to applause from the audience.