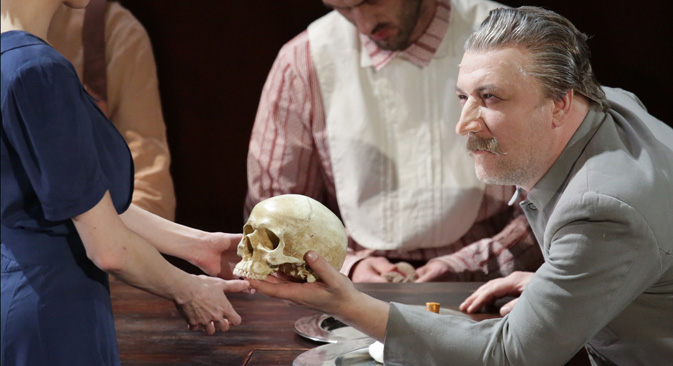 "Mainstream Moscow theater avoided politics like the plague, up until Konstantin Bogomolov began doing his shows."

These were the words of John Freedman, a Moscow-based theater critic, who recently spoke to RBTH about the growing revival in political theater in Russia - of which Bogomolov is one of the principal avatars.

The controversial theater director's kitschy and extravagant production based on Fyodor Dostoyevsky's "Karamazov Brothers," a harsh satire of contemporary Russian life, running the gamut from politics to religion, sparked controversy last fall and led to a conflict with the management of the Moscow Arts Theater, which hosted the performance.

Russian politicians take to the stage

According to Bogomolov, the theater tried to censor the production, to which he reacted by resigning from the theater.

Bogomolov used the performances he staged to express his thoughts on important political issues to a mass audience. If not for the director’s publicity and skill, the people "might not have been interested or willing to listen to some of these things, to watch them,” Freedman said.

However, the work of Bogomolov and his contemporaries with similar concerns represents only the latest wave in a long tradition of theatrical productions with political subtexts in Russia.

Roots of the phenomenon

Official productions glorified the leaders of the 1917 Bolshevik Revolution and life under the socialist system in plays, while in the 1970s and 1980s dissident-minded directors Yuri Lyubimov and Mark Zakharov at the Taganka and Lenkom theaters made cautious steps towards discussing political and social issues in their productions, operating within the confines allowed by the censors.

The era produced classics such as Lyubimov’s 1971 production of Hamlet at the Taganka, with the legendary Soviet singer Vladimir Vysotsky in the lead role, and Zakharov’s staging of Mikhail Shatrov’s Dictatorship of Conscience at the Lenkom in 1986.

Following a period of many years in which everyone seemed to be tired of everything political after the collapse of the USSR, Kirill Serebrennikov's 2004 adaptation of Les ("Forest"), a classical 19th-century play staged at the Moscow Arts Theater, was viewed by many as a precursor of a new era of political theater in Russia.

At the end of the performance, the actors playing the two main characters entered the stage made up as pop diva Alla Pugacheva and President Vladimir Putin. Serebrennikov's rendition of the play also made comments on a range of current issues, from nostalgia for the Soviet era to the increasing prevalence of lowbrow culture.

Two years before, a new project called Teatr.doc was formed in Moscow by playwrights Mikhail Ugarov, Yelena Gremina and Alexander Rodionov. Teatr.doc went on to become the most remarkable political theater, operating at the intersection of the documentary and experimental genres. The theater building itself is relatively small and seats only up to 100 guests.

"Teatr.doc is the granddaddy of political theater in Moscow," Freedman said, adding that it is "definitely the most active, the most innovative and the most searching in terms of making a political statement." He added that in its semi-theatrical performances Teatr.doc is "using theater to bring awareness to political issues."

Among Teatr.doc's best known productions are Ugarov's Chas Vosemnadsat ("One Hour and 18 Minutes"), centered on the late Sergei Magnitsky, formerly an auditor for The Hermitage Capital investment advisory firm, who died in custody after exposing a massive fraud carried out by state officials, and Maxim Kurochkin's Dvoye v Tvoem Dome ("Two in Your House") about Vladimir Neklyayev, a Belarusian presidential candidate who lost in the 2010 election and was kept under house arrest for several years after that.

Another famous political performance at Teatr.doc was BerlusPutin, based on Italian playwright Dario Fo's The Two-Headed Anomaly about Silvio Berlusconi and Putin and heavily adapted for the Russian audience by director Varvara Faer.

Other Russian directors take a more oblique approach to political themes in their productions. Vladimir Ageyev's staging of Natalya Moshina's Zhara ("Heat") at the theater Praktika is focused on the story of fictional terrorists who seize the office of a large company and make political demands.

Meanwhile, veteran director Vladimir Mirzoyev is well-known for his politically-charged productions, including his rendition of Harold Pinter's The Homecoming at the Mayakovsky Theater, in which the main character resembles Stalin.

However, when it comes to politics, Mirzoyev is more interested in “its archetypes and mythological foundations rather than its current, superficial side," as he put it himself. It has been also made public that Mirzoyev is planning on staging a play based on Mikhail Khodorkovsky’s biography.

At the other end of the political theater spectrum is Sergei Kurginyan, who has been running an experimental theater center since the mid-1980s and is known for his conservative and pro-government views.

Kurginyan shows that, contrary to stereotypes, political theater can be not only protest and leftist, but also conservative and loyal to the powers that be.

Read more: Sailing theater to embark on Odyssey around Europe>>>