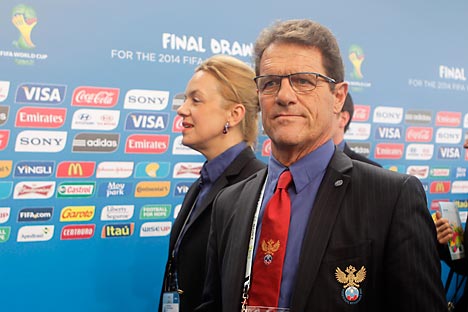 Very little is expected from the Russian football team, which returns to the FIFA World Cup after a 12-year gap. Fans are banking on a spirited effort powered by the team’s Italian coach

In the minds of Russians, the Italy is not seen as a nation that is associated with punctuality and discipline. However, Fabio Capello, in the first few days after his arrival in Russia, managed to completely destroy these stereotypes. Keeping his predecessors in mind – the good- natured Guus Hiddink, who by the end of his stay in Russia simply spoiled the players, and the surly Dick Advocaat, who did not even hide the fact that he was primarily interested in the size of his bank account, and not in the training process – Capello looked almost like a tyrant.

While the Dutch coaches managed to come to Russia only on short visits, Fabio managed to catch three to four matches of each round of the club championships. He gradually changed half the players on the national team. The indispensable players of Advocaat – Arshavin, Pavlyuchenko, and Pogrebnyak – Capello were struck from the lists, and in return found defenders Kozlov and Eshenko, while making Fayzulin and Kombarov the major players. For the World Cup, Capello will be taking players who just a few months ago would not have even dreamt of being on the national team. Such a personnel policy of Capello, first of all, forces players to constantly work hard, and shows them that no one is automatically guaranteed a spot in the lineup.

As far as the main principles on which he bases his work, Capello often repeats the word “respect.” He operates according to a strict order: players must comply with his schedule to the minute, and the staff is disciplined, like in an expensive hotel. Journalists, in general, are not allowed into any hotel where the team is staying, except during official events.

Who will be scoring

The main feature of the current Russian national team – is its organization. On this team, there are no players that will cause lines of fans, eagerly seeking to get autographs. Moreover, the names of most of the players, outside of Russia, are known only to sports experts. Nevertheless, each of them knows exactly what his role is on the field, and this is where the pressure on the opposing team comes from.

“The team has become more solid, cohesive,” says former head coach Valery Gazzaev. Yuri Semin, another trainer who at one time also worked with the Russian national team, agrees with him. “I would like to note the unity, which Capello brought to the team. We started to play better defence, although some of our defenders, because of their age, sometimes cannot keep pace with the fast players of our opposing teams,” says Semin.

Semin’s complaint about the speed applies primarily to the central defenders. Sergei Ignashevich will soon celebrate his 35th birthday, while Vasili Berezutski will turn 32 in June. However, Capello simply cannot find replacements for these two.

Nevertheless, the coaching staff has a huge choice when it comes to players in the midfield and on the flanks, where two or three people compete for each spot. The whole game of the Russian team is built on quality midfield play. Nevertheless, there are some issues when it comes to attacking. Scoring goals in Brazil will be the task of the best scorer in Russia today – Alexander Kerzhakov. He is the only team member with experience of playing in a world championship. In 2002, being a young man, he travelled to play in Japan. However today, Alexander belongs to the veterans group, and at his club, St. Petersburg Zenit, he spends the majority of his time warming the bench. Another possible attacker is the Dynamo player Alexander Kokorin, who undoubtedly has the talent, but not the experience. Moreover, he is not always characterized by his consistency. Therefore, it is in the attack, that we will find the most vulnerable point of the Russian team.

Searching for a way to get through

Recognizing the fact that in this tournament, the Russians will be far from the favourites, fans and experts alike feel that team’s performance in their group will be strong, especially given the fact that the opponents at this stage are not from the most formidable national teams – South Korea, Belgium and Algeria.

“Making it through the group round may not be guaranteed, but it will not be a surprise if it happens. I am convinced that we will make it into the playoffs,” said Vyacheslav Koloskov, honorary president of the Russian Football Union. Vladimir Stognienko, a well-known television newscaster, who will be broadcasting the matches of the Russian national team in Brazil, agrees with him: “I am convinced that we will be in the quarterfinals. Then, if we manage to avoid playing the Germans, I am sure that will go on and on. Although, in principle, just making it past the group round will be a great achievement for us, since 1986 we did not succeed in doing even that. Moreover, my optimism is based primarily on the coach. Capello is not perfect, but he is the strongest part of our team.”

However, Fabio Capello himself is not in a hurry to make any dramatic statements. “We are participating in the World Cup after a long break, and this tournament is completely different from any other,” he says. “First, we are preparing for the group stage. If we can get through that, it is quite probable that in the quarterfinals we will play against Germany or Portugal. However, we will think about that later. Let us not hurry, and go one step at a time.”