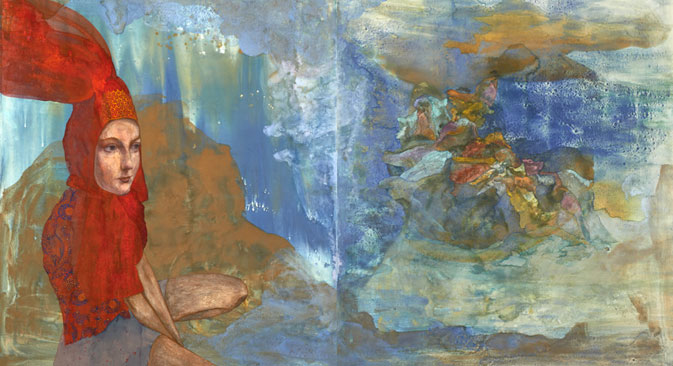 'Criticism is an antidote to conceit.' Source: Richard Whitelaw

Ancient, modern; religious, secular; particular, universal. Grounded in the Russian icon tradition, but drawing on a huge diversity of influences, from pre-Renaissance portraiture to media culture, the hauntingly unique art of Veronica Smirnoff inhabits a fantastical world of its own.

Moscow-born artist Veronica Smirnoff has lived in London for more than 20 years, having left Russia to attend boarding school in Edinburgh in the mid-Nineties. Educated at the world-renowned Slade School of Art (UCL) and the Royal Academy, Smirnoff celebrated her first major solo exhibition in 2008, at the Galleria Riccardo Crespi in Milan. Exhibitions in Moscow, Paris, Berlin, and New York soon followed.

Would-be worlds, an exhibition of Russian contemporary art which, in the words of the press release, “explores space as illusory, ephemeral places and fairytale worlds, both magical and somewhat foreboding”, opened on May 30 at the Erarta Gallery, Mayfair. Inspired by the work of Smirnoff, the timing could not be more appropriate: the bi-annual event of Russian Art Week opens on the same day, bringing together the major London auction houses for a week-long celebration of Russia’s artistic heritage.

According to Smirnoff, it is “an exhibition which focuses on the relationship between place and myth, familiar and peculiar”.

Major buyers and collectors will be present. But the artist, whose preferred medium is traditional egg tempera on gessoed wooden panels – historically associated with Russian icon-painting – remains unfazed. In fact, she is used to the close attentions of the rich and famous, especially since her work caught the eye of showbiz power couple Sting and Trudie Styler, which led to a private commission for their London home. Commendation indeed.

James Lawrence caught up with one of the Russian art world’s most dynamic and passionate ambassadors.

Russia Beyond the Headlines: What can we expect from the Would-be worlds exhibition?

Veronica Smirnoff: The body of work showcased at Erarta draws upon my travel experiences, as well as an ongoing fascination with ancient cartography. My impetus was to conjure the imaginary location of the mapmaker when he/she begins to map the world and record the findings along that journey. Entirely imagined landscapes will invoke a world that has little to do with geography.

RBTH: Art is a highly competitive business. What drew you toward this particular endeavour?

V.S.: I have always been fascinated by creative processes, music and drawing. It was an important outlet and escape. In retrospect, I wonder if painting represented an internal journey and a means of processing the chaos that was going on around me [Smirnoff grew up during the fall of the USSR] and my subsequent relocation to the UK. It was very affecting when my father, shortly before his death, expressed enthusiasm for the opportunities of a better life I had been given, especially in the context of the constraints which dictated his life. His reasoning was plain: “You can do something different, something we couldn’t.”

RBTH: Apart from your own creative discovery, which Russian – or international – artist(s) inspired you to pursue an artistic career?

V.S.: Zinaida Serebriakova was a major influence on my early paintings. Her powerful images and romantic 19th-century sensibility square well with the best of the Russian painting tradition. Serebriakova moved to Paris in 1924, leaving her four children behind. Her subjects were accompanied by feeling of displacement and separation from her family. Other influences include contemporary artists such as John Currin, Elizabeth Peyton and Alex Katz.

RBTH: What was your breakthrough piece of work? Something that caught the attention of the international art community and media?

V.S.: Last year, my work was shown as part of the Thessaloniki Biennale of Contemporary Art in Greece. Entitled Everywhere but Now, the theme of the Biennale focused on the Mediterranean Sea and its exuberant cultural history. The current state of Greek economic turmoil and crisis of national identity and the questioning the role of art in a world where much is in flux caught the media’s attention.

RBTH: Is this your proudest moment as an artist?

V.S.: I’m more proud of my first large-scale painting on wood, using the egg tempera medium, Village. That said, I could never live with the piece.

RBTH: Can you tell me then a little about the Russian tradition of painting on wood? When did you adopt this style?

I was first exposed to icon painting when still a student at the Slade. I went to the monastery where my panels now come from and became an apprentice to the icon painter. The boards are made at the monastery outside Moscow. They are laboriously constructed by the monks and acolytes who carry out their penance in the monastery’s hierarchical framework, using the ancient technique of gesso on solid wood. This lends the work a religious undertone, and at the same time heightens the focus on this conjunction of old and new.

RBTH: So what is your creative process, how does it all start?

V.S.: I tend to work mainly at night. Nocturnal endeavour makes me more focused and disconnected from the world. Prior to painting, I create numerous drawings, often made of tiny dots or thick outlines. The dots medium references etching and Old Masters drawings that follow the same technique to transfer images on to a panel. Some paintings originate from quite structured drawings; some are a result of marking down ideas and loose sketching. I also have many artists’ catalogues spread out before me as I work. These art historical references are less about appropriation and more about intuition, acknowledging beauty and splendour, realism and absurdity.

RBTH: What is the best thing about your work? And its most challenging aspect?

V.S.: I think that one should possess an equal measure of self-confidence to create and self-doubt to enjoy the work. The best thing is always the practice of painting, which remains the most challenging subject!

RBTH: You have done commissions for a few notable people, does this excite you more than exhibiting?

V.S.: It is really fun and stimulating to work on commissions where first-hand feedback and engagement with people like Sting and Trudi Styler is your reward. It is a more structured process and a less lonely one. Equally, I love exhibiting – the work feels truly resolved once it’s out in the public eye.

RBTH: Art appreciation is of course, highly subjective. How do you handle criticism?

V.S.: I am convinced that criticism is an antidote to conceit. You must believe in what you do and go with what you know best; that way any criticism becomes a constructive and welcome development encouraging a meaningful exchange and creative dialogue.

RBTH: Speaking of criticism, has the current international discourse over Russia’s actions in Crimea affected how people respond to you, and your work?

V.S.: My work is not about ‘Russianness’, or politics, though it does draw on my full range of experiences and influences, partly and deeply Russian but very significantly from elsewhere. Having been born in Russia, I was educated in the UK and lived in Vienna for some time.

RBTH: Finally, what does the future hold for you as an artist?

V.S.: After a couple of busy years exhibiting in the UK, Italy and Greece, I am excited by the prospect of spending uninterrupted time in the studio and embarking on a new body of work. Let’s just say there are things in the pipeline, but without a set time frame for completion. I like to work outside set schedules and time frames: that spawns boundless possibilities.

Read more about Russian Art Week in London on The Kompass, special RBTH section for all UK-Russian cultural events.