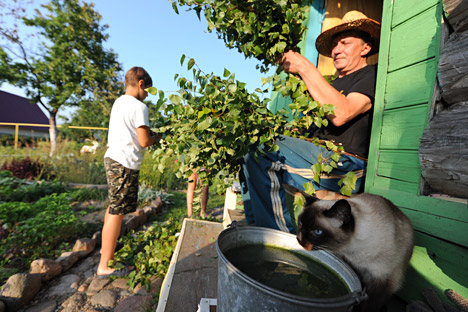 In summer, many Russian city dwellers escape to the dacha. Source: ITAR-TASS

When Natalia Filonova talks about her dacha, she can’t talk quickly enough. She rattles off the most recent improvements she’s made with breathless pride: 23 new trees, a shower, hand-sewn curtains.

“At the dacha, no one dictates anything to me, what I can change, where I can dig and where I can't,” she said. “I love working with my hands there, because I know that next time I come I'll get to enjoy the results.”

In summer, many Russian city dwellers escape to the dacha, the rural cottages that occupy a deep place in the national imagination. They have taken many forms, from summer estates built by Petersburg aristocrats, to wooden shacks rented by the imperial middle class, to palatial “kottedzhi” constructed by today's new rich.

The dacha has always been a place of many meanings, writes historian Stephen Lovell in his book “Summerfolk: A History of the Dacha, 1710-2000.” Beginning in the mid-19th century, when railroad construction led to a dacha boom, “a kind of moral panic” surrounded the dacha, Lovell said, which was mocked as bourgeois, crass and unproductive.

In the early Soviet era, dachas were awarded only to cultural and scientific luminaries and top officials. After World War II, people were allowed to maintain small vegetable plots, which evolved into both sources of nourishment and getaways from cramped communal apartments.

Ira Kostikova’s parents built their dacha in the 1950s, when they were allotted a plot of land outside Moscow. “As soon as school ended, I would spend the entire summer there,” said Kostikova, now a pensioner. “We would gather in groups of 20 or more, and the kids would ride bikes and swim in the river.”

For Maria Stambler, the dacha's connection to family and friends became especially vital when, as a child, she was uprooted from the Moscow area to the U.S. “Through summers at the dacha I reconnected with my motherland and experienced a totally carefree childhood, where the most difficult decision was which lake to go to for a swim or who's coming over to whose house to play dolls,” she said.

Many Russian teenagers find their first boyfriend or girlfriend at the dacha, said Ilya Kuganov, another young Muscovite. “In the city everything’s so complicated — you have to call and ask someone out, meet somewhere,” he said. “There you can just be alone together in nature.”

Learn some Russian expressions: At a country house

According to Lowell, part of the dacha’s contemporary significance stems from the fact that middle class and white collar Russians, unlike their American and British counterparts, have remained in densely packed cities rather than migrating to suburbs, making the summer home a vital respite from urban life.

When Filonova and her husband bought their dacha four years ago, they knew nothing about plants, but she threw herself into learning. “I had a kind of gardening orgasm,” she said with a laugh. “I just dug and dug.” The couple's son, then five, also got involved: “Every morning before breakfast he would race out to check on his tomatoes.”

For Americans based in Moscow and St. Petersburg, being invited to a Russian dacha is a rural rite of passage.

“The first time I went to a dacha was seven years ago, to visit a friend's host mother,” said North Carolina native Sarah Martin. “We bought bread and meat in the neighboring village and took our vegetables from the garden. Milk, sour cream and tvorog [cheese curds] came courtesy of Auntie Valya across the street, who has a couple of cows.”

A vacation at the dacha

A dacha weekend with friends

Martin’s biggest dacha revelation came more recently, when she used a samovar for the first time: “It turns out that real samovars have a stovepipe in the middle where you make a wood fire!”

For Americans married to Russians, the dacha provides one-on-one time with the in-laws. “I try to impress my handyman father-in-law with my pathetic carpentry skills,” said Daniel Taylor, a teacher.

As Moscow expands, dacha plots outside the city are getting considerably less rural. The post-war village of Kostikova’s childhood has given way to a densely packed settlement, with houses separated by high fences standing mere meters apart. But she’s staying put.

“I could never part with our dacha,” she said. “It preserves the memory of my parents, who poured their souls into it and had many happy times there. Then I spent my life there, and now my daughter is there. It's truly our family nest.”

A piece of Russia on the Chester River

Though stationed an ocean away from Moscow, Russian Ambassador Sergei Kislyak doesn’t have to go without his favorite summer pasttime. In 1972, the Soviet government bought what was once known as Pioneer Point Farm, a historic estate overlooking the Chester River in eastern Maryland, from an American automotive executive.

Ever since, the 45-acre property has been used by as a country house, or dacha, by Soviet, and now Russian, ambassadors to the United States.

“To me it represents a unique and very harmonic, though extremely unlikely, mixture of styles: American post-colonial buildings neighbor with a dozen houses built in accordance with the classic tradition of Russian urban architecture,” Ambassador Kislyak said.

The dacha’s main residence, where Kislyak spends weekends with his wife and daughter, is an imposing 1920s Georgian structure built in red brick, while a more humble shingled guest lodge greets visitors. “It is an amazing combination, but it does the trick: embassy employees feel at home there....” the ambassador said.

The dacha –which includes a tennis court, a banya (sauna), and plenty of space to gril– frequently plays host to international events, such as the Victory Day celebration on May 9 and a regatta held jointly with the Sailing Club of Chesapeake. “In recent years, we have invited our immediate neighbors from the Bay to join us in celebrating the end of summer,” Kislyak said.