Spying in Style: 007 comes to Moscow 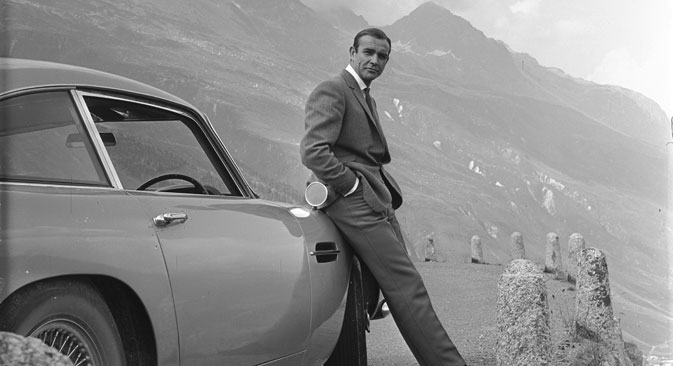 Sean Connery relaxes on the bumper of his Aston Martin DB5 during the filming of location scenes for 'Goldfinger' in the Swiss Alps. Source: Notice - © 1964 Danjaq, LLC and United Artists Corporation.

An exhibition dedicated to Britain’s most famous fictional spy opens in Moscow on June 10. ‘Designing 007: Fifty years of Bond style’ goes on show at the Moscow Multimedia Art Museum. Meg Simmonds, archive director for EON Productions, that releases the James Bond series, spoke to RBTH about the show and revealed some of Bond’s secrets.

Russia Beyond the Headlines: There was 50 years of Bond in 2012 and you had a great exhibition at the London Barbican. What is new about this exhibition in Moscow?

Meg Simmonds: The exhibition in Moscow will be the largest we’ve ever had. Each time you move to a new location, you have a different type of space and you have to reconfigure everything. For the Moscow exhibition we added new details from the Skyfall (2012), which came out after the exhibition in the Barbican.

RBTH: You have five floors of the Multimedia Art Museum for the exhibition. What are they devoted to?

M. S.: Every section will be themed, but it’s not chronological. It starts with the golden room, because the whole exhibition was inspired by the golden anniversary at 50. This interior was inspired by the amazing set that Ken Adam designed for the Goldfinger (1964), a movie that was a significant mark in Bond history. The first films were successful, but when the directors got to Goldfinger they had to establish what people wanted from Bond and to provide elements that people were looking for in Bond.

RBTH: What would you pay special attention to?

M.S.: Each room has its specialty. And what I like about the exhibition is that it shows a lot from behind the scenes – the creativity and the imagination in every department from the story board artists to the set designers, to graphic artists, to costume designers, to scene builders. All of the areas have amazing talents on display.

RBTH: What artefacts are on show at the exhibition?

M.S.: All the elements that have helped the series survive for so long and so successfully. We have a section on MI6, a section on Q’s lab, we have wonderful Casino costumes and also exotic locations which are again a Bond hallmark.

RBTH: Which exhibits are the most expensive?

Russian Bond girls are brought together in London

M.S.: The most expensive is the Aston Martin DB5. It is like the car in Goldfinger which was the first Aston Martin driven by James Bond and which became iconic for James Bond. The one that is on display was in GoldenEye (1995), you can also briefly see it in Tomorrow Never Dies (1997) and we used it in The World Is Not Enough (1999) and in Skyfall.

RBTH: Do you have here any artifacts from the very first films?

M.S.: We have one prop that survived from Dr. No (1962), which is a champagne bottle. And I brought back one of Sean Connery’s coats, which is here now on display too.

RBTH: How Bond’s style was created?

M.S.: A lot of people assume that style refers to only the costumes. But it’s Bond’s style in every aspect. For instance, you can see it in some of the miniature models. When you have an ice-yard – they do exist but you will never see the one that we have in Bond’s film. It’s very unique, made by our art department.

Or you will see in Q’s branch, some of the concepts are for the Q-boat. It was based on a bean boat, but it looked too ordinary so the art department put their own spin on it. At the end it doesn’t look like any boat you could see, it’s special and it could accomplish the role and do all the amazing things that it did in chases.

RBTH: Have scripts been modified right before the shooting because the art department found some great thing that could be used in the film?

M.S.: Sure, in our archive we have a lot of drafts; even for the first film Dr. No, we had at least five drafts. Even if you look at the shooting script - the last script that we use - it won’t always match the film: things change every moment, and it’s a part of the creative process and collaboration of all the departments.

RBTH: Is there any chance that a Russian actor could play Bond one day?

M.S.: You never know what will happen. But the success and the longevity of the series is due to the fact that Bond is a British spy and character and there is something from the traditional British stereotypical persona that works well within the story.

I think that the stereotype among lots of Brits is that they are very insular and they don’t show their emotions. And that’s the element of Bond. So it will be difficult even for an American to play him.

RBTH: Are there some elements in the films connected with stereotypical Soviet KGB spies?

M.S.: When the series started it was the Cold War and the villains tended to be Russians (not always of course). And then it started changing and by 1977 when The Spy Who Loved Me came out, Barbara Bach played a Russian girl who worked with Bond - so we have progressed in that since the Cold War time.

Now the villains are people like cyber terrorists that have no country particularly. That’s another ingredient that has contributed to its longevity – that the villains and plots progress and become current and don’t stop in the past, so that people can relate to them.

RBTH: Knowing Bond so well, would you ever want to be a Bond girl?

‘Designing 007: Fifty years of Bond style’ is on display at the Moscow Multimedia Art Museum from June 10 until September 7. Tickets cost 400 rubles ($12, £7). For more information visit the website.