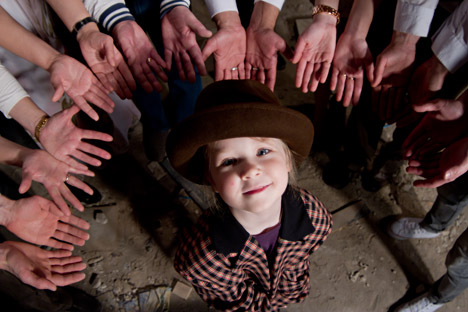 The Moscow Shadow Theater was founded in 1944. Source: Alexander Savelyev

Founded in 1944, the the Moscow Children's Shadow Theater continues to both innovate and work with old fairytale favorites.

"Would you like to take a look at the shadows? We keep them in a storeroom." These were the mysterious words that greeted me when I entered the Moscow Children's Shadow Theater. I was of course surprised by the notion that shadows can be stored somewhere. It turns out they can.

Shadows are basically puppets, except that during a performance they are covered by a screen, with only their shadows visible. And in this case, the reason for storing shadows is that the building housing the Moscow Children's Shadow Theater is currently undergoing renovations, so the theater is renting a warehouse in a Moscow industrial zone.

Shadow play is an ancient oriental art, and is believed to have originated in China during the Han Dynasty, around 200 BC. According to a beautiful legend, Emperor Wu of Han was so devastated by the death of his favorite concubine that his courtiers sought to bring her to life by creating a cut-out figure of her from donkey leather and color fabric.

They did not dare make a three-dimensional doll of the dead woman, probably for religious reasons, but her shadow did come alive behind a silk screen. 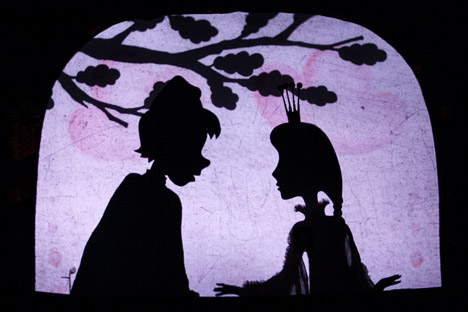 Despite Russia’s geographical proximity to the orient, shadow plays were to reach Europe first, brought by French missionaries from China in 1767. Russia had to wait until the end of the 19th century to get its first taste of this ancient oriental art.

Script for a tiger’s tail

"When I studied at drama school, we were not taught shadow play, so I had to learn everything as I went along," says actress Larisa Volkova. She has been with the theater since 1991, when she came here straight after school. It took her a while to settle in. At first, Volkova worked as a radio operator, then took part in various skits. And then she was entrusted with the part of a tiger's tail in a children's play.

"In the play 'The Circus', there was a tiger,” says Volkova, explaining her first job in the theater. “Its body was operated by one actor, with two others operating its front and hind legs. I kept asking the director: 'Give me the tail!' He would reply: 'The tail is difficult.' 'What can be difficult about it? You just take it and wave it.' 'Don't you know there is a script for the tail?'”

"I thought you just waved the tail here and there, and there turned out to be a script! If you moved the tail not according to the script, it could end up inside the tiger's bottom and it would look ugly. Besides, the tiger has got a temperament and a character of its own: When it is nervous, its tail moves one way, when it sees a tigress, another… I grew to love my tail very much and even talked to him," she says. 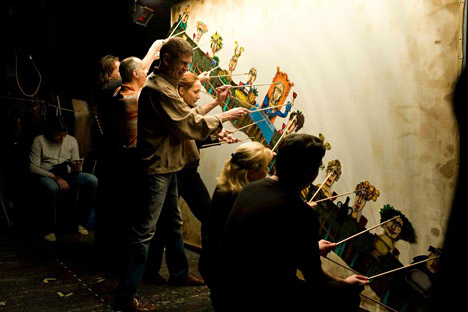 Volkova talks not only to the tail but also to her other puppets: "Puppets are like children. It is no use getting angry with them. All you can do is try and find a way to get close to them. If you manage to strike a deal with them, then all your suffering will be rewarded."

The Moscow Shadow Theater was founded in 1944. In the 1960s, it got a new artistic director, Emil Mey, who brought in another technique, that of three-dimensional puppets behind a screen. It was in this technique that the theater's longest running and most popular production, poet Korney Chukovsky's “Doctor Aybolit” (“Doctor Ow-It-Hurts”), first premiered in 1963.

To say that Aybolit was popular in the Soviet Union is an understatement. The story of a doctor who, together with his pets, sets out on a journey to Africa to treat monkeys for tonsillitis and scarlet fever was one of the most popular and frequently quoted fairy tales of its time.

Its particular attraction was the baddie of the piece, Barmalei, who liked eating small children and did his best to upset Doctor Aybolit's humanitarian mission. The theater's production of this tale received the blessing of the patriarch of children's literature himself. Chukovsky was 81 at the time. Although he died several years later, the play is still performed by the theater, more than half a century on.

While “Doctor Aybolit” is the theater's oldest of the current productions, the newest is still in rehearsal. Called “Sherlock”, it is based on three stories by Arthur Conan Doyle. The production will premier early next season.

The managing director of the theater, Margarita Modestova, explains: "We want to attract teenage audiences and older. For the time being, we are a theater for very young viewers, who stop coming here once they reach 10-12. That's why we have decided to do Sherlock Holmes."

However, it turns out that plays for the very young can even be a huge success with marines. The theater once went on a tour to the town of Severomorsk on the Kola Peninsula, where the Russian Northern Fleet is based.

Although the town lies well beyond the Arctic Circle, thanks to warm currents the water does not freeze even in winter. The actors were stationed on a large amphibious warfare ship called Mitrofan Moskalenko, with a deadweight of 140,000 tons.

Disabled express themselves in special theatres

"There was that huge hold for transporting tanks and armored vehicles,” recalls Volkova.

“There were no tanks there at the time, so we stayed there instead. We would go ashore, give a performance for the kids and then come back to the ship. In the end we wanted to thank the crew for their hospitality. But all our plays are for children.

“The feistiest of them is ‘The Humpbacked Horse’. It is a wonderful fairy tale by Pyotr Yershov about the adventures of a peasant and his little humpbacked horse. So all the crew, officers and marines, assembled on the ship and we performed ‘The Humpbacked Horse’ for them. The hall was packed. Some marines were so touched that they even cried."