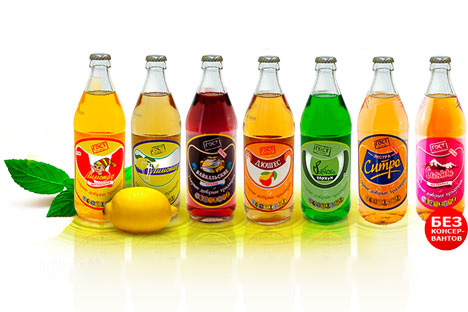 Russian specialists developed several successful tonic beverages based on local herbs. Among them are the renowned Soviet soft drinks Baikal and Sayany.

The vast spaces east of the Ural Mountains are home to plants that cannot be found anywhere else in the world, many of which are recognized as healthful and possessing useful properties.

Back in the 1950s, specialists from the Soviet Institute of the Food Industry decided to flavor a regular soft drink – a heavily carbonated beverage based on lemon juice and sugar – with one of these wonder herbs: Leuzea carthamoides.

As a result, Sayany – a soft drink that gets its name from the mountain range in Eastern Siberia where Leuzea carthamoides grows in the wild - was patented in 1960.

The label on the Sayany bottle features a maral (a species of Siberian deer, also known as the red deer) against a mountain pass in the background. Local hunters discovered the useful properties of the herb when they noticed that sick animals dug up the plant’s roots and ate it as a cure. Hence the popular name for Leuzea carthamoides: “maral root.”

What and how often people drink in Russia

It is unclear how true this legend is, but pharmacologists have found a plethora of useful alkaloids in the herb, including Ecdisten, which is a substance that acts like an anabolic steroid but has no harmful side effects.

Ecdisten is recommended for athletes who want to boost their muscle mass without causing a hormone imbalance. Sayany is also safe for children, as it contains just enough Leuzea to add an exotic spicy tinge on top of the lemon flavor.

Another sweet soft drink from Russia, this one much more famous than Sayany, also has a Siberian name – Baikal, in honor of the largest freshwater lake in the world. The herbs that give this beverage its distinct aroma and pleasant bitter, astringent taste can be found in the European part of the country and even in Europe itself. But these herbs also come with a legend.

The dark brown Baikal, indistinguishable in color from Coca-Cola, was allegedly specially created to displace the depraved Western soft drink – a symbol of the decadent Western lifestyle, it first went on sale in the USSR in 1985 - in the Soviet diet.

If this is true, the Communist ideologues deserve a pat on the back. The combination of the laurel, coriander seeds, licorice root, and several other ingredients that give Baikal its special bouquet proved so successful that no aggressive ad campaigns by Western companies, nor even Coca Cola, could disrupt its firm niche on the Russian market.

Russians are nearly as proud of Baikal as of their vodka, and the soft drink truly deserves a try. But be careful – not all of the factories that produce this beverage conform to Soviet standards.

Only a handful of companies – as a rule, those in major cities – adhere strictly to the recipe. You can probably try an authentic ice-cold glass of Baikal with its truly intended taste in Moscow or St. Petersburg. You won’t be disappointed.