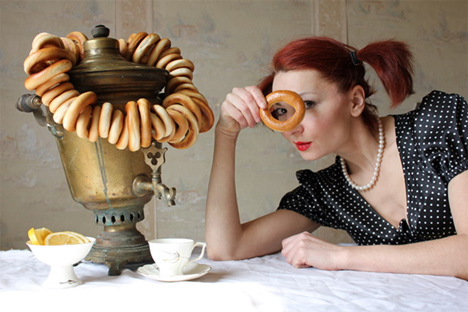 “There's nowhere in the world where people drink tea the way we do in Russia,” Olga Yurkina, the curator of a new exhibit on tea called “On Samovars and Other Things”, told RBTH. “In China and Japan, the tea itself is the purpose of the tea ceremony. There, the table is set just with the tea, and in England, with tea and cream. However, in Russia, tea is an excuse for a long conversation,” said Yurkina.

The exhibit, which is being held at Moscow’s All-Russian Decorative Art Museum, explores the history of Russia’s long-standing love affair with tea, with particular emphasis on the samovar (literally, “self-boiler”), the metal urn in which water for tea is traditionally heated in Russia.

The first step of the traditional Russian tea ceremony is to light the firewood and wait for the water in the samovar to boil. When it starts to boil, the samovar will begin to whistle, puff, then truly seethe.

Once the water is sufficiently hot, the samovar is brought to the table and placed by the teapot. The Russian tea ceremony differs from the Japanese and Chinese in that the brew from the teapot is first placed in the teacups and then diluted with hot water from the samovar.

“It is absolutely necessary that there be pies, candy, and different delicacies on the table while drinking tea,” explained Yurkina. “In Russia, tea is not just about the beverage, but about the accompanying treats as well. While we drink tea, we sit for a long time and reflect on various topics.”

The samovar stands in the center of the table, towering over the teapot. Various treats are laid out on top of the snowflake-patterned tablecloth. Gingerbread, baranki (small crispy bagels), sweetbreads, and candy are served.

The sugar is served in broken little pieces, or lumps, that are to be placed in one’s mouth while drinking the tea. Next to the treats are the teacups themselves, sitting on top of deep saucers. In earlier periods of Russian history, the preferred way to drink tea was out of the saucers themselves.

The drinker would hold the saucer with three fingers and then slurp the tea out from inside it. Drinking tea used to be a very noisy and quite engaging endeavor.

There is a legend that in the 16th century, the Cossacks traveled through China and brought back what they learned about tea. However, the first documentation of tea in Russia dates back to the court of the first tsar of the Romanov dynasty, Mikhail, which is a century later than the legend claims.

The real story of tea begins in Russia during the reign of Peter the Great. It was during that period that the emperor signed an agreement to allow for the trade of goods between Russia and China. Already by the 1720s, China began to supply tea to Russia on an industrial scale.

From that moment on, tea consumption became constant in Russia, and specifically the consumption of Chinese tea. This differed from Europe, where tea was imported from India on British trade ships. On the sea voyage, the tea dampened along the way and had to be dried again upon arrival. In the process of drying, the heat affected the taste.

The tea that traveled to Russia from China came via Siberia and the Ural Mountains. The caravan voyage usually took six months. As a result, Europe and Russia had two different flavors of tea.

"We have become accustomed to thinking that in China they drink green tea and that they sold us black tea to drink,” Yurkina said. “However, that was completely coincidence. In the beginning of the tea trade, we primarily imported black tea, and then started to buy only black. If say, 300 or so years ago, we had imported green tea, then everyone in Russia would be drinking green tea.”

Russia – birthplace of the samovar

There was no electricity, so we had to heat the water by lighting firewood. That is why the samovar was invented. There have been several versions of the story of how the samovar came to be. The first story involves the samovar being brought back by Peter the Great from the Netherlands, after which Russian craftsmen recreated it.

Another story involves the samovar deriving from China, after which the Russian craftsmen, as they should have, recreated it. And then in the third version, and this has been historically verified, samovars were produced in the 1740s in the Demidov factories in the Urals.

In the Urals, a mining and arms industry had developed, and factories had thus been built. The first in a dynasty of Russian industrialists, Nikita Demidov, brought craftsmen from the city of Tula, where he was born, to the Urals. It was they who invented the samovar.

Tula samovars became famous all over Russia, and the craftsmen began to open up their own shops upon returning. There were different kinds of samovars. There was the portable samovar for one cup of water, and then there was a stationary samovar that could hold ten liters of water.

There were “samovar-kitchens,” which consisted of three sections to allow for both cooking and boiling water. "Samovars were not cheap, and in the 19th century, the average cost of a samovar was ten rubles in gold – a whole month’s salary. However, people saved their samovars, and once you bought one, you had it forever. They were often passed down as inheritance,” Yurkina said.

Wood-burning samovars are sold in Tula to this day, and many people still purchase them. To boil tea using firewood is not just exotic, but also a tribute to tradition. Also, think of how much more delicious the tea will seem if it is preceded by the ceremonial heating of the water, the setting of the table, and the aroma of the samovar itself, which creates an unforgettable atmosphere within the home. 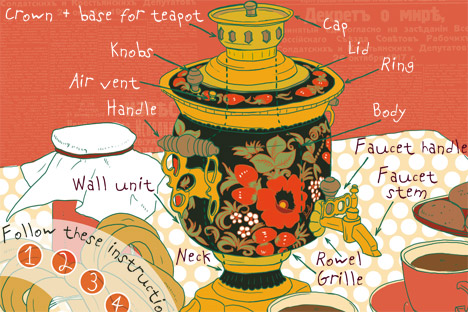 Click to enlarge the infographics. Drawing by Natalia Mikhaylenko