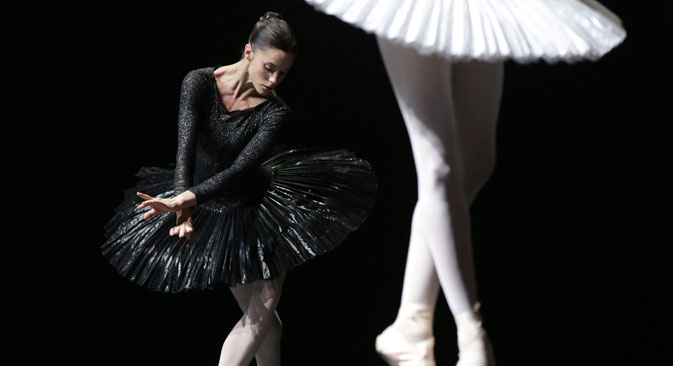 A scene from Silhouette, a one act ballet production by the Scottish Ballet. Source: ITAR-TASS

The ballet season in Moscow went out with a bang in June. In the span of one month, the Russian capital had the chance to see three leading British ballet companies: the Scottish Ballet, the Royal Ballet Covent Garden, and Sadler's Wells. A tour of this magnitude was unprecedented in the history of professional ballet in Russia.

In total, the British companies gave 25 performances of six different programmes, allowing the most discerning viewers and critics to receive a comprehensive view of the country's ballet offerings.

The series began during the International Chekhov Festival, which was the main partner of the UK-Russia Year of Culture in the field of theatre. The Scottish Ballet of Glasgow is by Russian standards a very young company (it was founded in 1957). However, the breadth of its performances was quite impressive. The dancers presented a very diverse repertoire of 20th century classics, as well as new items and new versions of classical ballets. To avoid being compared with its more established competitors, the Scottish Ballet's repertoire is focused on original programmes, which were in full view during the tour.

To begin with, the Scots performed Poulenc’s Silhouettes, staged by Christopher Hampson. The piece was marked by a mixture of humour and classical ideals. They also performed Schoenberg’s Pierrot Lunaire, staged by Glen Tetley, in which Rudolf Nureyev once gave a glowing performance. The company took a risk and showed the work of its new choreographers in the format of a matinee performance. Their artistic value, with some exceptions, was not terribly impressive, but the theatre made ​​it clear that it does not simply rely on visiting artists, but also cultivates its own talent.

However, the company’s strongest showing was The Highland Fling, which was originally produced in 1994 by the brilliant Matthew Bourne. Presented exclusively by the Scottish Ballet, this so-called "romantic wee ballet" seems to be staged nowadays, just before the upcoming referendum on Scottish independence. Bourne’s irony regarding national characteristics comes across as soft here, but it was sharp as a sniper when he, ahead of the event, warned that the national element was just a trifle when compared with the social. 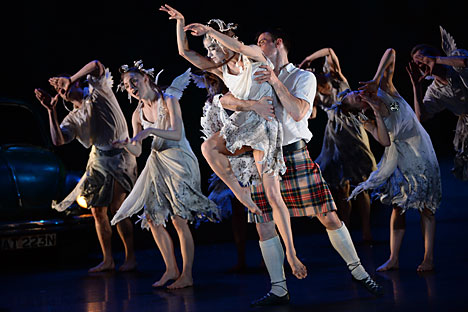 Sophie Martin and Christopher Harrison from the Scottish Ballet during the rehearsal of Scottish dance. Source: Vladimir Vyatkin / RIA Novosti

Russell Maliphant’s Still Current is about how modern man copes in the digital age. The work was performed by the Sadler's Wells company. Maliphant is known to Russian audiences as a contemporary dancer and choreographer who can see the natural beauty of the human body. In his last visit to Moscow, he impressed audiences with his duet with the brilliant Sylvie Guillem, but the current Russian tour, which included Kazan, Yekaterinburg, and Voronezh, has earned him new fans. The Chekhov Festival organised the tours of the Scottish Ballet and Sadler's Wells with support from the British Council and various sponsors. The Royal Ballet Covent Garden tour, was supported by the Russian Ministry of Culture.

The best ballet company in the UK showed off its varied talents. It offered a programme of three one-act plays that covered the major milestones of the Royal Ballet and its present-day achievements. The founding father of English ballet, Frederick Ashton, presented Rhapsody, which he apparently chose in light of the Russian audience (as it was set to music by Sergei Rachmaninoff).

More interesting, however, was Tetractis - The Art of Fugue, which was staged by the incredibly serious and clever Wayne McGregor. A ballet intellectual, he has long been a favourite of the Russian public; his ballet Chroma is performed by the Bolshoi Ballet. However, the loudest applause was for Christopher Wheeldon’s DGV: Danse à Grande Vitesse, which pushed the dancers through a torrent of motions in a way seemingly impossible for the human body. Wheeldon is not radical; his dances are always very humanistic. It is very unfortunate that Moscow could not see his latest premiere at the Royal Opera House, the contemporary and very beautiful piece The Winter's Tale.

The Royal Ballet’s performances provided a classic introduction to Manon in the music of Jules Massenet and staging by the famous British choreographer Kenneth MacMillan. The majority of the piece in three acts was fantastic in its expert direction and perfectly in-tune performance. It is known that Kenneth MacMillan was inspired by the legendary performance of Romeo and Juliet by Soviet choreographer Leonid Yakobson, which was put on by the Bolshoi Theatre in London in the mid 20th century. Though he was able to develop his own highly original style, Russian culture was, as a result, embedded in the performances and classical ballet tradition of the English stage.

It is also important that the theatre preserved MacMillan’s masterpiece, keeping it in excellent condition. The Royal Ballet included four soloists, which is difficult even for a theatre of its great richness. The graceful prima ballerina Marianela Nuñez was delightful. But, of course, the main draw of the evening was the performance by Natalia Osipova, a former star of the Bolshoi Theatre, and now a prima ballerina at the Royal Ballet. Her performance justified the anticipation. Her fallen beauty Manon Lescaut was much more passionate than is usually presented in theatre, but the public had been dying to see such a depiction of the heroine.

Russia has traditionally been fond of ballet. However, it is difficult for those who themselves are not particularly inclined to visit the theatre to understand why fans would spend their work holiday in June or any other time to see ballet. Their reasons, though, are actually quite obvious. This attachment is much more subtle than a passion for football, and the ballet is available for a shorter period of time. Sports championships are played regularly, but British ballet tours on this scale are rarities. This ballet tour had an influence on Russian values, priorities, and its understanding of ballet in the world.