Taking the long road to Crimea 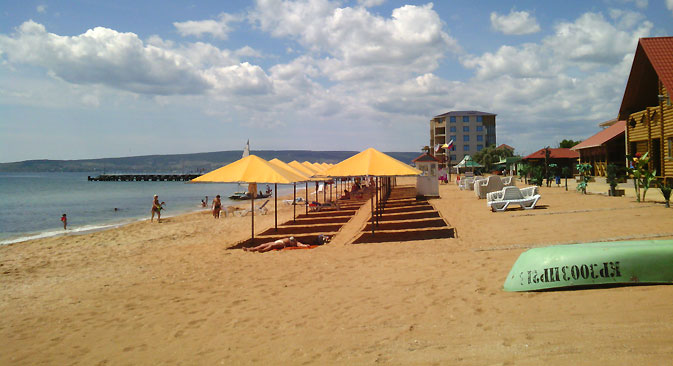 Sergei Moskvichev recently travelled from Moscow down to the Crimean city of Feodosiya by car and ferry. During the trip, he spoke to local residents about how their lives have changed in the last few months. Here he shares his impressions of the journey and the concerns of the people he interviewed, who complain of rising prices but welcome stability.

"Why don’t we go for a week to Crimea, to catch some sun?" I ask my wife one day. We decide to drive down to Kerch and then take a ferry to Crimea instead of wasting time on the border and traveling through Ukraine's southeast, where the situation remains tense. Already on the way, we call our friends who have left for the same holiday home in Feodosiya slightly ahead of us. "We spent six hours in the line for the ferry," they warn us.

Waiting for the ferry

There is a huge traffic jam to get to the port. There are cars here with license plates from Moscow and the Moscow Region, Voronezh, Krasnodar, Kazan…

Some four miles from the ferry embarkation point, I kill the engine: Ahead, for as far as my eyes can see, there are rows of cars. On the side of the road, there are toilet cabins, rubbish containers; a bit further on I can see a tent selling water. The time is 5:25 p.m.

After a while, people in the line start talking to each other: There are no complaints or panic, they are just discussing everyday stuff. The women are not wasting any time either: Some have already changed and are sunbathing under the evening sun, others are playing with children, while one lady is walking her dog.

It is getting dark, and the tourists return to their cars; some are taking a nap. The road is poorly lit, so the only thing preventing you from going to sleep properly is the need to move several meters ahead every 30 or so minutes.

The time is 0:30 a.m. Everything is quiet. Even the two policemen who are guarding us are no longer chatting to each other.

By the middle of the night, I decide not to check my watch any more. Finally, after a desperate leap forward, we are at the port. We pass the road barrier and get a piece of paper certifying the length of our car. After a quick security check, we take a place in the 11th row for embarkation. While my wife is sleeping, I go the port terminal along with other drivers to get the tickets. Despite the early hour, there are long lines at the four ticket offices that are open.

Having bought the tickets, I return to the car to get some sleep. The next thing I remember is a port official knocking on the window to tell us that it is time to move on.

Some 20 minutes later we enter the Port Krym bay. After more than 11 hours of waiting for the ferry, my attention is not so acute but I see that there are neither police nor military personnel meeting us in Crimea. A port official behind a window sees that we have a ticket and waves us through so that we do not detain the others.

After the line for the ferry, I was under the impression that Crimea would be packed with tourists. Not so. The farther we drive, the more vacancy signs we see. Officially, the season begins only on June 15, which may be the reason why there are fewer people in the streets of Feodosiya than usual.

On our walk to the Ivan Aivazovsky [a Russian Romantic painter and marine artist] Picture Gallery through souvenir stalls, we see a tourist information desk offering different trips for tourists. The lady in charge, Viktoria, is concerned that there will a problem with tourists this year: "Of the six million [tourists] visiting Crimea every year, four million were Ukrainians, some 800,000 came from Russia, and there were also tourists from Poland and Belarus, who are now unlikely to return."

Having bought us a tour to Mount Karadag, I join my wife, who is checking a cosmetics display at a nearby stall. I ask the lady selling the cosmetics how her business is going and what her expectations for this summer are. Lyuda is optimistic for the future: "True, previously we had mainly Ukrainian tourists coming here. But they normally came with their own food and drink. Now, as ever, we hope for Russians. A khokhol [a slightly derogatory or jocular word for a Ukrainian] will kill for a kopeck, while Russians are a pleasure to do business with." This pensioner lady sees only good things in Crimea joining Russia: Her pension has been raised and she has not noticed a considerable rise in prices, "even water running from the tap has become cleaner; after the Dnepr water we used to get one often felt like washing again.”

On the other hand, the lady Lyuda shares her stall with disagrees. She says "things are a mess.” Both women agree on one thing: The most important thing is that a war has been avoided. It seems Vladimir Putin, who is looking at them from behind his sunglasses from a souvenir T-shirt bearing the caption "The politest man on Earth", approves…

At the Aivazovsky Picture Gallery, a young man standing in front of an 1887 painting called Volga asks the museum attendant why the ship depicted in the picture has a Russian tricolor on its mast. This may be just everyday ignorance or it may be that not everybody has yet fully comprehended what happened and why.

Vladimir, the co-owner of the holiday home where we are staying, looks at things from the business point of view. Prices have nearly doubled: on construction materials (with the exception of timber), on cigarettes, meat, bread. Out of habit, he quotes prices in hryvnia, leaving it to me to multiply them by three to get their ruble equivalents.

Vladimir and his family voted for unification with Russia and do not regret their decision - his son-in-law Alexander also believes that had Crimea not joined Russia, it would now "be going through the same things as the Donetsk and Lugansk regions are going through.”

However, they add that Crimea’s new status has given its residents some temporary difficulties. "Some friends of ours got a Moscow license plate for their car and drove to Moscow. They were stopped by traffic police and it turned out that the license plate was not yet in the database,” says Vladimir.

“The police wanted to take their car to a pound, but they managed to prove that they were from Crimea, although it turned out that the numbers of the Russian passports they had been issued with were not in the system either. It is if we are living in a non-existent country,” Vladimir smiles. “But the main thing now is to build the Kerch bridge."

Read more: The Island of freedom: Crimea in Russian literature>>>