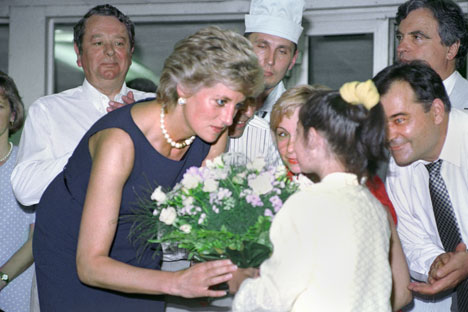 Diana during her visit in Moscow (at Tushinskaya hospital). Source: ITAR-TASS

Diana, Princess of Wales, would have turned 53 on July 1, had she survived the car crash in Paris in 1997 that took her life at just 36. Diana visited Moscow for the only time in June 1995. RBTH recalls the visit and marks the anniversary of her birth by asking how Russians viewed the mother of Britain’s future king.

Vladimir Mashanin was the only press photographer allowed to take pictures of Diana at Tushinskaya hospital in Moscow, as he recalls in an article in Novie Izvestiya. She went to the children’s hospital, which her charitable work had previously supplied with medical equipment, and then to Primary School 751 where she opened a branch of the “Waverly House” relief fund for assistance to disabled children. Later on June 16, Diana was presented with the Leonardo Award in the Russian capital.

Mashanin remembers her as a tall and very charming woman: “For me, as a photographer, it was a great pleasure to meet the eyes of Diana while she was greeting the nurses, dreaming about eye contact with the Princess.” All the formal rituals of the meeting in the hospital were broken, says Mashanin: at the entrance to the hospital, a small guy interrupted the official procession to seek an autograph, Diana didn’t meet any of the heads of the hospital, but stayed longer with the kids, played with them on her knees and “still lady Diana was higher than anyone,” says Vladimir.

Russians are quite familiar with the Princess of Wales’s life story, especially those who remember the morning newspaper headlines on September 1 1997, the day after her car crashed in Paris. The leading Russian newspaper Kommersant compared the death of the nation’s favourite, and a beautiful woman, with the murder of President Kennedy, saying that Diana was loved by both public and press.

Kommersant asked some famous Russians what the death of the Princess meant for them. Galina Starovoitova, a deputy in the State Duma, whose life was also ended by a gunman a year after Diana died, said: “I’ve seen Princess Diana and spoke a little to her at one of the routes in England. That charming woman only began to live and got to know her human abilities because of her cheating husband, which caused neurosis and an insecurity complex in spite of her English beauty. Only in the final months did she have a chance to start life again and that beginning tells us that she would dedicate her life to the people. This ridiculous death is so offensive.”

The Russian rival to Facebook, Vkontakte, has a group dedicated to the Princess which numbers more than 6,000 members. Svetlana Efremova reports that she saw Diana herself: “I was walking around School 751 with my son when some kids told me that Princess Diana was coming to their school. At first I didn’t believe it but decided to go.”

Then, she says that the place was cleaned and the road framed with ribbons. Svetlana waited a while and then Diana herself appeared: “She was thin, in a light dress, right from the stairs she went to the people. One of the old ladies gave her a present for happiness.” She recalls that there was no arrogance about Diana, saying: “It didn’t seem that she was a Princess, it was easy with her.”

Group members say that for most of them Princess Diana seemed “like a light in the darkness” and they will never forget her.

A great number of books, songs and films have been dedicated to Princess Diana in Russia. Rock-band Akvarium (Aquarium) which is well-known for reflecting the situation in the world in their work, responded to Diana’s death by dedicating the song 4D (Last day of August) to her. The song described in a metaphoric way the catastrophe in Paris in lines such as “she spent more than you can dream, // She gave up everything”. The leader of the band later told an interviewer at Radio Svoboda that “this album is dedicated to the sacredness of women and all the songs are about that or about what's going on if there is no woman.” The song 4D fitted the last description, the woman had gone and “from now on, her blood will clean mildew, // The white colour of the first day of September”.

Princess Diana was a real princess of hearts. A biography of her by Dmitri Medvedev (no relation to the Prime Minister of Russia), who also wrote biographies of Margaret Thatcher and Winston Churchill, described her as one of the most beautiful and tragic women of recent decades. Medvedev wrote: “For 32 years since the death of Winston Churchill, the British had never united in grief that much.”

Although the Princess of Wales was at the centre of many scandals connected with her cheating husband Prince Charles, or with other problems in the royal family, and despite the fact that she was a favourite cover story for the yellow press, which followed every detail of her life, many Russians simply remember her as the Queen of Hearts.