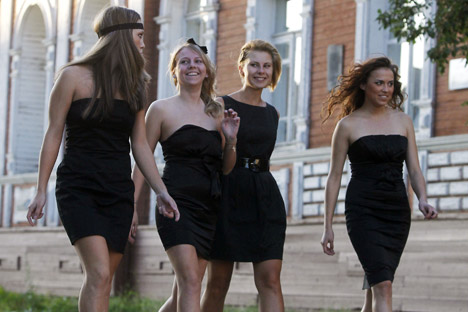 RIR tracks the evolution of haircuts from the USSR to the present day. Source: Alexey Kudenko / RIA Novosti

"With today's lifestyle a young lady does not even have an hour a day to dedicate to her appearance. Hairstyles, makeup, clothes - everything must be easily taken care of. That is why hairstyles today are very simple and natural," says Christine Pogosyan, art stylist and hairdresser from the Alexander Todchuk Beauty Salon in Moscow.

Nevertheless, trends appear every season and Russian women try hard to follow them. "In this case there are several factors: Hairstyles are influenced by fashions in clothing, lifestyles and even historical events that society is going through at the particular moment," Christine continues.

In paintings from the 18th and 19th centuries, fashionable ladies are invariably depicted with enormous structures on their heads. Back then it was popular to wear several wigs and have a very high bouffant. This style, in fact, was an international trend and it was only in the 20th century, after the October Revolution and the appearance of the Iron Curtain, that the USSR began to develop its own hairstyles and hairdressing.

"The Soviet epoch was obviously not as extravagant and substantial in terms of hairstyles as the 18th and 19th centuries, but haircuts did occasionally produce a shocking effect," says Irina Savelyova, an art historian and instructor at the Institute of Fashion, Design and Technology. "I witnessed the evolution of fashion in the 1950s and can say that all those ‘babettes’ and bouffants were ridiculous rather than beautiful."

Soviet people had an ambiguous approach to fashion. Fashion was considered to be a "bourgeois thing," and if a woman looked stylish, it meant that she was not working and spent all her time in front of the mirror. Monotonous hairstyles in the form of conifer cones held back with hairpins and other devices, as well as short haircuts, were the favorites of Soviet women.

"And yet," Savelyova continues, "you can't really say that the Soviet authorities completely prohibited taking care of your appearance. On the contrary, it was in the 1930s that the first beauty salons opened, hairstyles became more feminine and people felt the taste of life."

"The main trendsetter in the Soviet Union was cinema. These were naïve films, which often had nothing in common with reality. But they taught the Soviet men and women to dress well and cut their hair according to the latest fashions," Savelyova explains.

The female generation of the 30s and 40s chose Lyubov Orlova as its idol. She was a famous theater and cinema actress, a singer and winner of two Stalin prizes. Her portrait was printed on Soviet stamps and postcards, and many Soviet women imitated her style. She was the first to introduce hair bleaching and high, bulky styling in the USSR.

In the 50s the country discovered a new idol: Lyudmila Gurchenko. She became famous after the film Carnival Night, thanks to which a new look appeared in the Soviet Union, one that harked back to the American pin-up girls. These new phenomena engendered new hairstyles, such as those with the use of gel, which smoothened the hair.

It was during those years that the Stilyagi (the original "hipsters") appeared in the USSR. They were immediately labeled as victims of the West's pernicious influence and were therefore socially dangerous.

"Roundups were carried out on all streets of cities and those with the wrong hairstyle could be taken to the police precinct, where their ideologically detested quiff would be shaven off," says Savelyova. Girls in the Stilyagi movement had incredible bouffants or short haircuts that were arranged in a fantastic dishevelled mess, which Soviet satirical magazines called "I'm my mother's fool."

In the 1960s Soviet morality promoted moderation and minimalism in everything. Short hairstyles resembling that of Edita Piekha, a Soviet singer of Polish origin, became very popular. Dyeing hair became trendy, only this time it was fashionable to color it with henna and indigo dye. These were the cheapest and most accessible natural hair dyes. It was impossible to find artificial dyes at that time, and if they could be found, they cost too much.

From hippies to haystacks

In the 1970s the first hippies appeared in the country. They did not take care of their appearance, did not cut their hair and preferred a light creative mess on their heads. But by the mid-70s, bleaching and the platinum blonde had once again become popular. The trend was set by the film The Diamond Arm, directed by Leonid Gaidai, in which actress Svetlana Svetlichnaya played the cunning seductress, Anna Sergeyevna.

"This look became fashionable again in the beginning of the 2000s. Many girls asked me to dye their hair cold blonde," comments Christine Pogosyan.

Haircuts in the 1980s resembled haystacks. Highlights, bouffants, waves - not only girls did this to their hair, but men as well - at times, all three procedures simultaneously. Women had no mercy on their hair in their quest to obtain maximum volume and had it permed, something that needed to be repeated in a salon every six months.

It is possible that all these fads will once again be popular. "Fashion is cyclical," says Savelyova. "Its evolution is like a spiral and every 10 years or so something from the past again becomes a trend. The only difference between contemporary fashion and that of the 20th century is that now the period between these bursts of trendsetting has been shortened."

For the last two or three years women all over the world have been sticking to one rule – the simpler, the more natural and romantic, the better. And yet just five years ago Russian women were fixated only on Western pop stars – a black bob like Rhianna’s, highlights à la Jennifer Anniston or a fashionable asymmetric bob like the one sported by Victoria Beckham were the most popular trends among Russia’s chic young things.