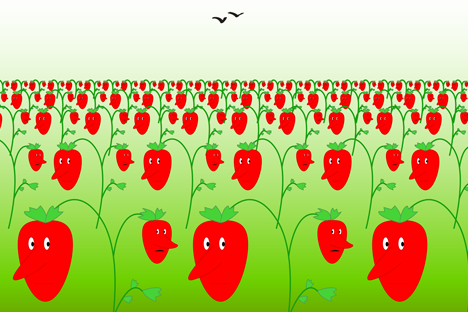 Since it’s summer in Russia, let’s talk about the double meanings that can often be found in the names of fruits and vegetable.

The berries with the most positive connotation in the Russian language are the raspberry and the cherry. When life is good, Russians say: "It's a raspberry of a life" (Ne zhizn, a malina, не жизнь, а малина). Whereas an unexpected impressive conclusion to something is often described as "the cherry on top" (vishenka na torte, вишенка на торте).

The word ‘cranberry’ is used to denote boastful and implausible tales, cock-and-bull stories. The expression razvesistaya klyukva (развесистая клюква, literally ‘drooping cranberry’) means blatant propaganda. One of the Russian equivalents of the expression “birds of a feather”, especially when used derogatively, is odnogo polya yagoda (одного поля ягода, berries from the same field).

When a place is packed with people, you can say yabloku negdye upast (яблоку негде упасть, there isn’t room for an apple to fall). The expression “apple of discord”, which originates in Greek mythology, is used in Russian too (yabloko razdora, яблоко раздора). Meanwhile, the pear features in a traditional children's riddle: Visit grusha – nelzya skushat  (Висит груша – нельзя скушать, There is a pear hanging, but you can't eat it). The answer is an electric bulb, although these days light bulbs often come in shapes other than that of a pear.

Pineapples have for a long time been a symbol of luxury: It is as such that they feature in two famous lines from early 20th century poetry that have become memes of sorts. One, by Igor Severyanin, welcomes the luxury: "Pineapples in champagne! Pineapples in champagne! I'm in something from Norway! I'm in something from Spain!" Vladimir Mayakovsky, on the contrary, rejects the fruit with proletarian zeal: "Eat pineapples, chew on quail. Your last day is coming, bourgeois!"

As for bananas, they developed their figurative meaning closer to the end of the 20th century. At school, the word ‘banana’ (банан) was used to denote a bad grade. For a while in the 1980s, it was also used to describe a trouser style that was fashionable at the time.

Pumpkin and turnip are often used in Russian in the meaning of the head. If somebody hits you on the head, you could say that you have poluchil po tykve (получил по тыкве, received one to the pumpkin). The expression chesat repu (чесать репу, to scratch the turnip), meanwhile, means to think hard to try and resolve a complex problem. In another, older, meaning, a turnip stood for something simple, elementary, and primitive. Hence the expression proshche parenoi repi (проще пареной репы, simpler than boiled turnip).

The word for ‘cabbage’ (капуста, kapusta) is a slang word for money in Russian. Cabbage also features in the phrase that is used to explain to small children where babies come from (they are found in a cabbage patch). Carrot is used in the same sense that it has in the English expression “carrot and stick”, i.e. an incentive or lure for somebody to do something (pokazat morkovku, показать морковку; or draznit morkovkoi, дразнить морковкой), although the expression itself is different in Russian. Onion features in the expression gore lukovoe (горе луковое), denoting somebody who is unlucky, clumsy, disorganized. The word ‘potato’ is used to describe a bulbous nose (nos kartoshkoi, нос картошкой).

Corn is present in the word kukuruznik (кукурузник), denoting a light agricultural aircraft. The same word was used as a jocular name for 1960s Soviet leader Nikita Khrushchev, who saw corn as a solution to the country’s food problem and initiated a campaign of sowing corn all over the country (a popular slogan of the time was: "Corn is the queen of the fields").

Horseradish features in quite a few fixed expressions in Russian, all of them slightly rude. An elderly man could disrespectfully be called a stariy khren (старый хрен). The slang expression ni khrena net (ни хрена нет) means: “There’s nothing there at all”. The exclamation khren tebe! (хрен тебе!) means: “You'll get nothing”; whereas the expression nikhrena sebe (ни хрена себе!) has a completely different meaning: It is used to express surprise, like: “My goodness!” Young people often use the word ‘pepper’, for example, a krutoi perets (крутой перец) is an attractive young man.

Peas feature in several fixed phrases too. For example, the Russian equivalent of the expression: “You might as well talk to a brick wall” is kak ob stenku gorokh (как об стенку горох). Peas are also somewhat mysteriously present in the phrase shut gorokhoviy (шут гороховый), which is used to describe somebody whom you consider to be a buffoon. If you want to stress that something happened a very long time ago, you can say that it happened pri Tsare Gorokhe (при царе Горохе, ‘during the reign of Tsar Pea’).

So, have plenty of raspberry and do take care of your pumpkins!