Reason to get your knickers in a twist: Underwear in the Soviet Union 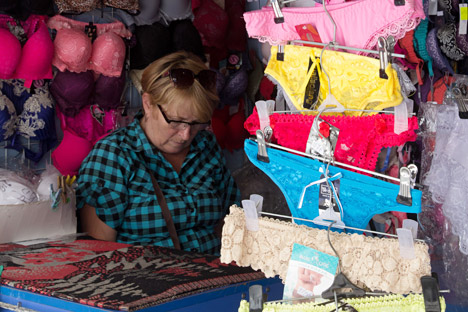 In Russia, a ban on the production and sale of several types of laced undergarments has come into effect. RBTH recalls the complex relationship Soviet people had with underwear and explains just what is harmful about the now-forbidden synthetic garments.

On July 1, a ban on the manufacture and sale of several types of lace undergarments came into force across Russia, causing widespread indignation among producers, retailers and customers alike. Many people have indignantly accused the country’s lawmakers of being out of touch and of returning Russia to the days of the USSR, when it was almost impossible to obtain quality undergarments.

In point of fact, the law does not actually ban underpants, as was reported by the more impressionable part of the blogosphere. The law simply establishes safety requirements, stipulating that the level of hygroscopicity (or water absorbency) in garments should be no less than 6 percent, while most synthetic garments reach little more than 3 percent.

“In synthetic undergarments nothing can breathe. It's just like wearing a cellophane bag!” That was Yelena Uvarova's pronouncement on Snob magazine’s online portal, sharing her opinion as a professor of obstetrics, gynecology, perinatology, and reproduction at one of Russia's largest medical schools. She also notes that the government should seek to educate on this matter, not prohibit. Ideally, each person should make this decision for his or herself. “This law is an impermissible invasion into our private lives,” writes dermatologist Darya Baskova, also on Snob.

Memories of what Soviet citizens wore under their clothes are simultaneously comic and tragic. On the television program Hidden Beauty, well known artist Renata Litvinova lamented: “The history of Russian underwear is a story of how people's lives were abased for the sake of state politics.”

It was thought that the builders of communism had no time for silliness like pretty underwear. Communism and panties are mutually exclusive! In her work Underwear in Soviet Culture as a Private Object, sociologist Olga Gurova notes that the basic demand was for garments that were “decent,” as they put it at the time. That concept was understood in a peculiar way. “By 'decent,' they mean that it approximates the size and color that suits you,” explains Gurova, who was born in 1950. And that's it. After all, quality and a lack of threats to your health are much more important.

According to the Soviet canon, the ideal woman was portly and muscular, with a substantial waistline and thighs. A large bust was also needed for feeding the many future builders of communism, but as breasts they lacked any kind of sexual symbolism. The idea of paying any attention to sexy feminine lingerie, much less men's underpants, never occurred to anyone. Herbert Wells recalls a time in 1921, when one holiday evening in Petrograd a writer yelled at him: “Not one of those present would dare unbutton this vest here before you, for underneath it are nothing but those dirty rags which, if I am not mistaken, used to be called underwear.”

For foreigners, Soviet underwear became a symbol of abnormality and ugliness. “In 1958, my friends from France, Yves Montand and Simone Signoret, visited the USSR,” Renata Litvinova relates. “During their tour they bought themselves Soviet underwear: knee-length drawers, brown cotton stockings, parachute bras. All this they took away with them to France and put on an exhibition, at which French women fainted.”

First they will ban boxer briefs, then everything else

However, weak attempts to change the situation arose from time to time. In 1954, Yekaterina Furtseva - the only representative of the weaker sex to serve in government at that moment –pronounced: “Every Soviet woman has the right to a high-quality brassiere.”

And so quality (more or less) bras appeared in domestic production, but proved to be oh so very unattractive. By the end of the 1960s, East Germany had begun to supply Russia with lacy panties and slips. Some women, having decided that the unfamiliar garments were dresses, wore the slips in public and sometimes even to the theater.

Everything changed after the fall of the Soviet Union. Imported intimate accessories appeared on the shelves in all kinds and sizes. Boutiques and sex shops opened, selling underwear for all tastes and price categories.

Over 20 years of post-Soviet existence, Russia has become accustomed to this abundance. Therefore, the current fears are only natural. Will all this really be no more? Is the era of plenty really over? Who really wants to return to the time of Soviet shortages, even for the sake of hygiene and through the good intentions of Russian lawmakers?

First they will take away the boxer briefs, and then everything else. Any prohibition is first and foremost a limit on freedom for those who can remember the era when freedom was absent. Even concerning such trivia as briefs.

Read more: Scent of a Soviet woman: The fragrances of a bygone era>>>