Bolshoi dancers: Ballet is the art of overcoming oneself 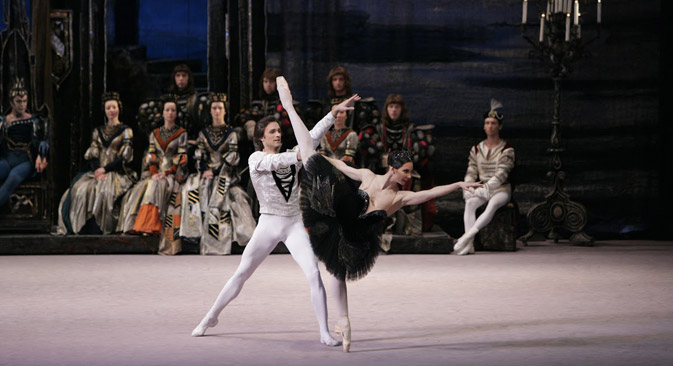 As the Bolshoi wraps up its two-week engagement at New York’s Lincoln Center, Diana Bruk of RBTH spoke with dancers Anna Tikhomirova, Maria Vinogradova and Denis Medvedev about their time in New York, the difficulties of performing night after night, and what drew them to the ballet.

RBTH: Is this your first time in New York? What are your impressions of it and America in general?

Anna Tikhomirova: It’s my second time here, and it’s left a huge impression on me. We went on a boat tour to the Statue of Liberty yesterday. I thought it would be much bigger! But, still, it’s incredible how many people and how many different nationalities live here. I like Central Park best; we don’t have enough greenery in Moscow.

Maria Vinogradova: We’ve had so much work to do, we’ve hardly had a chance to look around, but it’s a very interesting city with many different nationalities.

RBTH: How does performing on stage here at Lincoln Center compare to performing at other venues around the world?

Bolshoi announces plans for new season ahead of U.S. tour

A.T.: The public here is so warm. They’re not afraid of clapping their hands loudly, whistling, shouting, expressing their emotions. They come backstage and hand you flowers and tell you how they’ve come all the way from San Diego to see Russian ballet. It’s really heartwarming.

M.V. : The public in New York is incredible. You can really feel their energy, and as a result it’s really easy to perform here.

Denis Medvedev: The most noticeable thing is how welcoming the public here is. Their awe is really invigorating. And the shows are totally sold out, we can’t even get tickets for our friends here. I think that since we haven’t been here since 2005, it’s a sign that people really miss classical Russian ballet.

Why do you think the Bolshoi Ballet is so internationally revered?

A.T.: I think it’s managed to retain its reputation from the Golden Age. We have a wonderful group and a great repertoire. And the standards for the dancers are still very high.

D.M.: Well, the Bolshoi blends the Italian, French, and Russian schools of ballet, so it’s all of the very best. And the instructors are excellent. They really instill a sense of discipline, which is important for ballet. They’re perfectly comfortable moving your foot into the proper position themselves if you’re not doing it right, and if you don’t like that, you can pack your bags and leave.

Do you think the American approach to ballet dancing differs at all from the Russian? For example, are there any misunderstandings with [American Bolshoi dancer] David Hallberg due to cultural differences?

A.T.: Not at all. He’s a great person and he really blended in with our troupe. I think artists have their own language - an international ballet language.

M.V.: He’s a very open and positive person. I think that when people are kind, cultural differences don’t matter so much.

D.M.: If he continues in the same spirit in which he started, everything will be great. We’ve had lots of foreigners over the years, and what really matters is the person. If a dancer thinks he’s a star who has nothing left to learn, that doesn’t have good results, but David isn’t like that.

RBTH: I was elated to hear that tickets to the Bolshoi were totally sold out. Did you worry that the current political tensions between America and Russia were going to affect sales, and have they affected your time here in any way?

A.T.: No, I’m very happy to say that there were no problems at all, because I’ve always believed that culture shouldn’t have to pay for politics. What happens in politics shouldn’t affect regular people or culture. Artists, after all, exist to bring goodness into the world.

RBTH: What are the biggest challenges of performing on stage? For example, I can’t imagine how you dance in such ornate, tight costumes.

A.T.:: That’s the real beauty of these costumes. From far away, they look so beautiful and decorative, but if you see them up close, they’re like little rags.

Otherwise, of course dancing ballet is hard, that’s why I always say that 90 percent of success is hard work. And you hardly have any time for a personal life. You need to give yourself over to the art entirely, so you need to love it.

M.V.: Before you go out on stage, you’re always really nervous and that gives you a great deal of adrenaline. Then, when you’re on stage, the adrenaline ebbs away, and that’s hard because you need that energy.

D.M.: The hardest thing is overcoming yourself and not giving up. If you love what you do, you have to give it 100 percent, or even 200 percent.

RBTH: Do you diet at all?

Anna: Absolutely not, I eat everything. We especially love sweets. The idea of ballerina’s dieting is ridiculous, because we need the energy to exercise on stage.

RBTH:  what makes it worth it for you? What is it about ballet?

A.T.: It’s such an high, dramatic art form, and it’s very spiritual. It’s silent, so you need to use your body to express every emotion. Nowadays, so much of ballet is like a circus, because it’s all about high jumps and pirouettes, when it should be about telling a story and conveying feelings. I think that’s the other reason the Bolshoi is still so revered, because it has more of a classical approach, it’s more about dramatic expression.

D.M.: You know, I always loved sports, and I think it’s for the same reason, because both of them are the art of overcoming your own physical limits.

Read more: Times of turmoil at the Bolshoi Theater>>>