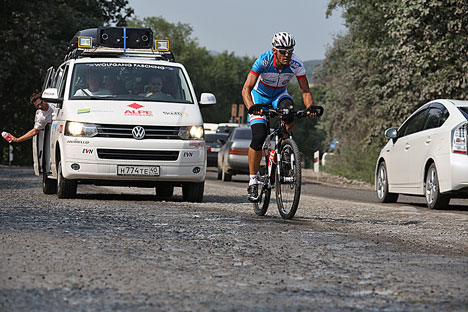 Fasching has crossed the Australian desert and won the punishing Race Across America three times, blazing from California to Maryland in little over nine days, but that, he says, doesn’t even come close to the challenge of crossing Russia. Source: Press photo

Austrian cyclist Wolfgang Fasching is attempting to traverse the whole of Russia in just 24 days. Before he set off on his arduous 6,200-mile challenge, Fasching spoke to RIR about his motivation and preparations for the epic journey as well as his fascination with Russia.

Imagine waking up and knowing that today you must cycle 280 miles.

The Austrian is taking cycling to a whole new extreme, aiming to cross Russia from coast to coast, a distance of almost 6,200 miles (10,000 kilometers) in just 24 days. That’s the equivalent of crossing America and heading straight back again, or covering this year’s Tour de France route three times over without any rest.

If Fasching falls behind on his quota one day, he must make up the difference the next day, in rain or shine, often on bad roads. Otherwise he risks failing his life’s great challenge, a record-breaking ride he has spent a year preparing for.

“To cross Russia with my own muscles, only with my bike and my support crew, from Vladivostok to St. Petersburg … I think that’s the biggest challenge in my life,” Fasching told RIR before he started his ride on Russia’s Pacific coast.

“I sleep not more than three to four hours a day and I think after 10 days the body and the muscles are very tired,” he added. “I hope I have enough spirit and can motivate myself to manage the situation.”

As I write, Fasching is 31 hours into his ride across the world’s biggest country, taking in Russia’s geographical diversity from Siberia’s endless pine forests, around the edge of the stunning Lake Baikal and through Moscow’s city streets.

Riding a bike does not prevent from being stylish

There are more than a few quirks and oddities along the way. At the time of going to press, Fasching is crossing through the city of Birobidzhan, capital of Russia’s Jewish Autonomous Region, a swampy chunk of Russia’s Far East that is the relic of an anti-Semitic Stalin-era plan to remould Russian Jews into model Soviet citizens by forcing them to carve out a new life in inhospitable territory.

Fasching is no stranger to extreme bike rides. He’s crossed the Australian desert and won the punishing Race Across America three times, blazing from California to Maryland in little over nine days, but that, he says, doesn’t even come close to the challenge of crossing Russia.

“The big difference – the Race Across America is 5000 km, and Australia is 4,200 km, and Russia is nearly 10,000 km and a change in altitude of more than 80,000 m,” he says. “The roads are not so good as in America or Australia and that’s the big challenge. There’s a lot of different weather conditions.”

He says that Russia is a “very nice country” full of “nice people,” but the main attraction for Fasching, he admits, is the nation’s sheer size. Much like a climber scaling Mount Everest, Fasching has a simple explanation for why he is putting himself through a trial many people would consider hell.

Why cross Russia? Because it’s there. 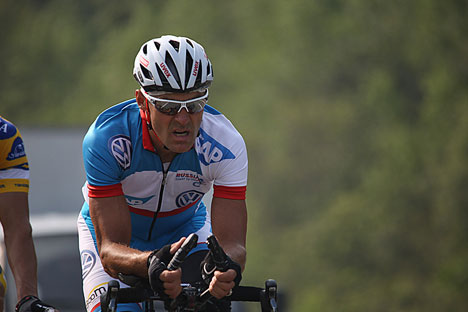 “To cross Russia with my own muscles, only with my bike and my support crew, from Vladivostok to St. Petersburg … I think that’s the biggest challenge in my life,” Fasching says. Source: Press photo

To make himself fit to manage the feat, Fasching has put himself through a gruelling training regimen and estimates he has covered 50,000 km (31,000 miles) in eight months. Keeping up the pace required to meet his 24-day target would be impossible without a support crew who travel alongside Fasching. Their van is equipped with two spare bikes, a shower and even a washing machine to ensure the 46-year-old Austrian always has a clean set of spandex. Fasching eats and drinks on the move, eating high-energy food designed to keep him stocked up as he burns calories at a fearsome rate.

Preparing for the ride has required “big mental training” as well as getting himself in shape physically, Fasching says. Luckily, he’s well prepared. Fasching’s career of record-breaking rides has made him something of an authority on mental fortitude, publishing a series of motivational books with titles such as “Life at the Limit” and “YOU can achieve what YOU want!”

Despite Fasching’s months of mental and physical preparation, anything could yet happen. With each day he takes, the minimum of sleep builds fatigue, which makes falls and injuries more likely. Crossing Siberia in the summer means avoiding the threat of sunstroke and coping with clouds of mosquitoes.

Nevertheless, Fasching is stoic about the difficulties ahead: “It’s the ultimate challenge. I hope it has a happy end,” he says.