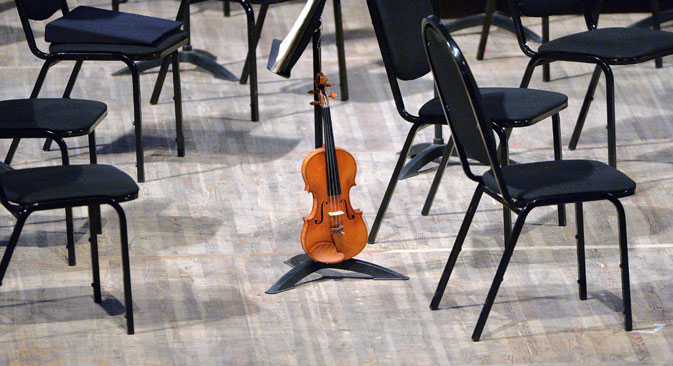 The Russian Embassy in London said that it was aware that UK government officials were refusing to take part in events related to the Year of Culture. Source: Vladimir Pesnya / RIA Novosti

The British Government has cancelled its involvement in the UK-Russian Year of Culture, the British Embassy in Moscow confirmed. However, the British Council will continue to oversee the UK programme in Russia. Earlier, Scotland’s Herald newspaper reported that the British and Scottish governments had withdrawn their support for the year-long programme of cultural exchanges with Russia over the events in Ukraine.

The political crisis over Ukraine has prompted ministers in London and Edinburgh to boycott the remainder of the UK-Russia Year of Culture, a celebration of the arts, education, sport and science that involves more than 250 events in both countries.

Most of the major events have already taken place. Of the eight British theatre companies scheduled to perform in Russia, seven have already visited, and five of the six regional projects have already been completed.

Opus No.7 by Krymov to be performed in London

Coming up in the UK are Dmitriy Krymov’s rendition of Shakespeare’s “A Midsummer Night’s Dream” at the Barbican, and the world premiere of a joint Russian-Scottish production of “The War” at the Edinburgh Festival. Ironically, the play directed by Vladimir Pankov explores the deep psychological and physical impact of conflict between states on culture and the arts, and how we can help provide a vision for the future through art.

Organisers and performers hope that the absence of ministers will not affect attendances at the show.

Actually, ‘there has been no UK ministerial or senior official attendance at the Year of Culture events since March”, Paul de Quincey, Director of the British Council in Russia told RBTH. “The Year of Culture events have, however, taken place and will continue to take place according to the programme. It is important that we maintain the people-to-people cultural contact.’

Indeed, when governments struggle to communicate in a cultured way they should artists, poets and museum curators a chance to restore sanity in international affairs.

This was true 90 years ago when Anglo-Soviet diplomatic relations, established in 1924, almost immediately fell foul to British party politics. It was against this background that the Society for Cultural Relations between the Peoples of the British Commonwealth and the USSR was established in London in the same year. It was founded by the likes of Virginia Wolf, Maynard Keynes and Bertrand Russell with a remit to keep cultural, educational and artistic links with Russia going even at a time of political disagreement, says Charles Stewart, vice chairman of what is now The Society for Co-operation in Russian and Soviet Studies (SCRSS).

“The most important thing is that the events (of the UK-Russia Year of Culture) continue”, he told RBTH. “It’s a negative development that ministerial and senior official support has been withdrawn. We believe that cultural and educational exchange should be supported at all levels. But I think that such exchange is not entirely dependent on official support. I think there will be continued grass roots support for educational and cultural exchange.”

Such exchanges are primarily for the benefit of ordinary people in Britain and Russia, says Anton Chesnokov, UK Representative of Rossotrudnichestvo, a Russian body that promotes cultural, educational and artistic links with the world. He is is not formally responsible for the Year of Russian Culture in the UK, since he has a much longer-term remit of supporting cultural and wider humanitarian ties between the people of the two countries. Lack of official backing from one side will make these grass-root exchanges even more important and valuable, Mr. Chesnokov told RBTH.

One Russian participant in the UK-Russia Year of Culture is the Russkiy Mir (Russian World) Foundation, set up to promote the Russian language around the world. Aleksey Gromyko, head of its European programmes, told RBTH that he doubted the absence of politicians would make a cultural event less important. “Some politicians,” he quipped, “have come to believe that politics should dominate all other spheres of life. Suppose actors refuse to perform because they have spotted a politician in the audience.”

The Russian Embassy in London said that it was aware that UK government officials were refusing to take part in events related to the Year of Culture. However, a spokesman said: “We do not have any information that the UK government stands for the termination of the Year of Culture. Thus, all the concerts, exhibitions and other cultural events are held in London at the level of public, which is still highly interested in promoting cultural exchanges between our two countries.”

Jenny Carr, chairperson of the Scotland-Russia Forum in Edinburgh, said that there would be several events from Russia and about Russia at the Edinburgh Festival. She added: “Cultural exchange is very important in times of political disagreement: it helps understanding of the roots of political behaviour and is a vital channel of communication.”