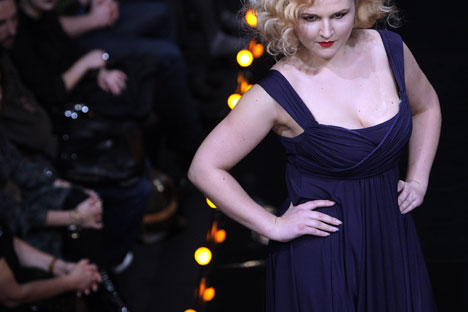 Aspiring models in Russia are strictly judged on their figures, and those of heavier build are typically obligated to discard their dreams of the catwalk. Marina Starodubtseva spoke to a woman who has made a successful career out of plus-size modeling in Russia.

The modeling industry in Russia and throughout the world continues to close its doors to women who do not meet its standard of beauty. Girls who aspire to become models have to commit themselves to dieting, or else forget about a modeling career.

However, Dilyara Larina has found a solution. Larina has been promoting plus-size models and has written a book on the subject called Living in a Non-Standard Body. She has also opened her own modeling agency, called Plus-Size Model Agency.

It all started when Larina found herself trying to lose weight to maintain her relationship with her boyfriend. She eventually reached her goal and showed up to one of her dates wearing a tight, figure-hugging outfit that made quite the impression.

Nonetheless, the couple broke up in the end. The episode brought Larina to the realization that you have to be faithful to yourself and your own body, paving the way for her to embark on a career as a plus-size model.

How to destroy fashion stereotypes

According to the national research center Healthy Eating, almost 59 percent of Russian women are overweight. The imposition of model beauty standards on everyday Russians is a multi-million dollar industry. One reason for this has to do with retail stores themselves and the lack of variety when it comes to size.

"You come into a store, and the plus-size collection is tucked away in the back corner. Designers adorn mannequins with larger garments, but not to promote the normalcy of needing a larger size, but so that the clothes fit the models loosely. The message it sends is, ‘It’s your body, you can throw whatever you like on it,’" Larina explains, outraged.

Ideals imposed by society are difficult to change. Katalina Gorskikh, a plus-size model from St. Petersburg, said that the best way to break down stereotypes is to lead by example and show that you can lead a very full life, even as someone with a large figure.

"With a full-sized model, you can really create an unusual image; you are attracted to it out of an ancient instinct. A thin model, on the other hand, just evokes a desire to feed the person," a popular Russian photographer using the psudeonym Beliy Den told the Rossiya TV channel.

Being plus-size in the fashion world

The world of high fashion accepts plus-size models with reluctance. Those who walk the catwalk or appear in the top glossy magazines are the exception rather than the rule. "We are the freaks of the fashion industry. There’s no alternative," Larina says.

"One senses that in Europe, the designers do not ever go outside, where they would see real women, women who are a size 50. We strive to represent the women who are the potential customers of the products that we promote," Larina says.

In trying prove to society that there is a place for them in the fashion world, the ladies employ their favorite method. "I am the organizer of a beauty contest for plus-size women called Northern Aurora. I lead workshops in St. Petersburg and Moscow, and in 2011, I won the La Donna Dolce beauty contest,” says Alexandra Shcherbakova, a plus-size model from St. Petersburg.

The main task of these girls is to achieve equal rights for all when it comes to beauty. Participating in photo shoots helps build self-confidence and freedom from complexes. It allows them to break down the stereotypes of female beauty.

"I am not worried about this being a difficult path. I do not want to go to another country where it might be easier,” Larina insists. “I want to dig deeper here and change what I do not like.

“I do not get angry at our backwardness; I just press forward and work hard. Anyway, given the number of fans I have from other countries, I think I’m doing pretty well.”