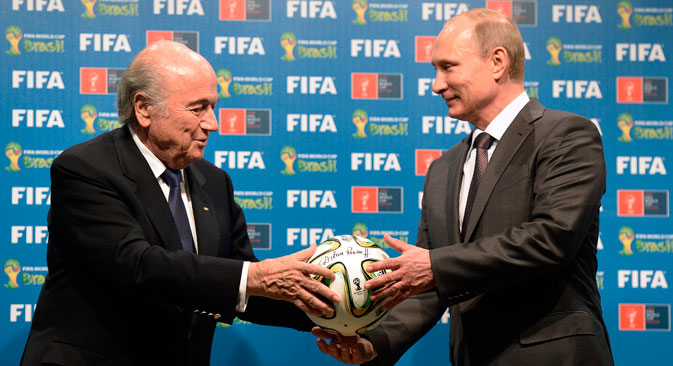 Several high-ranking officials in Europe are encouraging the idea of stripping Russia of its right to host the World Cup in 2018, but FIFA insists that the championship will be held on Russian soil.

The fervour surrounding the 2014 World Cup did not cool off before the general public started to talk about the next World Cup, which will take place in Russia. However, the controversy has not been about the sporting elements of the tournament. A number of Western politicians are calling for depriving Russia of its status as World Cup host country because of its policy towards Ukraine.

Football as an integral part of sanctions

Statements made in March by U.S. Republican Senators Mark Kirk and Dan Coats about excluding the Russian national team from the 2014 World Cup because of the Crimea reunification were not taken seriously. However, the situation has now escalated to a fever pitch. Senior officials are calling on stripping Russia of its right to hold the first World Cup in its history.

British Deputy Prime Minister Nick Clegg urged stricter sanctions against Moscow. He said it would be “unthinkable” to give Moscow the opportunity to enjoy the prestige of the World Cup. Clegg believes that Russia’s behaviour has crossed the line, and that if it is allowed to hold the tournament, the rest of the world will show that it is weak and hypocritical.

Clegg was supported by the leader of the ruling centre-right coalition in the German parliament, Michael Fuchs. Stripping Russia of its right to host the World Cup would impact it much more than sanctions, the politician told the German newspaper Handelsblatt Online.

A number of soccer fans have expressed concern about the World Cup venues. The former coach of the Netherlands national team, John van't Schip, has called for a boycott of the World Cup if it is held in Russia. “I appeal to the Royal Netherlands Football Union, the country's government, and FIFA: boycott the World Cup in Russia,” van't Schip he wrote his Twitter account. The tweet was accompanied by the hashtag #MH17 – the number of the Malaysian Airlines flight that crashed in Ukraine en route from Amsterdam to Kuala Lumpur on July 17.

However, these arguments have not convinced FIFA officials. In their official statement, the organization’s representatives stated that boycotting sporting events, as well as policies of isolation and confrontation, are not the most effective methods for solving problems. “The World Cup brings together teams and countries from around the world,” the statement read. The organization is certain that the World Cup will be held on Russian soil.

Russia's Sports Minister Vitaly Mutko advised against responding to politicians’ harsh statements. “The  1980 Olympics in Moscow were boycotted. Then everyone agreed that it was a mistake. Therefore, it makes no sense to respond to statements by politicians who make a name for themselves by doing this,” Mutko said.

First Vice-President of the Russian Football Union (RFU) and European champion Nikita Simonyan takes a similar position: “The main goal of the World Cup is to unite all member countries. The tournament is held under the slogan ‘fair play,’” Simonyan said. “Why make such harsh statements? The World Cup is a celebration of football, not an arena for political discourse.”

He added that before the 2014 World Cup in Brazil, critics argued that the country’s infrastructure was not ready to handle the event, and because of street crime, spectators from around the world would not go to South America.  Despite that, “the 2014 World Cup was the most visited in the history of the tournament, and there is no doubt about the quality of the stadiums,” Simonyan told RIR.

Honorary President of the RFU and former Vice President of FIFA (1980-1996) Vyacheslav Koloskov told RIR that the Russian authorities have secured the support of FIFA’s leadership. “The 2018 World Cup will be held in Russia without a doubt,” Koloskov said. “We discussed the situation with Valcke (FIFA Secretary General) and Blatter (president of FIFA). They support us in the current situation. Everyone in FIFA has an interest in keeping the events in Ukraine from getting in the way of organizing the World Cup. We are intensively preparing ourselves to host the World Cup. We are constructing the necessary infrastructure, including stadiums, bases, and hotels. Maybe a little behind schedule, but I am sure we will manage to get everything done in time.” He added that no team has yet decided to boycott the next World Cup.