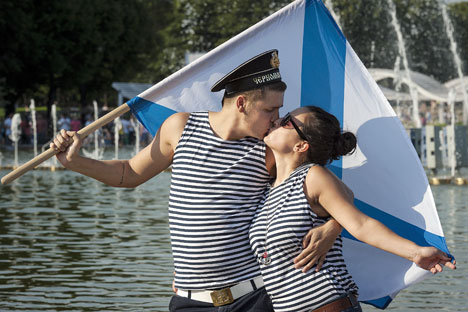 The striped vest, or telnyashka, has a long association with Russia’s Navy. Source: ITAR-TASS

A hundred and forty years ago, in 1874, an imperial degree gave the striped jersey official status as part of the Russian sailor’s uniform. The Western world calls this element of the wardrobe the Breton shirt, while the Russians call it a telnyashka.

Today the striped vest or jersey is instantly recognizable in Russia as a symbol of the Navy, as well as being worn by paratroopers and a host of other special forces. Yet the telnyashka, as it is known in Russian, was one of many foreign imports that appeared in the country in the 19th century and eventually became institutionalized.

The Russian people first saw this type of striped vest in the second half of the 17th century, when Dutch merchant ships started coming to the towns of Kholmogory and Arkhangelsk in the White Sea. The “sea dogs” of the Netherlands, along with the British, were the main trendsetters in the field of marine accoutrements. It was thus no accident that Peter the Great made use of the Dutch naval uniform for his new Russian Navy, however, without the striped shirts. These first appeared in Russia in the 1840-50s, sported by merchant seamen, who exchanged or bought them in some European ports.

The look of Russian literature: From Pushkin's sideburns to Solzhenitsyn's chin curtain

Legend has it that in 1868, the Grand Duke and Admiral Konstantin Nikolayevich Romanov was reviewing the crew of the frigate General Admiral. At the review, all the sailors came out wearing striped shirts, which they had purchased in Europe. The seamen so praised the functionality and convenience of these striped jerseys that a few years later, in 1874, the Duke Prince asked the emperor to sign a decree formally incorporating the striped vest into the sailors’ standard outfit.

However, it was not until much later that this striped vest became a cult phenomenon, when demobilized sailors filled the Russian cities after the Russo-Japanese War of 1904-05. They danced dances such as the Yablochka (‘Apple’), recounted how they had fought for Port Arthur, and looked for things to keep them entertained. The distinguishing feature of these dashing sailors was the striped vest, which at that very time became known as the ‘sea soul’. It was then that the first mass identification of the ‘soul of the sea’ with the collective Russian soul took place.

Why did Russian paratroopers start wearing the striped vest?

The striped vest has always been associated with the element of water, but not with air. How and why did parachutists take to wearing the telnyashka? Unofficially, the ‘Breton shirt’ first appeared in the wardrobe of Russian paratroopers in 1959, when parachutists began training to jump into water. The leading advocate of the striped vest for airborne troops then became Commander of the Airborne Troops, General Vasily Margelov. Thanks to his enthusiasm, the striped sweatshirt officially entered the wardrobe of the paratroopers.

These vests with blue stripes were first officially worn during the Russian-led occupation of Czechoslovakia in August 1968 – Soviet paratroopers in striped jerseys played a decisive role in ending the Prague Spring.

There is a hypothesis that this passion for horizontal bands was born in the USSR’s chief paratrooper thanks to the popularity among the Soviet military elite of the 1963 British film This Sporting Life, a drama chronicling the harsh world of English rugby players. For some mysterious reason, the film became a cult among Soviet military commanders, many of whom subsequently lobbied for the creation of military rugby teams. A great impression on Margelov was produced by one of the most brutal moments in the movie, when the main character inflicts a deliberate injury on a player of the opposing team. The player of that team was dressed in a striped uniform that resembles the striped vest. Margelov himself ordered the introduction of a rugby training program for paratroopers after having seen the film.

What do all these stripes mean?

The horizontal stripes of the telnyashka create an optical effect of there being more fighters than is actually the case. Interestingly, Soviet sailors and marines who participated in the battles on the ground during World War II were referred to by the Germans as ‘striped devils’. This epithet was connected not only with the fighting qualities of the Soviet soldiers, but also with Western archetypes: In Europe, striped clothing for many centuries was the lot of ‘the damned’. It was worn by professional executioners, heretics, lepers and other outcasts of society who did not have the rights of a citizen.

Today, virtually every armed services branch in Russia has its own unique vest with stripes of various color combinations. T-shirts with black stripes are used by the marines and divers, with light green stripes – by border guards, with maroon stripes – by commandos of the internal forces of the Ministry of Internal Affairs, with cornflower blue – by soldiers of the Presidential Regiment and Special Forces of the Federal Security Service, and with orange stripes – by workers of the Ministry of Emergency Situations.