Color symbolism in the Russian language 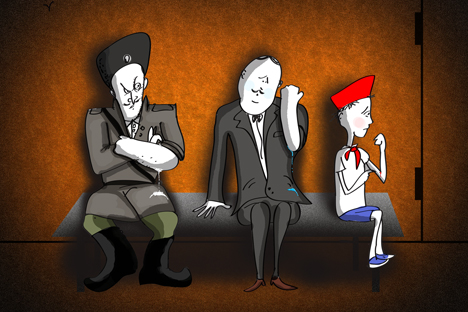 In every language, words denoting colors are associated with some additional meanings. Russian is no exception.

The brightest color in the Russian language, and the one that has most positive connotations, is the color red. The word "red" in Russian (krasny) has the same root as the word "beautiful" (krasivy), and the meanings of these two words are indeed very close.

Moscow's main square is called Red Square. Historically, it is believed the square was given that name not because of the presence of red buildings on it, but because it was considered to be beautiful. So it would have been more appropriately called not Krasnaya but Krasivaya square.

In the early 20th century the word "red" acquired a new meaning and has since then been primarily associated with communist ideology. After the Bolshevik Revolution of 1917, red became the color of the national flag, under which the country lived until 1991. In Soviet mythology, red was considered to be the color of the blood shed by the working class in their fight against the yoke of capitalism.

A Soviet person was immersed in red symbolism from their very childhood: from the age of 10 until they became 14, practically all schoolchildren were pioneers and, as a sign of belonging to that youth communist organization, had to wear (at school at least) a triangular red necktie.

After the revolution, the ideological antonym of red was the color white. It is the Red and the White armies that fought against each other in the 1918 to1920 civil war, in which the White (i.e. regular Russian) Army was defeated and driven outside the country. Its remaining representatives became known as white émigrés, while in the USSR the word "white" became synonymous with "counterrevolutionary" and "hostile."

Next to red in the rainbow spectrum sits the color orange, which also has recently acquired some ideological tinge in Russian usage. Following the so-called Orange Revolution that took place in Ukraine some 10 years ago, the word "orange" began to denote members of the liberal, pro-Western, opposition.

The word "violet" in Russian slang is used to describe utter indifference. You could say in Russian: "It's all violet to me," meaning: I couldn't care less.

However, it is the word "blue" that has developed diverse and sometimes quite unexpected associations in the Russian language. Traditionally, this color was a symbol of noble birth and the expression "blue-blooded" was used to describe members of the aristocracy.

In Soviet times, especially in the 1960s, blue became associated with the romance and excitement of exploring and developing remote parts of the country (one of the popular songs of the time, which urged young people to join construction projects in Siberia, was called "Blue cities").

The word "blue" was also used to describe far-reaching dreams and aspirations. While the most popular TV program of the time was called "Little Blue Light" (an allusion to the real color of the black-and-white TV screen).