The Russian empire reveals its true colours in London 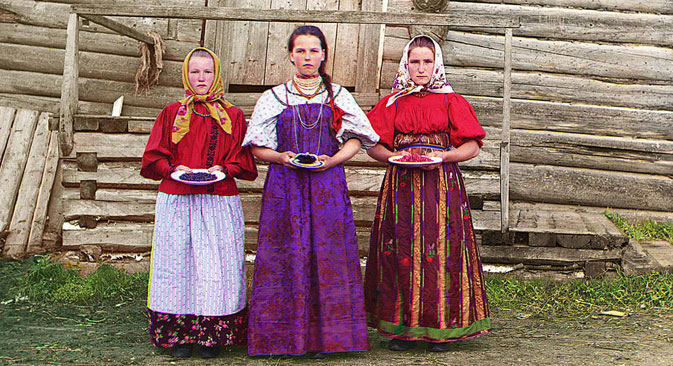 On Aug. 15, London sees the premiere of a documentary film dedicated to the 150th anniversary of Sergei Prokudin-Gorsky, one of the world’s pioneers of colour photography. RBTH correspondent investigates the photographer’s legacy and why the film is being shown in Britain.

The international premiere of the film “Colour of the Nation” by the well-known Russian journalist and television presenter Leonid Parfyenov is part of the exhibition programme “Far and Close: Russian Photography Now” at the Calvert 22 gallery in London. The show, which runs until August 17, has introduced the British public to the work of Prokudin-Gorsky – the master of the first colour photographs in Russia, who preserved authentic images of pre-revolutionary Russian empire in his work.

In long journeys around the country, carried out from 1905-1909, Prokudin-Gorsky captured on film the patriarchal Russian life. He shot panoramas of towns and countryside, old churches and monasteries, mills and factories. Thanks to him, we have unique colour portraits of Tolstoy, Chekhov and Shalyapin, his pictures of young Russian peasants, the Emir of Bukhara, sailors from the steamship “Sheksna”, factory workers are widely known. As a result of unique technology, the images of these people have survived in modern standards of quality and original, wonderfully saturated colours. “The photos of Prokudin-Gorksy are pretty much unique in the world for their more or less systematic preservation in colour of life before the First World War,” Parfyenov told RBTH.

IN PCITURES: Sergey Prokudin-Gorsky, colorful memories of the Russian Empire

“It is a document of how vivid this world was. How, for example, is the Chekhov era presented in theatres? The clothing is all dreary and plain. Yet Prokudin-Gorsky photographed a brigade of men at the Bakalsky mine in the Ural: in pink, light-green, blue and red shirts – as if they had been dressed by Sir Paul Smith.”

Master in the UK

“Prokudin-Gorsky's contribution to photography deserves to be better known in Britain and throughout the world. He was an important innovator in the photographic medium and it is surprising that his legacy was forgotten and is only now slowly being remembered,” says the exhibition’s curator Kate Bush. She points to his determination to use photography both as an expressive artistic medium and as a tool to describe and communicate to others aspects of the world around him. It is a legacy that could, in this fast-moving digital age, inspire young photographers from all nations today.

British history knows about its pioneers of colour photography, adds the curator. Like Prokudin-Gorsky, they photographed parts of their homeland and used special colour film plates. The colour of the British empire is preserved in the photographs of Francis Firth, Samuel Bourne and Felice Beato. “But Britain doesn't have a comparable figure to Prokudin-Gorsky, who united pioneering science with an acute artistic sensibility and an extraordinary drive to understand and chronicle a changed and changing world through photography,” says Bush. “He was both an artist, a visionary and a scientist.”

The traces of the past

You can become acquainted with many of Prokudin-Gorsky’s photographic masterpieces at the Calvert 22 gallery, but the film that closes the exhibition is not only about photography or even so much focused on it. Parfyenov followed in Prokudin-Gorsky’s footsteps in search of the legacy of the Russian empire. He visited 12 regions of Russia, literally comparing in the shot the old scenes on the photograph with the modern views from the same places. During his travels, the author of the film comes to a sad conclusion: throughout the Soviet years, pre-revolutionary tradition was absolutely lost. Some of the architectural monuments were destroyed, others came to be abandoned. Towns that had prospered fell into irrelevance. “The British with their cult of continuity will understand like no others what a terrible loss this was, a national tragedy,” explains the documentary film-maker.

Screenshots from the film “Colour of the Nation”

Reviving the continuity of present-day and pre-revolutionary Russia won’t work, Parfyenov believes.  You can restore the monument, he argues, but you cannot resurrect the spirit of the era, just as St Petersburg, the former capital of the empire, won’t be able to form once again the “Babylon on the 60th parallel” from its international inhabitants.

In this theory, sounding like an echo of Hamlet’s “The time is out of joint”, is concealed the critical attitude of the author towards the humanitarian values of modern Russia. However, Parfyenov’s film is not gloomy – it sparkles with the colours of Prokudin-Gorsky’s photographs and you take it all in with one go.

Find out more on RBTH special section The Kompass