Mountaineers in the First World War 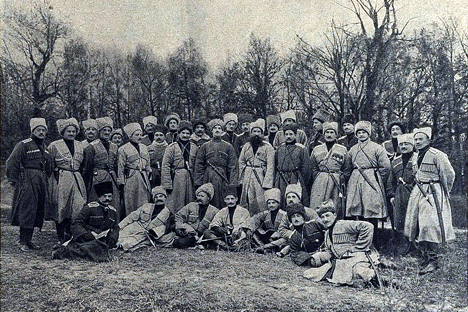 In the summer of 1914, by the order of Nicholas II, the Caucasian Native Calvary Division was formed. The so-called Wild Division’s daring fighters terrified the enemy and fought bravely in war.

The Muslims of the Russian Empire, the majority of whom lived in the Caucasus or Central Asia, were free from compulsory military service. The authorities feared arming what they termed naturally militant and potentially hostile people. It is difficult to maintain how justified these concerns were since, in the middle of the 20th century, dozens of Muslim Mountaineers served faithfully in the Tsar’s Convoy – a special unit responsible for guarding the personal safety of the emperor.

In August 1914, when an unprecedented patriotic fervour seized the country, the Caucasus Native Cavalry Division was created by the order of Nicholas II. Many young Mountaineers who had been capable of controlling a horse, staying in the saddle, and shooting without missing since childhood responded to the call of the White Tsar, as Russia’s ruler was known in the East. The dzhigits came on their own horses and in their own uniforms – Cherkess kaftans and high wool hats, with their daggers and swords. The only public expense was the rifle. The salary was 20 roubles a month.

Service in the unusual cavalry formation was voluntary. Though Muslims composed 90 percent of the personnel in the ‘Wild Division,’ soldiers and officers could be found among them who were Russian aristocrats, Baltic Germans, and even sailors from the Baltic Fleet. Meanwhile, in a collective where every other member was a haughty aristocrat, there was a complete democracy and the main yardstick was actual service in battle.

Letters from the front

Towards the end of 1914, after the personnel had received four months of training, the division was transferred to the South-West Front where heavy fighting with the Austrians was going on.

Brother to the Tsar, father to soldiers

From the moment of the formation of the division to early 1916, the Grand Duke Mikhail Alexandrovich, the brother of the last Russian Tsar, was the most famous of its commanders. An excellent cavalryman and athlete with steel fingers that could tear apart an unopened pack of cards, he enjoyed a great reputation among the mountaineers. The 35-year old adjutant-general was unpretentious and modest in daily life but did not fear appearing in the most dangerous positions.

With him, the division partook in the capture of Stanislavov (now Ivano-Frankivsk) and liberated Galicia in 1915.

Mikhail Alexandrovich, experiencing the burden of his royal ancestry, was shot on June 13, 1918. He only briefly outlived his former division, which had been disbanded earlier that same year.

The following instance can help one get an idea of what the “native” military tactics were. It is the spring of 1915, when the rivers of Galicia are barely free of ice. A hundred mountaineers clenching daggers in their teeth cross the Dniester at night to where the Austrians hold a position on the other side. They silently take out the sentries. There are trenches protected by barbed wire before them. Not having special scissors to cut them (Mountaineers see no sense in hauling around objects unnecessary for close combat), they just throw Daghestani burkas on the “thorns.” They silently creep up to the trenches and armed only with some daggers fall upon the enemy with guttural cries. The enemy retreats in a panic. Other “natives” – already on horseback – attack the fleeing; they had managed to cross the river below…

Naturally, the war was no walk in the park, even against the Kaiser’s Austrian troops who were inferior in terms of combat ability. About ten thousand soldiers and officers passed through the division over the course of the three years it was in service. Keeping in mind the permanent staffing quota of 3,450 cavalrymen, it is easy to estimate how high the percentage of losses was.

And, of course, it is completely inaccurate to imagine the mountaineers as some kind of anachronism in the unfolding “motorized war.” The Wild Division was equipped with machine guns and armoured vehicles.

The birth of legends

Notwithstanding all their heroism, the mountain horsemen who were excellent for diversionary and reconnaissance missions or dashing cavalry mounts, were not very effective in trench warfare where soldiers might remain in one and the same trench for a year.

Nevertheless, the native division became an important propaganda tool; the division instilled fear in enemies along the whole Eastern Front with just its name. In the minds of the Europeans – Germans and Austrians – was the firmly entrenched image of a savage Asian rider who knew no mercy, an image not too far removed from reality.