Clichés in speech and filler words 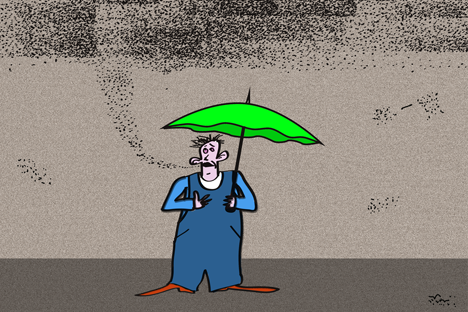 In a Russian conversation, there is a high likelihood of hearing standard turns of phrase. While some have actual meaning, others play the role of auxiliaries, supporting the flow and rhythm of speech.

In the cult Soviet film Carnival Night (1956) there is a song with the refrain, “I don’t know how to start, all in all, it means, so to say, nope, it won’t come out right again!” This timid young man tries unsuccessfully to confess his feelings to a young woman.

In his tongue-tied speech there are three very popular parasitic filler words and phrases: v obshem (в общем, “on the whole” or “in general”), znachit (значит, “it means”), and tak skazat (так сказать, “so to say”).

The turn of phrase v obshem (variants: voobshe, voobshe-to, v obshem-to) indicate the speaker’s uncertainty. He does not want to state something categorically and appeals to something ‘general’, removing from himself the responsibility (for example, v obshem, da means “more likely yes than no”).

A similar role is played by the phrase tak skazat (variant: kak govoryat, meaning “as they say”), which is a sort of verbal ‘quotation mark’ indicating that the speaker is “citing” some commonly held, well established judgment or opinion. And the word znachit is usually heard when you must say something but are at a loss for words: It simply fills the pause.

The question Kak voobshe? (Как вообще? “How are things in general?”) is a slang variant of the standard Kak dela? (Как дела? “How are you?” - literally “How are affairs?”). Eto voobshe ne variant (Это вообще не вариант, “It’s not an option all in all”) is said when one wants to completely reject some kind of proposition. Nu voobshe! (Ну вообще! “Well, really!”) expresses major surprise over some object, event, or action (the ‘concentrated’ slang version of the expression sounds like Vashe!).

The word koroche (короче, literally meaning “shorter” but translating in colloquial speech as something approximating “basically” or even “like”) is often found in the speech of young people. In general, it is used more or less logically when one speaks of something long and complicated but switches to a more laconic style to make things easier for the interlocutor.

However, when the word koroche follows a rather confusing statement, this reason does not really apply to the speaker’s use of “shorter”. Moreover, the word koroche sounds even more comical at the beginning of phrases when nothing precedes it. In this case, we come across a genuine parasitic filler word.

In an intensive dialogue, the conversers may start using the turn of phrase na samom dele (на самом деле, “actually”). The speaker is emphasizing his competence in advance (he knows how it “really is”); however, in real speech the literal semantic load of this expression has been mostly lost and this phrase is usually used as a type of standard opening for statements.

The phrase kak by (как бы, literally “as if”, but effectively the equivalent of the filler word “like” in English), which is found in the speech even of educated people who control their speech, has become extremely intrusive.

By saying kak by a person removes himself from his statement a little; he emphasizes that he cannot express his thought exactly and kak by warns of the imperfection of his speech. Some think that the phrase attests to the estrangement of modern man from reality and his avoidance of its interpretations and evaluations: That is, kak by means something along the lines of “for fun, not seriously”.

The turn of phrase po hodu (по ходу, “along the way”) has an even less determinate semantic load. It has entered into active speech relatively recently (but then again it is usually used by people with a low level of education).

This abbreviation of the phrase po hodu dela (по ходу дела), which signifies something that happens “along the way” of the basic “affair,” i.e. something that happens parallel to it. In current speech, the use of this meaning has partially remained (thus po hodu chego-to, по ходу чего-то - “during the course of something”), but the phrase is heard more and more frequently as just “speech padding” (like voobshe-to).

Nu, ty ponimaesh (Ну, ты понимаешь, “Well, you understand”) indicates the speaker’s hope that their interlocutor is fully in agreement with them, even if they did not very convincingly express their thought in words.

Prosto net slov (Просто нет слов, “There just aren’t words”) is a standard form for expressing discomfort over some event or someone’s action. Nichego ne popishesh (Ничего не попишешь, literally “You won’t write anything”) is a variant of the doomed Nichego ne podelaesh (Ничего не поделаешь, “You won’t do anything”), i.e. both phrases mean “There is nothing to be done”.

And now we have the strange and intrinsically meaningless phrase Da kakoe tam! (Да какое там!), which means something along the lines of “You were expecting something, counting on something? And totally in vain!”

The word da (yes) often has nothing in common with an expression of consent (affirmation - translator's note)  and plays the role of yet another conditional speech particle: For example the apparently paradoxical statement Da net (да нет, “Yes no”) means something like “Of course not.”

The most frequent word found in the speech of modern city-dwellers is Ne (an abbreviated Net, or “No”) and not because speakers contradict things a lot, but because this particle simply serves as a cue in dialogue; it means “Wait; now I will speak.”

In order to summarize something said above, there are also formulas of speech: for example v takom dukhe (в таком духе, “in this spirit”) or takogo plana (такого плана, “of that sort”). In recent times, the most popular from this series has become the expression Kak-to tak (Как-то так, “Somehow like this”), which roughly means “This is how it turned out, don’t judge harshly.”