Russian slang for the rich and poor 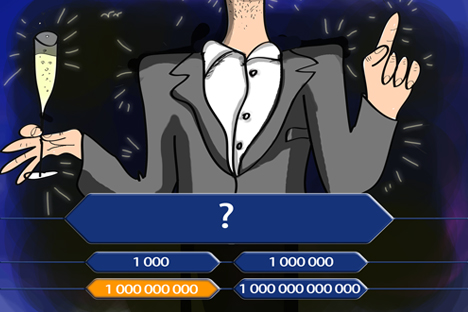 Over the past 20 years, money has become the key criterion of social status in Russia. This has led to the emergence of some new terms, with several old words having acquired a whole new meaning, as well.

One newly popular word in Russian colloquial speech is oligarch. Previously, its use was confined to history books; now it is part of everyday Russian vocabulary. Its meaning has also changed: One no longer has to be in government to qualify as an oligarch.

The word can also be used to describe people who are merely very rich — i.e., captains of industry, successful entrepreneurs, and owners of large companies.

The social class of oligarchs also has its own hierarchy. The richest of them are worth billions of dollars. Those who have yet to acquire their first billion are sometimes ironically called oligarch-lite. In the opinion of ordinary Russians, any self-respecting oligarch is obliged to own a mansion somewhere along Rublevskoye Highway, just outside Moscow.

The Rublevka district has become a byword for fabulous wealth. Those not-quite-oligarchs who cannot afford a mansion in Rublevka prefer to build their country homes along Novorizhskoye Highway. The word Novorizhskoye sounds a bit similar to nouveau riche, which means "the new rich" in French. The name of the second most affluent district outside Moscow therefore appears very apt.

Clichés in speech and filler words

Rublevka and Novorizhskoye are not part of Moscow proper. The city of Moscow is separated from the suburbs by the Moscow Ring Road, or MKAD in Russian. Commuters living beyond MKAD are sometimes dismissed as zaMKADyshi (a mutation of zamoryshy, Russian for “starving people”)—i.e. losers who cannot afford a home in the capital itself.

Formally, Rublevka also lies beyond MKAD, but calling its denizens zaMKADyshi would obviously be absurd. To some extent, this paradox is explained by the fact that, apart from their Rublevka mansions, oligarchs also own apartments in central Moscow.

Modern Russian offers a much larger choice of slang words for the less affluent. For example, nishchebrod, or “pauper,” is listed in Russian dictionaries as archaic and obsolete. However, it has recently been given a new lease on life; calling someone a nishchebrod is a contemptuous way of indicating that the person in question is not as wealthy as the speaker. For example, a billionaire might dismiss a millionaire as a nishchebrod, in full accord with the popular Russian joke: “Who wants to be a millionaire? Everyone except billionaires.”

The old Russian slang word lokh, analogous to the English “chump” or “sucker,” is probably the most commonly used way of insulting the poor. Lokh also has an interesting connotation: It means that the person is poor specifically because he is guileless and easily deceived. A lokh is not someone who does not make money because he is lazy or lacks initiative. Rather, it is someone who can be easily parted with what little money he has.

Budgetniki is a fairly neutral word to denote those who are not exactly well-off. It means state employees whose salaries are funded from the state treasury, or “state budget.” They usually earn a lot less than people employed by private companies, let alone those who actually own these companies.

The word budgetnik is almost synonymous with “poor,” just as budget class is synonymous with “cheap.” That being said, the budgetniki group actually includes many highly educated and hard-working people, such as doctors and teachers, whose state-paid salaries remain low.

It is traditional in Russia not to make any direct connection between working hard and becoming rich. As one popular Russian proverb says, “One can't earn a castle through honest work.” Being rich is usually held to be the result of guile, luck, or a happy coincidence. Typical protagonists of Russian folk tales are Yemelya, a village loaf who catches a magic fish that grants wishes, and Ivan the Fool, who marries a princess and receives half a kingdom in dowry.

Becoming rich is seen as winning a game of chance; it is no coincidence that another popular Russian word for the poor is luzer (“loser”), a term recently borrowed from English. In contrast, delets, one of the Russian words for “businessman,” has strongly negative connotations. A delets is a swindler, a con who makes money by ripping off other people.

There is certainly some degree of truth in Russian folklore. It is no secret that very few of the present-day Russian oligarchs have earned their riches through hard work. Most of them simply happened to be in a position to grab lucrative state-owned assets during a campaign of privatization 20 years ago. It is quite telling that one of the most popular Russian advertising slogans (and Russian morals, for that matter) is vse i srazu: “I want it all, and I want it now.”

Those in the current generation of Russian schoolchildren seldom aspire to become scientists or artists, let alone doctors or teachers. They want to become bureaucrats in government employ. This seems like a paradox: Aren't state employees supposed to be budgetniki, or poor? The trick here is that the bureaucrats' relationship with the state treasury is not limited to receiving their salaries from that treasury. They also get to decide how money from the treasury is being spent. This opens up lucrative opportunities to spend government funds in ways that also feather the bureaucrats' own nests.

There is a special word in Russian for these shenanigans, which may include setting up special companies to siphon off state funds — the word is schema. It is no coincidence, either, that another word, osvoenie (“appropriation of budget funds”), has acquired all kinds of dodgy connotations. That, however, is a matter for the police, not linguists.