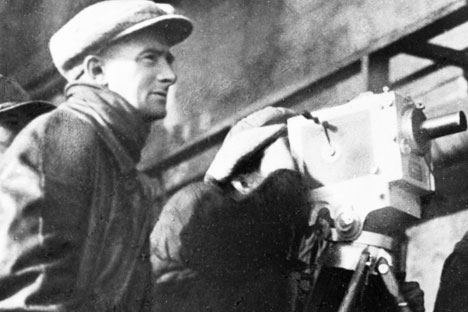 As an experimental pioneer, Vertov was avant-garde in the original meaning of the phrase: he was ahead of his time. Source: RIA Novosti

This month, for the first time, the British Film Institute’s “Sight and Sound” magazine launched a “Best Ever Documentaries” poll in parallel to its long-running vote every decade for the greatest films of all time. At the top of the new documentaries’ poll was Dziga Vertov’s mesmerising film “Man with a Movie Camera”. Editor, Nick James wrote: “To have a silent film from 1929 at the top of the list is an absolute joy.”

Making sense of the world

On Sep. 10, in the South Bank’s Purcell room, Londoners can watch extracts from this film before a concert of music by Rachmaninov and Shostakovich, and decide for themselves what makes it so great and so relevant. The documentary was voted 8th best film ever made in the 2012 “Sight and Sound” poll and features in numerous other critical top tens.

Of the 340 critics and film-makers polled by “Sight and Sound” this summer, 100 voted for “Man with a Movie Camera”. Brian Winston writes in September’s issue of the magazine about Vertov’s dynamic approach to film conventions: “He superimposes, splits the screen, deploys fast- and slow-motion and extreme close-ups, and animates using stop-motion.”

The documentary uses a bewildering array of techniques that helped to create the language of movie making: freeze frames, jump cuts, Dutch angles and focus-racking. Filmed in Moscow and other cities, it shows a whirlwind of impressions in an urban day, from details like pigeons on a roof or lift doors opening to serious events: one couple gets married, another divorces; one woman weeps by a tombstone, another gives birth live on screen.

Vertov, who was born David Kaufman, chose the name Dziga Vertov partly because it means “spinning top” in Ukrainian; the pseudonym is apt since his film, with its whirling wheels, machines and carousels, revolving doors and engines, cogs, reels, bobbins and the handle of the camera itself, reflects the pace of life in the industrialised world.

Dr Jeremy Hicks, Reader in Russian Culture and Film at London’s Queen Mary University, is the author of a recent book about Vertov. He told RBTH: “I think that Vertov's “Man with a Movie Camera” appeals to people because his film seems to chart the process of making sense of the world, of an urban, fast moving world.”

“Man with a Movie Camera” opens with a written prologue, almost a manifesto, announcing: “This experimental work aims at creating a truly international language of cinema based on its absolute separation from the language of theatre and literature.” The BFI summary calls this “a radical statement of intent for a film that still seems radically modern and pertinent today”.

As an experimental pioneer, Vertov was avant-garde in the original meaning of the phrase: he was ahead of his time. When he first made the film his contemporaries, both in Russia and the West, attacked or dismissed him. Sergei Eisenstein called his documentary “cine-hooliganism”. But Vertov persisted in believing that what he called the “Ciné-eye” could be a radical force for good. “Our eyes,” he wrote, “see very poorly and very little … the movie camera was invented to penetrate more deeply into the visible world”.

One shot of buses leaving the Bakhmetevsky Garage is especially resonant today. The garage, designed by avant-garde architect Konstantin Melnikov in 1926, was neglected and nearly demolished before being restored in 2007 to serve as an art gallery. It now houses Moscow’s wonderfully hi-tech Jewish Museum and the building, like the film, is iconic in a style that took time to appreciate.

Besides recording his dizzying kaleidoscope of a Soviet life-in-the-day, Vertov also reflects on the actions of creating the film itself. As the BFI’s Winston says: “Most surprisingly, he shows us the processes whereby a documentary is made.”

We see the “man” of the title (actually Mikhail Kaufman, the director’s brother) carrying his camera through the crowds, riding with it on cars, trains and motorbikes, or climbing factory chimneys for a panoramic shot.

We also see Vertov’s wife, Elizaveta Svilovo, editing the film, cutting and pasting individual frames. And we see the audience watching a film, making us reflect, like Brecht’s “alienation technique” in drama, on the process of being a spectator. Hicks feels that the film’s “insight into not just observing, but filming, editing and sharing that perceptual journey seems to anticipate our digital world, and for that reason seems more at home in our world than in the 1920s”.

Vertov’s global influence was slow, but ultimately huge. From the 1960s onwards, his films were “important technical manuals for movie-makers in the West,” writes Hicks. Jean Luc-Godard was one of the film-makers belonging to the radical sixties and seventies consortium known as the “Dziga Vertov Group”.

Even more than the playful techniques Vertov used, there is something about the spirited enthusiasm for modern life in “Man with a Movie Camera” that appeals more than ever to 21st century audiences. Hicks told RBTH: “Today's viewers of the film may lose some historical, ideological and social context, but seem to connect more productively than ever with the film's dynamism and optimism.”